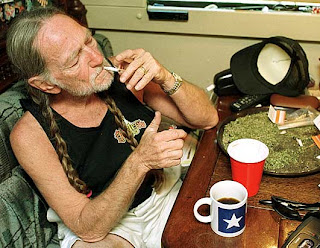 In celebrity drug bust news, Willie Nelson was arrested for attempting to smuggle six ounces of mary jane and an unknown amount of magic mushrooms on his tour bus. He was stopped at a border stop near Sierra Blanca, TX (approximately 90 miles southeast of El Paso/Juarez). The inspecting officer smelled weed and yadda yadda yadda...Willie Nelson and two others were arrested. Still unclear if Nelson's tour bus passed over the border, or if they were stopped at a routine checkpoint on the highway. Sources claim that Nelson was en route from California to gig in Austin.

We love that Willie Nelson is in his late 70s, continues to be a huge stoner and big proponent of marijuana. Willie even has a marijuana strain named after him by Dutch growers which won the Cannabis Cup in Amsterdam a few years.

However, as much as we love Willie's penchant for weed, we here at Coventry are tour vets and have to call him out for being incredibly stupid on two accounts...

1. Never drive drugs into the US via the Mexico border. Shit, even if he didn't go into Mexico, you have to be a little more careful driving with drugs thisclose to the border.

2. And if you are "riding dirty", it's best to not be smoking weed while going through border patrol.

Well, Willie, I hope you have a good lawyer.

By the way, here's Willie performing Super Man with Snoop Dogg in Amsterdam...

Unknown said…
Wellie and MJ go way back. Certainly past the point of no return. He is a very successful musican and a very active elderly person. What are the negative side effects of MJ? The old time conservative view seriously needs to be challnged. Since there is power in numbers, every enthused pot smoker can come together and go the same Texas border patrol point with large sums of MJ. Like if there were 10,000 - 15,000 people in attendance as a show of force, the authorities would not be prepared to arrest that many folks. Perhaps, if the people pushed back a little, we could evolve from this state of stagnation.
11/28/2010 5:57 AM