"You might want to watch your speed," warned Javier to our driver, Igor, whom we found on Craigslist at the least second. We didn't want to take the sketchy, dilapidated bus from Port Authority in NYC down to Atlantic City. A decade ago, in my days as a wanna-be poker pro, I spent more hours than I could count riding the bus from NYC to Atlantic City with a gaggle of octogenarians and skeevy degen gamblers, many of whom you wondered how the hell they scratched $25 together to afford the bus, let alone had sufficient funds to gamble in a casino.

Luckily, Javier found us a ride from NYC. All I had to do was show up at Union Square at noon on Friday.

"You might want to watch your speed," Javier told Igor, as he hauled ass down the Garden State Parkway.

"Don't worry," said Igor. "I won't get caught. I shouldn't even be driving. I don't have a license. I'm on probation and really should not have left the state. I have no intentions of getting caught with cactus dust."

I missed tour. The excitement. The anticipation. Riding dirty on the New Jersey freeways. Just like old time, eh? I just sat in the back and wondered, "I shouda took the bus... and... what the fuck is cactus dust?"

Our driver was doing dippies of the green powder and Javier talked him out of doing whippets while driving. We smoked a blunt to block out the chemical-tainted smells synonymous with New Jersey. Luckily, we switched drivers about halfway and Javier navigated us into AC -- despite massive tilt-inducing Shore traffic plus construction.

We settled into our hotel, the newly-refurbished ACH (formerly the Hilton), a little later than planned. Javier booked the ACH because of its proximity to Bader Field and very close the poker room at the Tropicana.

We quickly pre-partied in the room, skipped Shakedown, then headed to Bader Field. My first impression was how small it was compared to some other festival-type shows I attended. Bader looked like the best of both worlds -- a festival environment but with the intimacy of a regular show (like Tahoe). I dunno how many people were in attendance, but scalpers were gobbling up extras for as low as $20 and you could find extras floating around for around $40.

We settled in about thirty yards back from Fishman. Phish took the stage at 7:45pm... with the sun just about to set. 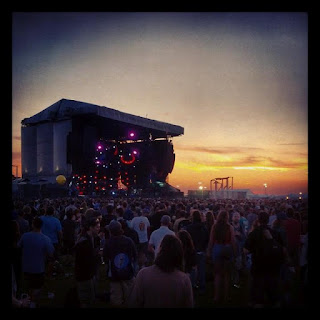 Photo by David Vann © Phish 2012
Javier was at both Worcester shows and called AC/DC Bag anyway. After "Woostah Reprise" in Bonnaroo, I was wondering if Phish was going to get back on track of their commitment to play "200 songs" this summer.

Anyway, Phish busted out the speed-grass early on with My Sweet One. It's a fun tune and a sort of "fuck you" to the Snookification of the world. Alas, this wasn't going to be a meat-head Jersey Shore show. Not one spray-tanned meat-head reference (despite the annoying clown in front of me who screamed "Meatstick!" between every fucking song.)

The boys used 46 Days as jamming vehicle the last few years. Despite it's placement in the third slot, the boys gave us a glimpse of the rest of the AC run by unleashing a tight, yet jammy rendition than you don't expect from a typical first-set jam.

Things really perked up during the beachy funk-filled one-two punch with Camel Walk and Tube. Listen to this Tube if you haven't already. My biggest criticism of Phish 3.0 is the rip chord jams and unfortunately Tube has been one of the casualties. Ah, but not this version. The boys really tweaked Tube to my liking... even though it was only a couple minutes longer.

On the way to the show, we heard Cities and Javier made a crack like, "I'm not a fan of this anymore. How about you Pauly?"

"I prefer different Talking Heads' covers like Crosseyed and Painless or Psycho Killer. But you know you just jinxed us, right?"

Yes, Javier turned to me during Cities and apologized for being the mush. I didn't mind the compacted version. Phish kept up the heat with Ice, followed up with a rare Ginseng Sullivan.

Stash was the longest song in the first set, around 12 minutes. The jam was a big "meh" until Gordo-Page's interplay sucked me back in... and boy was I glad jumped back into the fray.

A non-sandwiched Simple perked up the crowd that lost their marbles during Stash. The uppity version gave way to a bubbly The Wedge.

I always have mixed feeling about Stealing Time from the Faulty Plan. It was a solid version, but would've been stoked for a searing Antelope or some sort of Wolfman's shenanigans. Coil closed out the set. As soon as I heard the opening lyrics ("I saw Satan standing on the beach..."), I really got it... Satan lives in Atlantic City.

I used to think Satan lived in Las Vegas (where I lived/worked on an off since 2005), but I realized that Satan just rents a timeshare in Vegas, but his home base is AC... "where the sand turns to gold."

We were in a weird, yet sacred place. AC is one of the most depressing beach resorts on the eastern seaboard. Ever since I was a little kid, AC conjured up images of wiseguys, old people, and plight. It was a little perplexing why Phish chose AC to play three shows, but then again, being so close to the beach and mighty ocean created a vortex of unparalleled energy. Bader Field was the crossroads of nature, the degen dark side of humanity, the collective energies of 20,000+ elated Phisheads, and the band making contact with the Mothership through their musicianship and CK5's lighting schemes.

Sometimes the boys stumble into songs with awkward segues, or rip-chord segs because Trey wants to wank off with one of his show-off tunes. Alas, the segue into Back on the Train was as smooth as can be. The boys prepared a quick feast of southern-fried funk.

Twist > Piper had shades of yesteryear. That was one heck of a dynamic duo in the late 90s, but it was good to see Phish throw us that one-two combo. Twist was unique because the "wooooooooooooooooooooos" managed to stay on the tip of everyone's tongues during the Piper intro. I was astonished that the crowd was able to keep in time. It was one of those rare moments at a show when the hair on your arms stands up and you get goose bumps. A magical, yet serendipitous moment for sure.

The second set was good, but it failed to be a great set because of a couple of poor song selections that just didn't mesh with the rest of the set. I'm talking about Heavy Things and Billy Breathes. I understand the need to mix up the tempo and give Fishman a break from time-to-time, but when you're in the trenches, dancing your ass off, the last thing you want to hear is a slow-Trey tune that killed the sultry vibe. Billy Breathes lacked sex appeal. To be crude... after hearing Birds, Twist, and Piper... getting Billy Breathes is like farting in the face of your girlfriend when she's going down on you (or conversely, she farts in your face when you're going down on her).

After a brief interlude with Billy, everything back on track with a funkified-cover of Sneaking Sally. Page was slaying the electric-boogie by pecking away on the clavinet. A sizzling Bowie ended the set, which was peppered with a slew of teases from songs played earlier in the night including Stash, Ginseng, Simple, and a few more (I haven't listened to the show yet -- interubes sucks in the ACH so I couldn't download the show).

The First Tube encore delivered. As expected. Big Red was bouncing up and down like a little kid who has ants in his pants. I always get the feeling that as much fun Trey is having, Gordo is the opposite and looked bored to death.

The first night at AC was a magnificent display of Phish jamming out songs they normally don't open up. Javier summed it up the best, "I liked the song selection better in Worcester, but they are playing much better and tighter in AC."

After the show... things got spooky. After Midnight in AC has a totally different vibe than Vegas. The freaks rule the streets. The nitrous mafia were out in force post-show and descended upon the scene like vultures wearing gold chains and track suits. And if you were not from Jersey, then you had a chance to meet a real-life mob guy. A bunch of Big Pussies and Paulie Walnuts were dragging tanks around just a block or two from the Boardwalk. Even Igor indulged with a few balloons. He told us about how he was almost locked up by AC's po-po. The officer walked up behind him and popped the balloon, and in doing so, Igor got clocked in the face. He apologized to the cop and ran away.

We spent the rest of the night wandering around the Boardwalk and toking up on the beach. I opted not to play cards at the Trop... because I didn't want to wait for a table. Satan was tempting me around every corner. The craps table was calling out my name. Alas, I headed back to the ACH and got re-acquainted with the cactus dust. That's when things got.... fuzzy.

It's good to be back on tour. One down in AC, two more to go.

* * * *
FYI... check out the setlist for 6/15/12 here. For setlists, recaps, and videos of other shows on this summer tour... check out our 2012 summer tour index page.
Labels: Atlantic City Phish Phish Summer Tour

GMoney said…
Nice Recap except for the analogy about Billy Breathes and the farting while getting munched. That is disgusting and I suggest that you take that part out immediately.
6/16/2012 4:15 PM

cowphunk97 said…
Nice recap. I especially love your insight about Billy Breathes and fart munching... That comment changed my life, it changed my life.
6/20/2012 11:19 AM