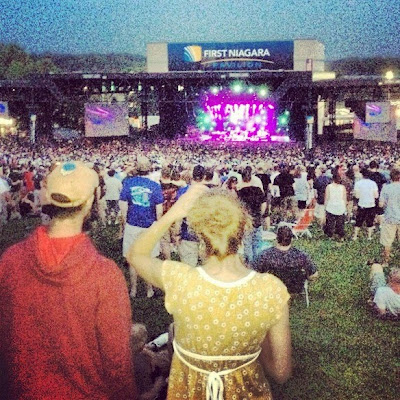 I love being on the road. Following Phish is a bonus, waking up foggy and groggy in one strange place then hitting the road, cranking up tunes, and driving to the next show to invade a city then party it up to the wee hours, only to repeat the process the next day.

I woke up in Cincy on G-Money's couch. We stayed up too late partying and got on the road two hours late. Iggy was driving and took on the responsibility for getting us to the next two shows. We made an ice run and a quick trip to Radio Shack (chargers are essentially on tour in this digital age) before making the trek to Burgettstown...which took us through Ohio and a sliver of West Virginia before reaching the Pennsylvania border. Along the way we stopped at Cracker Barrel for grub, which I only get to eat when I'm on tour.

The venue at Burgettstown used to be called Starlake before the name got whored out to corporate sponsors. Starlake was the location of several historic shows in Phish's past. It was also where Iggy saw his first show in 2009 and had a religious-like experience during Divided Sky. He's been hooked ever since.

We arrived at the lots around 5ish. The concrete and gravel lot is spread over rolling hills. I saw a bunch of shitfaced kids get cuffed by the po-po for underage drinking...but aside from that it was a mellow lot scene.

We had pavilion seats and the line to get in was redonkulously long. The pav's security was pretty tight so our section was not overrun by wooks, although the folks near us were pretty shady, something out of the World of the Wonderful Whites. One older guy in a Hawaiian shirt looked like a bloated, coked up version of Huey Lewis. His guests included a smoking hot hipster girl, his gay partner (picture Anderson Cooper in Tevas), and a straight-up tweaker. No other way to describe the tweaker. He was cooking on some primo-crank.

"Looked like he was on a pogo stick all night long, jumping up and down," said George.

Funky Bitch opened the set and set the theme for the show...Trey sat back and let Gordo take control most of the night, and he didn't step on Page's toes either. I think my favorite shows are the ones when Trey steps back. Fishman's drum work was in peak form during in the first set compared to his inconsistent performance the night before in Cincy.

I prefer Backwards in the first set because it is a poppy-happy song made for when the sun is setting. It's a buzzkill late in the 2nd set. During Backwards, coke-tard Huey Lewis started bothering me with his incessant air guitar. I mean, doing air guitar is not uncommon at a Phish show. Heck, I do it sometimes but only during shredding tunes like Zeppelin covers, but rocking out during Backwards? That's sketchy. Keep snorting bath salts, brah.

Iggy was pumped for his first Gumbo, which added a lil Nola-slammin-funk to the mix. I dig it when Gordo unleashed the "Goooooooooossssshhhhh!" sounds on his bass.

Mid-set Maze didn't pack the same punch as some of the smoking versions from the last few summers, but it was a funtastic jam nonetheless. Page was kicking ass and taking names and Trey didn't wank off as much as he usually does.

I've been chasing Torn and Frayed the last few tours. The Stones cover always gets played whenever I jump off tour. Torn and Frayed one of my favorite tracks from Exile on Main Street because it sums up the bittersweet lifestyle of being a touring rock and roll spectacle. I wonder if the band doesn't play it too much because the lyrics hit too close to home??

Moma Dance was aborted during the Cincy show, but the boys were ready (especially Fish) to unleash a little white-boy-cow-funk. The tweaker in front of us looked like he was having a seizure. You could smell the crank-manufactured chemicals seeping through his sweat glands.

Iggy was intrigued by the Scent of Mule shenanigans, especially Page's experimentation with the theremin. The band looked like they were having a blast onstage. That vibe is infectious and spilled over to the crowd. It was hard to find someone around me who wasn't having fun, well, maybe except the amateur who passed out midway through the set.

Before the show, a schwilly wook nearly attacked G-Money in the lot and screamed, "46 Days tonight brah!! They're gonna play it!!"

The wook must have had ESP or be dialed into the Mothership or something because 46 Days popped up near the end of the set. Trey was ripping up the 46 jam.

The first set did not contain the "bustouts" and old school gems that many phans were anticipating. However, we got YEM for the first time all summer. Well the band holds back heavy hitters like YEM, the crowd goes berserk when they eventually play it.

The first set was solid without YEM, but adding YEM to the mix was a wise choice. Very strong and consistent set. I was having much more fun than Cincy and the show was only half done!

Iggy was convinced that CK5's lights were set up to hypnotize the audience, especially during the YEM jam.

The second set opened with a subdued Gotta Jibboo. I felt they could have taken off at any moment during the jam, but kept it a little safe. They waited until Mike's Groove to really unleash the beast. It had everything: 2001 teases, UFO lights, and Gordo dropping bombs. The middle of the second set featured some intense jamming. I felt the band returned to reconstructing monstrous second sets like they did during the Atlantic City run last weekend.

Talk about some heat. The Burgettstown Weekapaug is a must hear. I can't recall a better or more titillating Weekapaug I heard in 3.0. I'm not saying they've been phoning it in, but the Weekapaugs lacked the same panache when compared to the sizzling versions of Mike's Song.

The Light jam was a pistache of Afro-Caribbean elements including Page's plinko-pecking. Weekapaug that gets all the accolades.

"It was not predictable bass-funk slap," said G-Money. "I like it when they don't go from Mike's right away into Hydrogen and Weekapaug. That's a neat little trick."

As G-Money said, they gave us a couple of other songs and jams before they finished up the Mike's Groove sandwich.

Seven Below could have been an epic jam, but after experiencing the delicious Weekapaug jam, it was going to be nearly impossible to top it. The boys peeked into the deep end of the Seven jam, but didn't stay very long before the turned back.

Bouncin' was the first "Pauly Takes a Piss Song" in the five shows I've seen this summer.

Julius was rocking as per usual. Trey was wanking it up as per usual. The crowd lapped it up as per usual. The tweaker in front of us was going nuts with a balloon that he thought was a soccer ball. He was kicking it around while spinning in circles at the same time. He must have picked up a whiskey tango chick at setbreak because she was with him in the second set. It smelled like they were smoking DMT during Julius. Then again they were probably smoking doobs sprinkled with meth.

I thought Julius was gonna end the set, but we got an extra treat with Slave. It's my favorite Phish song and any time I see Slave, it's a good show.

The folks with the Lizards' sign up front must have been stoked to get a Lizards encore. Trey was jumping up and down like a little kid and the crowd was belting out the chorus. When the band has fun, the crowd has fun. Burgettstown is the perfect example of that simple philosophy.

So we didn't get the bustouts everyone was expecting in B-town, but we got YEM for the first time this tour and a crowd-pleasing Lizards encore. I was pumped for Gumbo, Torn and Frayed, Seven Below, and of course Slave.

Burgettstown was my 251st show, but more importantly, it was my 100th show in the 3.0 era. I'm so damn lucky because I never thought I ever see a single show again after the Coventry debacle in 2004, let alone 100 shows...so everything I've seen the last four summers has been gravy. It's really been fun turning on friends (like Iggy and Benjo) to Phish this time around. I can never thank the band enough for spicing up my life. Enjoy every show like it's your last one because you never know when the band will pull the plug on the Phish carnival.

Next stop...Cleveland and Phish at Blossom.

P.S. This recap is super late. Such is life on the road. We had a crazy situation late last night (e.g. see Iggy's stained pillow) and got stuck in a tweaker-motor lodge somewhere in bumblefuck Appalachia. No wifi, of course. We somehow survived without getting enslaved as a gimp for a rural clan of hillbilly sex fiends. I'm writing this via my CrackBerry in the parking lot of a gas station somewhere 20 minutes outside Blossom.
Photo by Marcus Edmund via @Phish_FTR.
Labels: Phish