For a second day in a row, phans braved the elements to see Phish throw down at Deer Creek. Outdoors shows are always a gamble because of unpredictable weather. The day after we survived brutal triple digit temperatures, a storm ripped through Indiana and fierce winds decimated everything in its way. Luckily everyone camping out got a warning before the storm reached Deer Creek and no one was injured.

Phish always cranks it up a notch whenever their phans get caught up in shitty weather. It's sort of their way of honoring their loyal followers, who will stand through a tornado just to hear their heroes urinate in their ears.

We arrived at the lots and found Snailtrax and Meg. I hit Shakedown and sold a bunch of 2001 and alien stickers. I found a wook slinging high-quality liquid, but he was so far spun he thought I was an undercover cop. I decided to fuck with him.

"I'm actually CIA," I softly whispered. "You have two choices: give me your entire stash and crystals, or you spend the next five years locked up in Gitmo where you'll do the naked pyramid with terrorists and Jihadists."

He babbled nonsense for a few minutes before I let him off the hook. I love messing around with spun-out wooks in the lot. BTW, despite the rumors, I do not have ties to the intelligence community, although whenever I fly to South America for work, without fail someone will accuse this "gringo" of being a CIA spook.

A lot of people see Phish sober. I've had my fair share of those shows in 3.0, but I got snookered last night. Every once in a while I go off the deep end and let it all hang out. I ingested a dose of killer liquid sunshine and must've tore through a half gram of molly by the time the show ended. I hadn't been that spun since I got puddled in the lot at UIC. As a result, I had the most fun out of eight shows I caught this summer. Tripping balls at Phish with my friends. You can't beat that experience. Heck, almost 12 hours after the show I'm still schwilly (as I write this review on my CrackBerry while Mr. Fabulous navigates us to Alpine Valley... oh and thanks to my crew of copy editors back home on couch tour fixing all my errors).

Phish resumed their quest for 200 songs by treating the crowd to a slew of first-timers (this tour), but they continued their trend of smoking the shit out of the second set. This magical night was anchored by a DWD-Sand tsunami.

I had a crappy pav seat but all my friends had lawn tickets so instead of raging solo, I joined a group of 8 or so folks from Cincy. I had pavs the rest of the tour so I decided to have a lawn show for the first and only time this tour. I had an out...if everyone around me was too fucked up and too chatty, then I could always run into the pav. We had a good crew around us, so I didn't have flee the lawn.

Last week Iggy wanted to know what Crowd Control was all about, so I showed him "Specimens of Beauty" mini-documentary. He has an odd quirk at mixing up song names. He thinks Carini is "Caprini", and referred to Crowd Control as "Crowd Confusion." It was odd that Phish opened up with that 2.0 tune instead of a slew of rain/storm songs to choose from. I was convinced Harpua and Water in the Sky and Drowned were coming so I loaded up on those for my phantasy pool (I also picked Rock and Roll but got stiff-armed by Page when he opted for a different tune from Velvet Underground's "Loaded").

I was thrilled to hear deep cuts like Dinner and a Movie, MOUND, and Mango Song. Those were tunes were in heavy rotation when I first started following Phish in college circa the early 90s.

Sweet Jane came out of nowhere. I had not seen it since the epic Halloween show in Vegas in 1998. For a second night in a row, Phish covered a Velvet Underground song. Rock and Roll is a popular track for the boys and Page unleashed a few "Sweet Nuthins" in 3.0, but Sweet Jane fell off their radar. I was just happy to hear it. Sure, it was rusty but nothing will ever top the Vegas version of Sweet Jane. 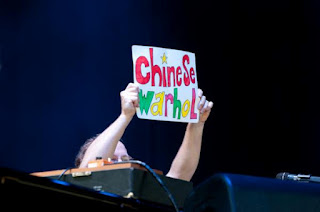 Photo courtesy of @Phish_FTR
We got a little stage banter and the band addressed the "sign" issue. Trey mentioned that the band sees phans' signs from the second they hold it up, so the selfish sign people don't need to hold up their requests for long periods of time because it obstructs the view of other phans. Trey picked a sign from the crowd but said he didn't want to encourage others to keep bringing signs. Apparently Page is very anti-sign. Trey held back Page who could have gone on a PT-inspired vitriol-laced rant, but the message was clear: leave the signs at home.

Oh, the "Chinese Warhol" sign was for Limb by Limb. Fishman is always the MVP of that song when he unleashes his inner octopus.

Hey, at this point you just have to sit back and enjoy it. Despite the high frequency of Possums, at least the band knocks it out of the park every time.

It was time for a cover song -- David Bowie's Life on Mars (which was soundchecked along with Joy). The Mars theme continued with BBFCFM.

"I love the hard-rocking head-banging shit," said Iggy. "It would be interesting to see Phish do an entire heavy metal set."

After a raucous and rowdy BBFCFM, the band took it down several notches with Strange Design. Iggy bailed to buy beers. I smoked tough, while Page crooned the crowd. He makes Phishy chicks get super damp with love ballads, essentially guaranteeing post-show booty.

Birds of Feather has become a monster jam vehicle this tour, but I figured a first set version would be very tame. Indeed, it was a quickie...just like ripchord Halley's Comet. They got it cooking then stopped on dime in favor of the Beatles' While My Guitar Gently Weeps.

"I was pissed about ripchord Halley," said Mr. Fabulous, "but they made up for it with WMGGW."

Trey tore up the solo and the boys ended the first set with a third cover song of the night, and the 8th first-time-played song of the summer.

The lights went down for the second set and we were ready for some master blaster action. My brain was fried but I was nowhere close to peaking. I kept rising higher and higher during the set...and the band kept up their frenetic pace.

Gordo kicked off the second set with the squishy bass intro to Down with Disease. Glowsticks exploded in the air above the lawn and I was bugging out on crazy visuals with thousands of multi-colored tracers zig-zagging throughout the Indiana sky. This savory version of DWD clocked in at 15 mins and had a couple of nods to Coltrane again (but nothing concrete like Pine Knob's DWD). Gordo was laying down the law with his master blaster badass bass playing. I was putting out the vibe for 2001. CK5 tried to egg the band on with a series of UFO-inspired lights. The band shuffled through an ambient layer of fog before Trey introduced the opening licks to Sand. The boys patiently made their way into a thunderous Sand with an extended, yet stripped down intro. Trey was holding back notes and Gordo was en fuego with his bong-rattling bass. Page milked the clav as the band delved into corn-funk territory. Trey maintained his sparse playing, thereby allowing plinko Page and Gordo to swap off leads. I swore I heard a Weekapaug tease from Trey at one point.

They wrapped up Sand and took a sharp turn into Twist. I caught a couple of sizzling versions this tour (AC and Cincy). They couldn't match either of those high-water marks with a Deer Creek quickie. That was the only time I was bummed out in the second set. I wanted them to explore another Twist jam, but instead they forced Rift on us. Sure, it was a rocking version, but my mind and body was jonesin' for a jam-tastic Twist.

The crowd lapped up Gin, which was compact and high-octane. They kept the jam brief but never went too far off the reservation. The band threw the crowd another bone with Fluffhead. Yeah, they pulled out of a Gin jam in favor of a crowd-pleasing Fluff. Much like the one I caught in AC, this version was smoking.

A late-set Ride Captain Ride appeared out of left field. I love it when Page shreds covers like the one-hit wonder from Blues Image.

"Ride Captain Ride kept up the high energy," said Mr. Fabulous. "So happy they didn't kill the vibe with a slow tune."

So true. I would have been miffed if they threw in a slower song like Joy, which would have destroyed all the momentum the band built up over the first hour of the second set.

A searing Antelope closed out the set. We got some Marco Polo hijinks during the Marco Esquandoles segment, including a Twist lyric. The Trey wank factor hit a new high during his superfluous shredding.

Sometimes Phish plays a smoking set, only to ruin it with a shitty encore. Not this time. We got a trifecta that included a blistering Cavern, a nod to Junta with Sanity, and the big red machine's explosive, masturbatory-filled First Tube. Trey was jumping up and down like a downtrodden sailor with a bad case of crabs. First Tube knocked me on my ass. That's how you end a show...with a ducking exclamation point!!

It's always a positive sign when phans (skipping Alpine Valley) walk out of the venue thinking about how bummed they are because they're gonna miss the next show.

Shakedown was raging after the show. The federales were busy trying to chase down the nitrous mafia, but the balloon mongers won out once again. They walked away with fistfuls of cash while destroyed whatever brain cells phans had left after the two-night run at Deer Creek. I was tripping balls so hard after the show that Zeke and I were fascinated with the grass in the parking lot. Intense visuals. The ground was breathing. Whenever a car drove by, the shadows cast from the headlights made it look like an army of snakes were slithering through the grass.

By the way, the "master blaster reference" came from an inside joke from the Cincy crew. I had seen someone in the lot selling a "master blaster" burrito and mentioned it a couple of times.

"You know what a Master Blaster really is?" asked Zeke.

"It's when you're getting a blow job and smoking a hit of crack at the same time," Zeke explained.

That summed up the second night at Deer Creek perfectly. Master Blaster. The first half of DC-AV run is over. We survived Indiana. Next stop...Wisconsin.

Also, don't forget to check out our master index page of all of our Phish summer tour 2012 coverage.
Labels: Deer Creek Phish

Ray said…
I want to say I love your blog and the commentary on the shows you're at. My crew sounds super similar to yours.

These last 2 nights look like total FIRE from Phish!! I'm listening to last night now, and WOW!!! One of the best of 3.0 imo. Wish I was there!! I love reading your stories on here man. I would have similar stories but I'm lame and cant do much of leg 1 due this new jobbie job.