I was raging solo. My girlfriend had to work on Monday morning so she drove back to L.A. and I stuck around for the final night of the three-night run at Bill Graham Civic Auditorium. It's one of the most intimate venues I've seen Phish play outside of the tiny clubs in Japan during their 2000 tour. The ghosts of every legendary Bay Area musician roam the hallways and haunt backstage including the man himself... Jerry Garcia. Even the wispy apparition of old Jerr-Bear wanted to catch a glimpse of "the Phish from Vermont." The Grateful Dead put their mark on Bill Graham's joint and since then, it's become a sacred vortex of energy. Over the last few nights, Phish tapped into that abundant supernatural vortex as they blurred the lines between entertainment and alchemy. I just hope they can bottle up some of that dynamic vigor and take it with them on the rest of summer tour.

In this instance... believe the hype. The setlist looked phenomenal on paper and it held up in real life. At this point as I creep toward 300 shows, Phish come in three categories: 1) shit shows, 2) good/average shows, and 3) scorchers. Phish shows are like orgasms. Every one I've ever had was spot on. Webcasts are like jerking off. Sure, you get off, but it's a lot more fun if you have a partner... or multiple partners if you're into deviant orgies. With that said... I always have fun at Phish no matter how bad they play but I certainly have more fun when they kick my ass. Mostly every show I see falls into the second category. Phish really has to fuck up shit badly in order for it to be a shit show... and yeah, the 2.0 era were littered with those. I even caught a few 3.0 shit shows but for the most part I'm catching an average Phish on any given night. They really have to blow the roof off the fucker in order for me to rank it in the "scorchers" category.

Yes... Sunday night was a scorcher. This is the highwater mark that will be used as a measuring stick for the rest of tour... maybe even for 3.0. The night had a little bit of everything that makes Phish grand, but when it comes down to it, the second set is the perfect example of why I drop everything and follow Phish.

The first song is always a throw-away tune, so I actually prefer if the opener is something I don't really dig (e.g. Crowd Control). I spent the time smoking tuff with @TourTweet near the taper's section in the middle of the floor. We were in the most optimal spot in the venue sound wise and the perfect place for people watching.

Party Time set the tone for the night. Sunday was the third and final show of the run... which means everyone is eating/smoking/snorting their entire stash. I had reached the pinnacle of fuckedupness for the run... and probably the most lit I've been since I lost my marbles at Alpine Valley #2 when I ate waaaaay too much liquid sunshine.

With each song in the first set, Phish was getting hotter and hotter. Gordo kicked some ass during Free. He was showing off his huge guns. I'm telling you... Gordo is juicing and taking whatever Melky was using. Melky led the league in hitting and Gordo led the Phish in jamming average. 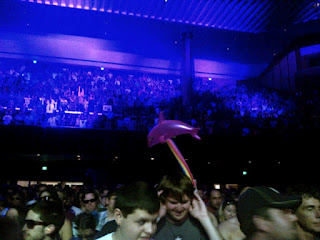 I love the guy holding his hands over his ears!
Mound is one of those rare tunes that you don't get to see very often, let alone a well-crafted version. I couldn't even tell you if they messed that up because I was so pumped to hear it that I was jumping up and down. That was the first time it happened all show... and wouldn't be the last time.

Walkaway was all heat. It matched the searing version we caught at Blossom last leg and even Joe Fucking Walsh would be proud. NICU featured the emergence of "Leon" which Trey dubbed Page on this instance. Leon ripped off a delicious solo before things really got cooking with Back on the Train. It was one of the standouts from the solid first set. Fog-funk was the theme the last few nights... and that soupy thickness spilled into Sunday. Fishman gets a gold star for holding down the funk backbeats. For the second half of the jam, Phish surfed atop a surging funk-wave that was three stories high. The kid behind me was on some killer shrooms because he was bugging out at CK5's "super trippy lights" during Back on the Train.

Jibboo was both mellow and intense. Not one single rough edge. Super smooth, like skipping a rock across a pond. Trey definitely snuck as many notes as he could into a couple segments, but Page's fills were what made Jibboo work.

Last summer featured the emergence of Roggae as an unexpected, yet tasty jam vehicle. That version last summer at the Gorge still gives me chills. Justin Ward called it the "best Roggae ever" and he's spot on. This rendition of Roggae was smooth like cocoa butter... or "buttah" as my friends from Rhode Island would say.

Bowie was all fire, but it probably had the most flubbs out of the first set. Fish came in waaaaaay too early and Trey missed a change. If they were in James Brown's band, the Godfather himself would've fined them on the spot. JB used to fine his band $5 for every missed change. Look up some JB videos on YouTube and see if you can find him pointing at one of his bandmates then flashing five fingers to indicate that he fucked up a change and owed JB $5 for their faux pas.

Anyway, despite the choppy start, Bowie caught fire and teetered on the edge of "evil jams" territory before it ended the first set.

Crosseyed and Painless has been the band's go-to second set opener in 3.0. Some of my favorite shows in the last few years were anchored around the Talking Heads cover. This particular version was just a launching pad for 45-minutes of explosive and exploratory jamming. It included intricate layers of funky elements (led by Page's shredding on the clav) not to mention Gordo's power-lifting bass. Plenty of No Quarter and The Wheel teases.

When Trey listens... the jams are fucking awesome. Big Red sat back and allowed the jams to develop instead of being impatient and the ADD-addled Trey we saw on Saturday night. Whenever Trey lets things flow organically, magical moments occur.

Same thing could be said about the dynamics in the Light jam. The boys did an excellent job at shifting gears within jams. At one point it felt like we were swimming underwater. I dug the stripped down jamming toward the end of Light before it reached a powerful orgasmic crescendo and I was jumping up and down before they seg'd into an explosive version of Sneaking Sally from the Alley. Volcanic Sally-funk. And then to top it off... Sally slipped back into Crosseyed to cap off that 45-minute beast.

Theme from the Bottom was well placed. Started out mellow and gradually ascended to a tasty peak. My buddy Javier had a theory that Phish played Rocky Top when they all thought they were playing a kick-ass show. So I was kinda surprised and happy to hear it pop up in the middle of the set, because it meant the band was having fun.

Man, Gordo was slapping the shit out of his bass during Boogie On. I was worried that if he kept smacking it around, then he'd get arrested by SFPD for domestic battery. Joking aside, I thought Gordo was going to punch Trey in the nuts after he ripcorded the Boogie On funk-a-thon -- after just five minutes -- in favor of a self-indulgent Meatstick. Thankfully, Trey didn't go all gimmicky on us and grab Phishy chicks from the crowd and pull them up on stage to grind the Meatstick dance with him.

If I had one complaint about the second set... it was the shortened Boogie On. They really could have delved into another five or seven minutes of fog-funk... but instead we got the only ADD-Trey moment of the night.

Sometimes Bug bugs me... but it was a tender version and they needed to give Fishman a breather. He deserved it after laying down some serious funk all night.

Judging on the time... it was getting late so I didn't expect the boys to sneak YEM by us. It was the perfect cherry on top of the three-night sundae. The crowd hung on every single note.

Everyone expected Tweezer Reprise after it got skipped on Friday night in favor of First Tube. But I had no idea what we'd get before it... I was thinking some sort of cover from Page like Day in the Life or Oh Sweet Nuthing. Of course... how could I forget Ride Captain Ride! It had the lyric about San Francisco that riled the crowd up. Plus Page/Leo/Leon always slays cover songs. Delicious set-up for Tweeprise... which blew the roof off the joint.

When the house lights went up, I was drenched in sweat and couldn't stop vibrating. Phish tapped into the vortex and they sucked us all in for a while. Shiiiit. Too bad they don't do that every night, right?

Sometimes I wonder if I'm too hard on Phish. Sure, I'm grateful to see any Phish at all but sometimes they'll play an inconsistent show when we all know they can smoke the shit out of any venue -- like Bill Graham for instance. A sizzling show like Sunday night in San Francisco proves to me that they can still bring the heat, push jams out to the farthest edges of the universe, and put a wicked smile on the melted faces of every jaded vet in the room. But therein lies the conundrum. Why don't they do this every night? Or at the least, why do they lack consistency?

Regardless, after almost thirty years, Phish can create magic out of thin air at any given moment. That's why we chase them all over the country. You never know what you're gonna miss.

The three night run in San Francisco is complete. Four California shows in the bag. The tour rages on and the circus moves on to Kansas City on Wednesday then Pelham, Alabama on Friday. I'm skipping those shows but will jump back on tour next weekend for Atlanta and Charlotte. See y'all then.

See you in Atlanta, Doc. I can't fucking wait.

Pauly You are the man! I couldn't have said it better myself. For me, last night made the flight all worth it. Best thing I've heard since Blossom. I told me non-Phish head friend that he would never see Phish play any better. Sorry I missed you. Did you by chance have a button down shirt on that said Wookie?

Pauly,
Light from about the 14:00 minute mark until Trey's explosion. You wait your whole life just hoping to hear something as absolutely visceral as that maniacal jam he went off on. Probably the best 20 seconds of music I have heard since the SOAM jam in cincy '09

Phans, be extra careful in Pelham. Can't believe Phish would subject their phans to the nazi-syle police force that will be waiting with baited breath to fill their local coffers with money from oall the fines and arrests. Good luck, and be safe.