Editor's Note: Our good friend Fink offered to write SPAC reviews for us. I thought he was going to write a final recap when he got back to San Diego, but at 4am he sent me this review. Enjoy!! Cheers, Pauly 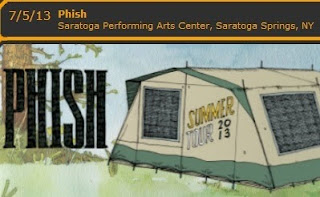 Phink checking in. 3:30 AM (its OK -- only 12:30 in whale's vagina)... currently sitting in the lobby of the Saratoga Hilton banging out this recap.

Pauly asked me to write about this run as he's actually missing some shows and saving up for Fall Tour or some nonsense. Its not often that I am at a Phish that Pauly isn’t at (dude as seen over 70% of 3.0) so it is an honor and a privilege to step in for him. Unfortunately for y’all this is Manny Mendoza pinch-hitting for Ken Griffey, Jr. so bear with me.

Before we get started a quick note about my credentials… triple digit shows, 17 shows this summer, 1993 Roxy first show, multiple Halloweens, multiple festivals including Cypress and like most of us listen to Phish religiously. Not only do I listen to Phish religiously, Phish is actually my religion. I am Jewish (why do the members of the tribe like Phish so much?) by birth but am agnostic when it comes to religion, yet I am very proud of my Jewish heritage/culture. But Phish is my religion. It is where I go to see my community, tithe in the form of travel expenses, downloads, tickets, merchandise, etc., bond with old and new friends, worship at the alter of the phab four, hang out with the phamily that I choose, etc. My pops, easily the coolest guy I know, asked me if I went for the music or the experience. I told him it was some of both. The music is untouchable -- they are hands down the greatest band ever; but the experience is as important as the music.

Another quick note: When Phish is on tour and we are on the road, I love following the Phish tweeters and reading the recaps but sometimes my opinion is shaped by what everyone else has written, tweeted, etc. (e.g. "I will let you know what I think about the show after I check the internet!"). To do this recap, I have specifically not looked at my Twitter feed and won't read other recaps until after I submit my homework to Pauly in order to attempt to give you an unbiased opinion of my experience. I also have not re-listened to the show yet.

(My friend) Trey, Megan, Wookie, Lauren and I drove up from Boston the day of the show, met up with Carmine (you can't miss Carmine – he wears a moomoo to every show and was wearing a pink moomoo and a cape tonight) and Spider. I got ready and picked out a special shirt for the show: my South African soccer jersey to (1) pay homage to (my friend) Trey and Megan who moved back from Cape Town last year, (2) a nod to Grant who is a soccer fan, coach, lover of Phish and Panic and who partook in the SPAC festivities last year but was unable to do so this year, (3) proclaim my love for the beautiful game, and (4) look Phish cool. Phish fashion is a funny thing – people want to dress for Phish in a manner that makes it look like they don’t care... but they do. Some pick out their specific shirts to wear (e.g. Pauly's Ocelot shirt), some are peacocking in outlandish outfits, some are in costumes, the girls pick out their funky accessories (they may be funky but they are accessories) and dress in the bohemian style that I love and look hippy sexy. I have my outfits picked out for each show…but I don’t want it to look like I did too much.

We hustled over to the lot around 5:00. It was a scorcher in Saratoga. Being from Sandy Eggo (aka San Diego) where anything outside an eight degree range (68-76 degrees) is too hot or too cold (and has, according to my friends, made me soft), this weather is especially brutal. We took care of business in the lot (will call, getting tickets to peeps, getting show provisions, rounding up and saying hello to friends, spending money on all of the Phishy stuff in shakedown -- my favorite being the Heisenberg Breaking Bad Its Ice sticker Spider gave me) and headed into the show. However, they would not let us in. Security indicated over a bullhorn that they weren’t going to let anyone in until the storm passed. We huddled under a guest services tent and waited out the storm. The natives were getting restless (multiple "Let us in!" types of chants) and finally we were able to go through security. We headed to our seats. Walking in, my friend Trey commented that SPAC was like a deconstructed/open air Hampton, a neat observation.

We had traded different sets of pavilion tickets and were able to all sit together Section 7, Rage Side about 20 rows up. Nice set-up. FYI, SPAC lawn is as bad as they say. It's sloped, tonight it was wet and muddy and exposed to the elements, you can barely see the venue and the biggest crime of all – the sound is, as Charles Barkley would say, "Turr-a-bull."

Phish came on later than expected due to the rain delay. Standard Moma, Roses had no jam, Birds was tight, enjoyed it. I really liked the new tune ("Yarmouth Road") – it was a cool bluegrass/reggae vibe and to me sounded like it definitely came mostly from the mind of the Cactus. I love Gin, thought this was GREAT, and I caught a glowstick mid-air during Gin causing 4 or 5 people around me to give me some dap. I also, as typical during Gin, wondered "where is the Joker?" but then smiled knowing that I will see him for part of the west coast run with Pauly. Finally a most pleasurable cities -> bowies to close it out – live it seemed like a beautiful transition by Fish between the songs.

I wasn’t at Bangor however listening to the soundboard vs. the show tonight seems like a no brainer to me. Obviously I have in-person bias, however as somebody starting his tour at SPAC, it was a perfect set-up. They played songs I didn’t mind missing but clearly were well practiced and super tight.

Set break was fun, just hung out in the seat catching up with old and new friends. Talked to one young guy (lots of young phans in the crowd, very good to see) who just got his degree in music business. Having grown up in the music business and having a sister who has owned her own ass kicking and taking names company in the music business for a decade (so proud of the Jedi), it was fun to talk to him. The most important piece of advice I gave him was to read Bob Lefsetz. Set break seemed shorter than normal – likely due to the rain delay.

Another song I had never heard! I have no idea the last time I went to a Phish show and didn’t recognize two songs. Love love love seeing the boys busing out new stuff. They are overdue. They put "Energy" in a big spot (second set opener) but it was young so the training wheels stayed on. I saw some Brooklyn hipster singing the song and asked him about the song and he said it was a pop cover. Light was the start of beautiful, patient, mellow, blissful, soulful, loving Phish. They had a mellow vibe tonight but played so perfectly. Light (don’t like the song, but love the jams that come out of it) was perfectly paired with Mango (first time?). The all-star part of the show, and one I will listen to ad nauseam, was the 46 days into Steam (a perfect song as it was STEAMING in the pavilion all night) into Drowned (which I had called as an opener as we were huddled under the guest services tent during the severe downpour – it was seriously coming down). Such delicate and polished playing for that stretch. Best. Band. Ever. And then Slave - knowing I was writing this review for Pauly (such a talented writer, dedicated blogger, incredible Phan, good friend)… to get his favorite tune was awesome. And they nailed it. To (my friend) Trey's credit, he called the Slave and during the encore break predicted Character Zero (which in all honesty I poo-poo’d and said it wasn’t that type of vibe). Being seasoned veterans and knowing the shit show that it can be getting back to Toga proper, we huddled during the encore break and discussed leaving midway through the encore dependent upon the song selection. Phish chose Zero and we bailed mid-way through the song hearing the last notes as we walked out of the south gate and hustled to a cab.

We got back to Saratoga, the crew splintered (some for food, some for bed) and I ended up hitting downtown with Spider. We met some cute girls with laminates, some serious phish babes including a girl that actually recognized me from Long Beach (in the midst of the 10 day wookie bachelor party), had some very cool phish community exchanges (everyone giddy, talking about the show, what shows you are hitting on this tour, etc.) and tried to convince some locals they absolutely positively had to go see Phish this weekend. The time is now.

Guest post by Fink... our good pal from San Diego.

Great job Fink. I was texting Pauly exactly what you wrote. Kill Devil Falls opener glad they got that out of the way, MOMA wasnt as funkified as I like and sloppy. They got rolling with Birds but didnt let lose. From Bowie on it was all Smoke though. I am a local so knowing what a clusterfuck getting out of SPAC itself and getting out of the lots is I made my way out during Character Zero. I gave the boys a B. You get an A. Hope I run into you. Not sure what I am wearing. Cargo shorts for sure other then that I really havent given it much thought!! Really!!! And your right the sound on the lawn sucks donkey balls (Ive been spoiled when the good doctor is in town to shed seats). The energy is way different on the lawn.

Get professional trading signals sent to your mobile phone every day.

Start following our signals NOW and make up to 270% per day.