Greetings from Australia. I had to work for two weeks in Melbourne but then I flew up to the Gold Coast to check out Big Day Out, which is the Aussie version of Cochella, Bonnaroo, and Vegoose all rolled into one.

We had an amazing time at Big Day Out. Shecky hooked us up with free tickets and a backstage pass. We got to watch several of the bands... on stage. Unreal. Big Day Out was huge, like almost 100K people partying their ass off. We caught Chemical Romance, John Butler Trio, Muse, Jet, and the headliner... Tool. The VIolent Femmes, the Streets, and Crystal Method were also on the bill.

Here are some pics:

The first thing we saw when we walked in... 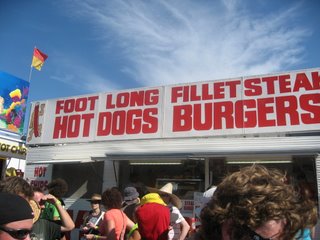 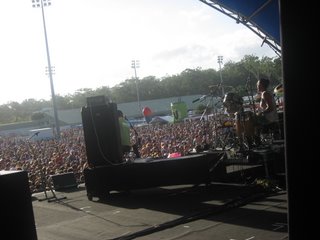 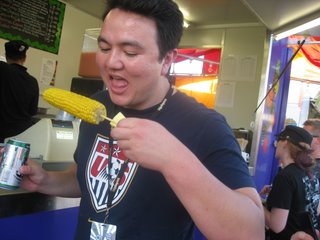 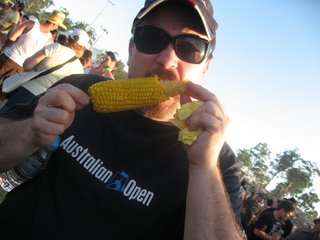 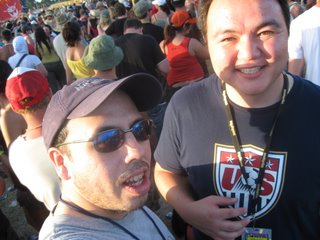 Hanging with the crowd during the Killers set 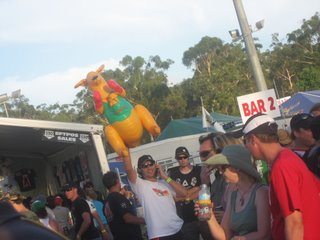 "Dude? You can't find me? I'm waving the kangaroo?" 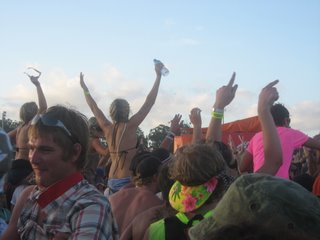 Too bad they didn't flash us... 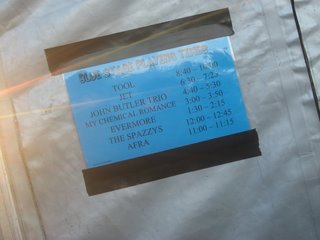 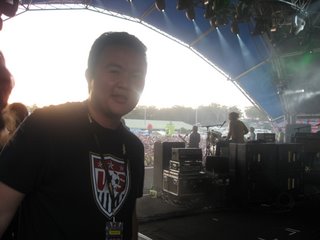 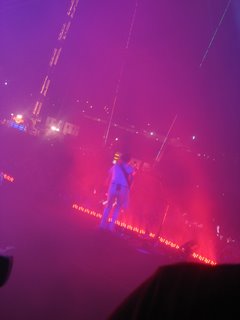 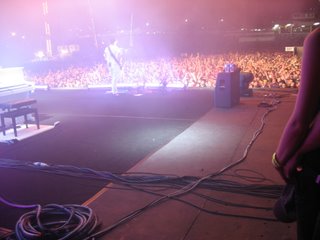 Email ThisBlogThis!Share to TwitterShare to FacebookShare to Pinterest
Labels: Big Day Out

My Morning Jacket: New Year's at the Fillmore

There's nothing better in life than getting to see one of your favorite bands play a New Year's Eve show and ringing in the new year with a bunch of happy souls.

I had one of the best New Year's Eves since 1999. Sure there were two others NYE moments that stand out such as 2002 (the infamous Phish reunion at Madison Square Garden in NYC) and in 2003 (Phish's four show run in Miami which was the beginning of the end of Phish and the beginning of the end of my morbid depression), but those nights didn't compare to 2006 in San Francisco.

Over the last ten or so years, I've made the decision to see a band play on New Year's Eve. From experience, I've learned that New Year's Eve tends to be not as cool as expected and that it's considered amateur night by seasoned professional partiers like AlCantHang. So to combat that, I have chosen concerts to go to. I love the bands so it's almost like any other show, but there's no let down about the romanticized notions of New Year's Eve. So instead of standing in the corner of a lame party, I'm dancing my ass off with some of my favorite bands.

I had an amazing year with plenty of ups and downs. Live music made a tremendous return to my life and I got to see both Vegoose and Bonnaroo along with several Panic and Galactic shows and I fell in love with a couple of new bands such as My Morning Jacket and Tea Leaf Green. MMJ's Midnight show at Bonnaroo pretty much body slammed me. I had not been blown away by a band like that since I saw Galactic for the first time.

I had the opportunity to see Panic, Trey, Particle, and Galactic on NYE. And I blew off all of those to spend it in San Francisco with Nicky seeing My Morning Jacket. She thought it was the show of the year. For me, it was pretty close. Easily Top 5, maybe even Top 3. But I do know this... it will go down as one of the best MMJ shows I'll ever see. The yardstick has been molded. MMJ NYE at the Fillmore!

We woke up early on Sunday to drive from Hollywierd to San Francisco. I wanted to stay and watch the Jets beat up on the Raiders en route to a playoff spot. But we had to leave after the first quarter. Thank God for the game on the radio, which we listened to on the drive up on I-5.

We had a rough patch of traffic and arrived in San Francisco 30 minutes later than expected. I found a good deal on a room at the Cartwright Hotel, a block off of Union Square. It was a swanky place in an amazing location.

The suit at the desk made me sign a waiver saying that I will not be throwing a New Year's Eve party in my room. The room was spacious and we had free wifi. The only thing that sucked was that it cost $35 to valet the car. With no parking in that part of town, we had no choice. But it was New Year's Eve and I wanted to go all out.

Showcase bought us a bottle of Moet and we tossed the bottle on ice as we wandered around Union Square area. We ate dinner and Nicky did a little shopping for a warmer coat. We were going to have to walk the 15 blocks from our hotel to the Fillmore because there was no way I was going to drive on NYE and we knew that there would be no cabs available. We headed back to the room to partake in the champagne and started the pre-party. The walk to the Fillmore took a little longer than expected. But we arrived just in time as the opening band took the stage.

Wax fang is also from Louisville, Kentucky. They are a power trio and have an interesting sound to them. All of them are long haired and they were dressed up like cheerleaders which was both humorous and disturbing in the same breath. On their myspace page, they mention that they sound like "sunset strip club soda pop art gallery"... um whatever that means. They also like calling themselves the "prefect dive bar band." At any rate, they were entertaining as the opening act.

The Fillmore is a historic venue to see music. For over four decades, some of my favorite musicians have taken the stage to showcase their sound. This instance, the venue was draped in silk cloth paintings to make it look like we were standing outdoors. It fit the theme for the night.

Set 1: "Two Tone T-Bone" intro > One Big Holiday, What A Wonderful Man, The Way That He Sings, Gideon, Off the Record, It Beats 4 U, Lowdown, Lay Low, The Dark, Golden, Dondante, Run Thru, They Ran

The band started the show at 10:30pm with a piece of performance theatre as they lit a campfire onstage behind a see-through veil. That went on for about five minutes as it began to snow inside! Phish had a snow machine for the Reunion at MSG, but the MMJ snow was on a smaller scale. That got everyone in the room excited. The crowd was an interesting mix of fans... hippies and hipsters unite! Aside from the super drunk girl behind us who kept banging into us from time to time, the crowd was friendly and into the show.

One Big Holiday is their standard opener. They start the first few chords before he silk curtain drops from the stage to expose the band as the crowd went apeshit. The highlights in the first set included One Big Holiday, What A Wonderful Man, Gideon, Lay Lown, Dondante, and They Ran. MMJ played a first set that was about 1:20 in length before they took a five minute break.

At 11:55pm, MMJ took the stage again and Jim James thanked everyone possible for an amazing year and an amazing evening. The fact that the management at the Fillmore asked them to do a three show run to close the year including an epic NYE show is a testament to their musical talents. My Morning Jacket is the real thing and I was fortunate that I got to ring in the new year with the MMJ extended family.

The did the countdown and hundreds of white balloons fell from the ceiling in one of those magical NYE moments. Nicky gave me a wet and sloppy kiss and balloons kept falling as the band busted into a series of four random cover songs. The start of 2007 began with Celebration by Kool and the Gang. The entire floor of the Fillmore began bouncing from everyone dancing hard as Jim James belted out, "Celebrate good times, come on!"

Then they got weird and freaky and did a mellow version of Lionel Richie's (yeah that's Nicole's dad) classic All Night Long. Next up was a hilarious version of Careless Whisper. If you don't know what Jim James looks like, think of a guy who hasn't shaved or cut his hair since 2000. Then think of that guy wearing an oversized styrofoam hat and waving around a cap gun while crooning the audience with a George Michael cover. Classic.

They finished up their four cover songs in a row with a Prince tune before they went back to their material. Bear and Wordless Chords were the highlights of the second set along with the last three song stretch of AC/DC's Highway to Hell and their epic songs Anytime, then Mahgeetah.

I was pretty banged up during the show. Although I had one point in Amsterdam when I was out of my mind, NYE was the most wasted in 2006 that I had been since the Trey/Phil show at Vegoose and the Radiohead show set at Bonnaroo. If you toss in the Playboy mansion, those were my Top 5 mind altering moments of 2006.

The show ended and we went into the hallway to pick up our stuff at the coat check. Nicky head into the bathroom as I stood in the hallway admiring all the photographs of previous performers. One wall had timeless pics of The Grateful Dead, Jefferson Airplane, and Janis Joplin. Another wall featured Beck and Neil Young. That's when I heard someone say, "Hey are you Pauly?"

It was 1:44am and I met Aaron from Portland. He said he saw me and the gang at Bonnaroo (you couldn't miss us with the celebrity heads) but didn't get a chance to say something. He had been reading the blogs for a while and finally got to meet me. It was pretty cool that we both decided to end the year (and start the new one) with My Morning Jacket.

Nicky and I walked down Geary Blvd towards Union Square. By then it was 2am and the bars were emptying which meant that thousands of drunken fiends were unleashed into the streets of San Francisco. Talk about a freakfest as hippies, street people, trannies, drunken yuppies, and hipsters flooded the streets. Two chicks in front of the Fillmore almost got into a fist fight after they argued over a cab.

On Geary, several people were passed out on the sidewalk while others were leaning up against parking meters as their soused bodies slugged over. One guy was carrying the limp body of his drunken girlfriend n his back as they passed us in the street. Another young girl was puking in between cars. And at the 24 Hour Jack in the Box, there was a line around the corner as drunks wearing tuxes and black cocktail dresses were waiting to buy a Jumbo Jack.

The new year began with me wandering the streets of San Francisco, shitfaced to the tits as I butchered the words to Highway to Hell trying to safely navigate Nicky and I back to our hotel, where we'd spend the rest of the nite polishing off that bottle of Moet.

At 7:50am PCT, I got a text message from AlCantHang that read, "still haven't slept in the new year." Yikes! I thought I tied one on, but that's why AlCantHang is a professional. Kids, you should not try that at home.