Thao with The Get Down Stay Down new album coming soon 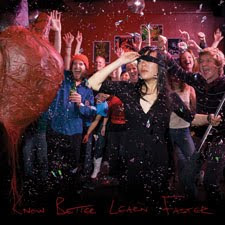 Thao Nguyen, Coventry's favorite little folktress, is releasing a new album on Kill Rockstars October 13th with her band Thao with the Get Down Stay Down entitled "Know Better Learn Faster." They've released the single of the same name, but otherwise have done a great job at preventing any leaks of the full release. Fair enough. You can however, preorder the album ($13 + S/H) and immediately download the mp3s. I'm only halfway through the album, but so far it's more of the same sincere, bubbly rhythmic songs like Bee Stings and All.

download the single here: link
Posted by BTreotch at 4:20 PM

Email ThisBlogThis!Share to TwitterShare to FacebookShare to Pinterest
Labels: Thao Nguyen, Thao with the Get Down Stay Down