These four articles from Vigilant Citizen about Lady Gaga blew my mind...

I'm not a fan of Lady Gaga. I honestly didn't know anything about her or her music aside from the fact that most of my friends often joked and wondered if she is a drag queen or really a woman.

I wasn't even familiar with her hit song Poker Face, even though I worked as a poker reporter and many of my non-poker friends often referenced it. I didn't even hear the entire song from start to finish until I picked up a rental car at Ft. Lauderdale airport during Phish's NYE run in Miami in 2009. I couldn't figure out how to change the radio station in the rental car so I had to listen to a show reviewing the year's best songs -- including Lady Gaga's Poker Face. To even make things weirder on that trip, Lady Gaga's tour bus was parked down the street from our hotel in downtown Miami. Wildo and the Joker quickly started rumors that she was going to sit in with Phish during the NYE run.

While doing research for this post, I watched a couple of Lady Gaga videos and it's very obvious that there's tons of subtle and not-so-subtle imagery and symbolism that the powers to be embedded in her videos either on purpose or by sheer coincidence. It's hard to dispute the evidence that she has become a puppet for someone. But specific imagery points toward the Illuminati -- a secret society that many conspiracy theorists believe are the ones calling the shots in shadow governments all over the globe.

Music used to be a tool of the revolution. Lyrics were a weapon that could reach the masses. Protests songs have been a part of American music for almost a hundred years. Bob Dylan was influenced by Woody Guthrie, who during his era, was renown for protest songs like This Land Is Your Land. Dylan became the master of stuffing a significant amount of political rhetoric into his folk songs. His mumbled words, a guitar, and harmonica helped ignite a revolution.

Somewhere along the way, the powers to be realized the immense social impact of popular music, so they used the airwaves to manipulate the masses, especially the impressionable youth. They hijacked videos on MTV and BET to help sedate the masses by turning them into mindless zombie consumers, instead of revolutionary anarchists hell bent on seizing power from the elites. In the ultimate display of arrogance, they even secretly leaked out their evil agenda using symbols that appeared in videos from some of the most popular artists of the day dating back to Madonna and including her post-modern incarnation of Lady Gaga. Also rumored to be manipulated by the Illuminati are Britney Spears, Kanye West, Justin Beiber, and even a few of of your favorite hip hop artists.

She fascinated the world and sold millions of records in a day when most people acquired music for free on the internet. She cut right to the front of the line of wanna-be celebs seeking their "15 minutes of fame" and her moniker became a piece of every day vernacular in mainstream America. She performed to loyal minions sold out concerts and was so captivating that even Trey took his daughters to a Lady Gaga concert. She inspired stylists and clothing designers. She became an icon for the gay community and every queer from the Castro to the West Village belted out her lyrics. Her weirdness even attracted fetishists and satanists from all over the planet.

The young woman who became Lady GaGa (born Stefani Joanne Angelina Germanotta) was a struggling musician and artist in NYC who literally sold her soul to become a puppet for the Illuminati. "Stefani" used to play her original music to drunken hipsters on the Lower East Side, but her fledgling career seemed doomed to fail before her metamorphosis into Lady Gaga. She has since become one of the most famous and recognizable celebrities in the world. She's a fixture on MTV and her songs are blasted in clubs all over the world. Did she truly sell her soul to the devil? Or at least... to devil worshipers? 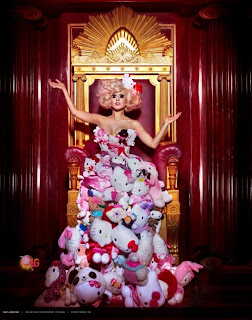 Lady Gaga makes you turn your head. She looks outlandish, like the madame of a futuristic post-apocalyptic whorehouse, but all of her over-the-top costumes and intricate make-up might distract you from discovering the hidden symbolism in her outfits and in the background of her bizarre videos.

Either Lady Gaga has been "borrowing" imagery from secret societies, or she's become a shill for the Illuminati. It seems pretty obvious to me. The hidden eye theme (Eye of Horus or the symbol that is on the back of the $1 bill) is something that is strewn all over her videos and different photo shoots in magazines. The references to Baphomet are startling. Baphomet is a goat-headed androgynous creature with breasts that was the product of magical sex between opposite copulatives.

The information, pictures, and videos in those articles point toward a horrifying truth that Lady Gaga is being used as a tool to manipulate the masses using mind control techniques and sacred imagery in her videos. But who does she work for? Is she a puppet for the Illuminati, Satan worshipers, or some other evil mind control project funded by the CIA?

Next time you watch a Lady Gaga video, pay close attention because you never know what weirdness might pop up.
Posted by Pauly at 4:20 PM

but wait - it's not just Gaga that's a tool of the Illuminati!

methinks someone is reading a bit too much into things...

If I disagree, does that mean the mind control worked?