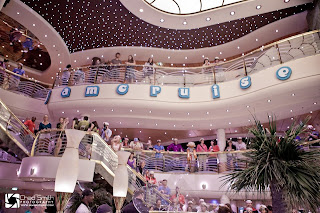 Its difficult to write about Jam Cruise. There is so much that happens, and many times “you just have to be there” applies.

I think this quote is so true when talking about Jam Cruise. Nearly everything about Jam Cruise brings out an emotion in me, and these are the things I intend to tell you about.A couple of nights ago I washed my notes in the laundry by accident. Everything I am writing is from my memory of the way I felt, and I will never forget these feelings.

I headed down to Ft Lauderdale on Saturday, Jan 7, two days before we set sail to hit the Umphreys McGee pre-shows. The Saturday UM show was well played but a miserable experience for most people in attendance, as Revolution grossly oversold the venue and it was a most uncomfortable show. The Sunday show was a different story, I got a great place and thoroughly enjoyed the show rocking out with a room full of Jam Cruisers.

Before the Sunday show we headed to a Mexican food restaurant for some dinner and to watch the Pittsburgh vs Denver game. To my surprise we found most of Umphrey’s McGee and crew/entourage sitting at a table cheering on the Steelers. Ryan Stasik and I had met briefly a few times before, and he recognized me and sneered at my buddy Adam’s Denver Broncos shirt as we walked in.

Stasik had his terrible towel in hand and stood up to cheer and wave the towel for each Steelers offensive or defensive play that went just the slightest their way. I will never forget the look on Stasik’s face as he hung his head in defeat after the winning Denver run in overtime.

Monday afternoon we headed to get on the boat without incident. Everything on Jam Cruise is a party - even the line to get on. I saw some old friends and made some new ones.

I made disco helmets to give to Simon from The New Mastersounds, and Ryan Stasik from Umphreys McGee. I had met both of them at Red Rocks July 3 and I wanted to make helmets for them because I thought it would be awesome if they actually wore them. I think both of them kind of forgot about it and never expected a fan to actually follow through. Stasik requested a gold helmet, in tribute to Pittsburgh.

I was able to run into both Stasik and Simon on the boat without looking for them and deliver their gifts with short photo sessions. I was excited and my blood was pumping. As the saying goes, it is better to give than to receive, and I feel like I was finally able to give something back to musicians who had given me so much joy. It felt good times 1,000.

The afternoon flew by and before I knew it, I was putting on a ridiculous shiny costume. The official theme for the boat was Nautical, but my crew had made a push for an unofficial theme for the night – German Sparkle Party. By 8 o’clock we had 30 people packed in the Touch of Class hallway with more sparkles and glitter than any straight man could handle. All over the boat the German Sparkle Party mixed in the the Nautical theme and the rage was turned up to 11. My cocktail of all things starting with the letter “A” was getting a little more than I would have liked – I retreated to the Pool Deck for some fresh air for a while. 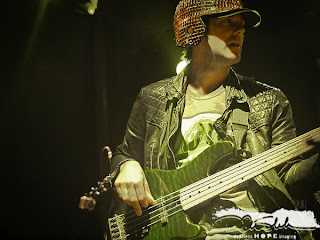 We say that jam cruise is a marathon, not a sprint. On night 1 of jam cruise I came out of the gates hot – sprinting right away. I enjoyed sets by Robert Walter in the Atrium and Bruce Hornsby on the Pool Deck – but it wasn’t until Umphreys played on the Pool Deck at 12:30am that I was able to get the chemical level in my blood to the correct level.

UM played a fantastic two set show, with their originals rocking flawlessly and two standout covers will forever be remembered. During Live and Let Die, Stasik donned the Gold disco helmet for the first time, and I must say it was spectacular. Most of the time I am wearing the helmet and I don’t get to enjoy looking at it – I finally got to see a disco helmet in its perfect glory – on center stage and lit up professionally by Jefferson Waful. I enjoyed both sets rocking out on my disco guitar. I would joke that I was making a top score on guitar hero. There is no place to be a dork and silly like Jam Cruise.

The second Umphrey's cover of the night, Shine on You Crazy Diamond, was patiently executed and had all of us on the pool deck singing to the full moon directly overhead. Such a beautiful, perfect moment. 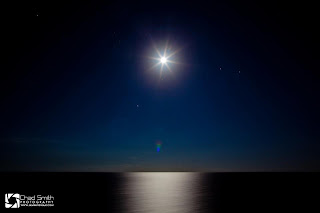 Night 1 ended for me sometime before sun rise. As I stumbled back to my room I could not believe it was only the first day.

Badass. The helmet thing is great.