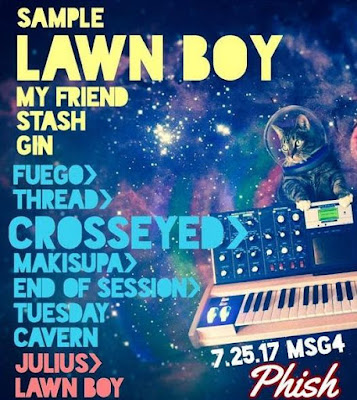 I was walking out of the Garden after Sunday's show when Phish announced Tuesday's donut: JAM FILLED. Jam? JAM?!?!? The official description is: "mini honey dipped donuts with raspberry jam in center". How would the jam-centric night turn out? Kick out the jams muthafuckers? Old-school Fall 97 sets with 3-4 tunes per set? A solo-monster jam per set (e.g. Woostah Jim, Mud Island Tweezer, Tahoe Tweezer, PVD Bowie)? How about Trey wrapping a flannel shirt around his waist and climbing CK5's new light rig so he could stage dive into the dudes in the front row while singing?

The entire MSG run will be webcast at LivePhish. Check Terrapin Radio for any audio feeds.

For Baker's Dozen coverage, follow @CoventryMusic on Twitter for "weather permitting" updates. And we're also on IG at @CoventryMusic. 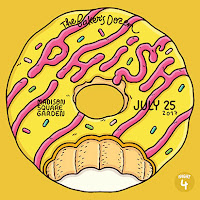 I never fluff shows, but Night 4 was among sickest shows I caught in 3.0 (and I saw over 200+ since 2009, derp). It's up there with Fuck Your Face and Vegas Halloween... Lawn Boy and Crosseyed and Painless were the monster-double-dong-jams of the night... Had not seen a show stuffed with multi-dimensional jamming since 2004... Guy next to me was only one in building unaware of the jam donut theme. He went berserk in the first set screaming, "They're playing 10:30 jams at 8 o'clock!"... I got his gist. I was second-set schwilly before 8:30 and wasn't the only one. Phish announced the jam show on Sunday Midnight, so everyone pretty much dug in whatever psychedelics they had stashed away, or decided to eat their weekend drugs on Tuesday. Or for the usual party peops, they simply doubled down for jam Tuesday... Entire section behind stage blocked out by a black curtain. Weekday shows didn't sell like the weekend ones, and we know how Phish liked to punish its phans who skipped shows (e.g. SLC 98, Boise 99)... Benjo and I had seats in the last row of Sec 102, or dead center... No donut-jam-themed covers, just Phish... Five-song first set. Like the blurry Oxy years, except Trey's sober chakras cultivated waaaay happier jams and nowhere near as dark and sinister... Page is the emotional center of Phish. When Page is on, then it's gonna be a sick show. When Page is overflowing with confidence (a.k.a Leo the Lion), he transforms into a beast. Peak confidence from empowered Page all night. Hope it sticks... Lawn Boy launched into the cosmos when Page whipped out his keytar after Gordo's solo... Midway thru LB jam, CK's new lights became sentient. Phish unlocked something/leveled up and lights became their own entity... During Fuego, the phalanx of lights talked to me, but I didn't get freaked out until they said, "We've always been talking...you haven't been listening!"... Thread = bette noire of the show. Only there to give Fish a breather before another astral journey with Crosseyed... Crosseyed mind-fuck-jam unlocked another level... Makisupa jammin' mon... Talk about deep cuts: End of Session... Trey said never miss a Tuesday show... Julius = 13th song of  N4, something Nic pointed out as soon as it end... Finishing Lawn Boy was the cherry on top of the jamilicious sundae... Dunno how they gonna top that one. Four down, nine to go.

Argo, once again you are the man thank you!!

Pauly are you out prowling the streets like a werewolf??

word up thanks again

oh what a night

Can you please re-up these droids ?

thanks! was missing that one