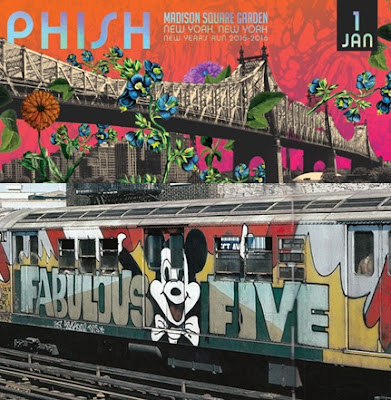 The first show the new year! Historically, these 1/1 shows are usually low key, mellow gigs because everyone involved is out of gas.

1/1 MSG show will be webcast over at LivePhish.

The Hangover Effect. Sports teams get pumped up for a big game...which they win, but then the next (lesser important) game is a total shitshow because they didn't practice/prepare as well as they did the previous opponent. Happens to Phish all the time. The Hangover Effect looms the day after a big show (e.g. November 1st or January 1st). The band feeds off our energy and vice versa. On the day after a big show, everyone is dragging ass and spent from going hard the previous night. As is...I had very low expectations and figured it was going to be a mellow show and potential snoozer.

Trey's balance is the key. He needs to simultaneously be the fearless leader, but a team player too. Sometimes he tries to hard keep everyone happy (e.g. Mike) but in doing so he defers too much instead of leading the band off the path to blaze some new trails. On the flipside, too much self-indulgent Trey creates disharmony among his teammates and we get a total wankfest. Yet, too little influence from Trey creates an aimlessness, directionless show because everyone lacks confidence. It's a tough balance and frankly a no-win situation. That's why these fuckers need to practice more. And I don't want them to practice more so they "nail" segments of classic songs or be able to pull off competent version of rare songs....I want them to practice more because it instills more trust and confidence in each other so they'll have they cojones to take bigger chances. More chances equals more diversity in the sets and wacky sets often lead to epic shows. Alas, you know the story... everyone was tired and the boys played it safe. 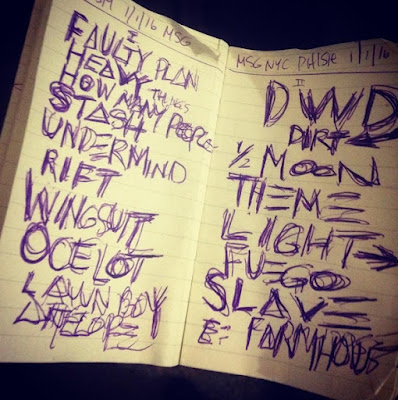 Band didn't real gel until the third song in. Faulty Plan seemed strained and they didn't get any oooh oohs out of Heavy Things. I've been on the fence with How Many People Are You? but I think they might of won me over this version. Stash had its peaks and valleys and got a little dark...albeit superficially dark, but not deviant enough for my morbid tastes. If you gonna pull out a Stash, you gotta go balls to the wall and spook the fuck out of the acid heads. Undermind jam out had a couple of teases from Stash and Faulty Plan, plus a couple others I couldn't recognize. Wingsuit is when change100 noticed the whiskey tango wookette (W.T.W) next to us...it was the first of several times she passed out during the show, once with a green glowstick wedged between her titties. WTW had some quotable gems...


WT: "I heard you like Panic? I got some whiskey. Want some? I never leave home without it!"

WT: "I'm from the South, so don't you libtards get freaked the fuck out if some racists shit spews outta my mouth."

At one point it started to smell like foul, rotten-egg farts and I wondered if WTW blasted herself a dookie? I love Ocelot probably because I know so many people fucking absolutely hate it. It was off the radar late last summer, but glad to hear it again. Page locked up post-show booty with another wet-deck inducing Lawn Boy. It was the "Leo the Meatpacker" version. Since Leo gets krunk'd to the tits while roaming the streets of NYC at 4am, he can pop into any club in the Meatpacking District and snatch up some high-end, Eastern Eurotrash model poontang. Leo the Meatpacker Master, or as the Russian models coo, "мясоконсервное дело!"

Seven-song second set was anchored by (somewhat predictable) DWD opener. Easy money if you were gambling on setlists. DWD barely touched upon the 15-minute mark, but didn't get too rowdy before they slid into a mellow Dirt. That Moon song felt out of place in the middle of the set, and a longer Theme would have been a more cohesive alternative to forcing Moon. A big Light usually pops up earlier in the set in the 2-hole or 3-hole. Seemed like the boys were struggling to find an universal direction in that jam before it fizzled out into Fuego. As per usual, Slave saved the set. Silky smooth. Even if you're seeing a below average show...getting to hear your favorite song (i.e. Slave) often wipes out the previous transgressions.

"We got Farmhouse'd!" said change100. "They're totally trolling us, right?"

It occurred to me that there were no covers through three shows...so they were due for a Loving Cup encore, or perhaps a shredding GTBT, or even a Boogie On, which had been popping up in encores. I woulda loved a Rock n Roll...Leo slays those covers. Alas, a fuck-you nod to Billy Joel and no covers. Alas, we got an original Phish song for an encore...and Farmhouse at that. Best part of Farmhouse? Whiskey Tango Wookette was passed out cold, yet still managed to sing along to Farmhouse. Impressed she actually knew all the words. I thanked her for not yakking on my shoes. Change100 remarked, "Instead of thanking her, you shoulda given her a Wook Ticket!"

Hangover Show dunzo. Three MSG shows complete. Only one more to go. I hate going into shows with lofty expectations, but 1/2 is gonna be the rager, right?

These aren't the droids you're looking for...http://we.tl/DIiSEJ0wnQ

Phaser for President!! He knows how to get shit done!!

Who are YOU trolling?

Thanks a bunch Phaser!!

Sometimes people don't believe me when I tell them about how much you can make taking paid surveys online...

So I took a video of myself actually getting paid $500 for taking paid surveys.