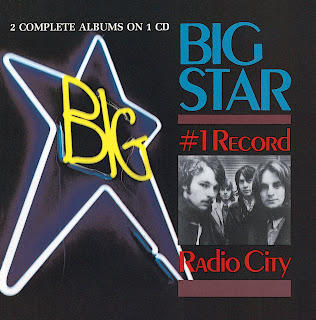 I read this week that 1970s power-pop band Big Star will be playing at South by Southwest, the mega-music-festival-cum-record-label-schmoozefest that takes place every March in my former adopted hometown of Austin, Texas. I left Austin twelve years ago. Despite the promises we made to each other when we first rolled into town that we’d stick together come hell or high water, SXSW decided to hang its hat in the capital city when I departed. Believe me when I say that it’s been a sticking point between us ever since.
Big Star is one of those bands that reminds me of a line I remember reading a long time ago about the Velvet Underground. Hardly anybody bought the Andy Warhol-produced Velvet Underground & Nico, the line goes, but everyone who did started a band.* Well, the boys from Memphis never hit the super big time back in the 1970s but the three records they released have influenced a wide range of artists ever since. If you need any evidence to back that up just consider the range of artists who have covered the band’s songs in the intervening decades: Whiskeytown, Cheap Trick, The Afghan Whigs, Okkervil River, Garbage, The Bangles, Wilco and Elliott Smith** have all had a go at Alex Chilton et al.’s discography at one point or another.
I could go on all day about Big Star but there’s not much point because a) countless others have done it before me, and b) they’ve done it better than I could. Instead I’ll tell you about Sixteen Deluxe, a band from Austin, Texas, who remind me of Big Star for a number of reasons.
Reason #1: The most obvious - Sixteen Deluxe once recorded a gorgeous, spaced-out cover of “Kangaroo,” a track off Big Star’s Third/Sister Lovers, that closed out their 1995 debut album, Backfeedmagnetbabe, released on Trance Syndicate Records.
Reason #2: Much like Big Star, Sixteen Deluxe is reuniting and playing at this year’s SXSW.
Reason #3: Least importantly, but perhaps significant in some sort of cosmic sense that I can’t grasp, I actually heard the news about Big Star playing SXSW from Jeff Copas, Sixteen Deluxe’s bassist.
Reason #4: This one’s the key - just like Big Star, Sixteen Deluxe could’ve been huge but never were.

When I first remember seeing the band play live at a benefit for local college radio station KVRX in September of 1994 ($3 at the door!), Sixteen Deluxe consisted of Chris “Frenchie” Smith (guitar/vox), Carrie Clark (guitar/vox), the aformentioned Mr. Copas (bass) and K.C. Rhodes (drums). The first three were the core, while Rhodes filled the role previously held by Bryan Bowden and Lyman Hardy of Austin psychedelic outfit Ed Hall. Eventually Steven T. Hall would take over the drums and stay until just before the band broke up, but the rest of the lineup was the same for the duration of Sixteen Deluxe’s existence.
What characterized them? First, they were loud. Really loud. Seriously. Typical 16D apocrypha from that era involves people walking out of Emo’s with their ears bleeding. I never had that happen myself in the dozens of times I saw them play live; there may have been a little bit of pedestrian, next-day muffling and perhaps some permanent hearing damage, but never any blood. I can, however, testify that their live sets were tailor-made for the psychedelic scene in Austin. All sorts of colored and strobing lights, smoke machines and the occasional avant-garde film loop projected in the background background combined with the aforementioned volume to make a great place to wait for a flying saucer to pick you up. 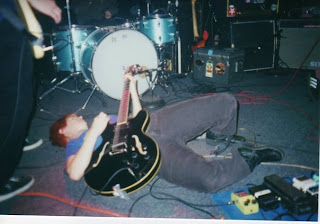 And then there was the gear - oh, the gear! We’re talking serious psychedelic analog guitar heaven. Fuzzy fuzz, sweet delays, phasers and tremolos and wahs and even the odd E-bow thrown in to liven things up. There were at least ten times as many effects pedals on the stage as there were living, breathing members of the band - and in a sense all those effects were the band’s Fifth Man, lending that necessary component of the sound that made the music what it was. From the woozy intro of “Babyheadrush” to the manic menace of “Mexico Train,” from the sweet sludge of “Honey” to the spacey bliss of the last four minutes of their version of “Kangaroo,” Sixteen Deluxe covered a lot of sonic ground that couldn’t have even been contemplated without all those pedals.
There were actually some folks in mid-90s Austin who like holdouts from Newport ‘65 knocked Sixteen Deluxe for its guitarists’ - how shall I put this? - aggressive fondness for gear, as if music can’t be created on anything other than an untouched acoustic instrument. Other people knocked them because everyone else touted them as Austin’s Next Big Thing, or because they had a video on 120 Minutes, or because an MTV series used 16D's hooky "Idea" as its theme song, or because they got signed to a major, or because they weren’t playing the right kind of music, whatever that is. All those specific complaints matter today like so much middle-school gossip. Every band has its detractors and the fact of the matter is, you either love the kind of sweet noise that a band like 16D makes or you don’t. In mid-90s Austin there were a lot of people who did. 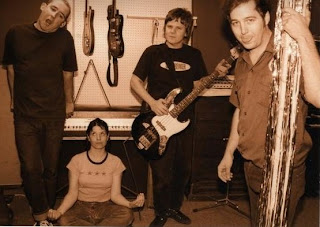 I always told Jeff back then that I thought Sixteen Deluxe had everything they needed to be the next big thing. They wrote solid pop songs that still had a serious rock sensibility thanks to a solid rhythm session. Their sound, a snappy fusion of shoegaze/space rock and power pop with just the right occasional touch of snarl, was unlike anyone else recording at the time. Every band with any kind of space-rock credentials who rolled the capital city back then - The Flaming Lips, Medicine, Mercury Rev, Stereolab, Swervedriver, and countless others - seemed to have Austin’s Next Big Thing as their opening act. And at a time when indie cred seemed to go a long way in paving the road to success they had plenty of it, coming as they did from Austin and having released their first album on the record label owned by the Butthole Surfers’ drummer, King Coffey. Along with bands like And You Will Know Us By The Trail Of Dead and Spoon, Sixteen Deluxe seemed to own the town, playing whenever they wanted at Emo’s, The Electric Lounge, Liberty Lunch, and sometimes even down at the cramped confines of the Hole in the Wall on Guadalupe. Later they toured opening for Luna and The Jesus and Mary Chain, and on their own with other indie bands like Little Red Rocket splitting the bill. All that, and yet…
And yet. I still think I was right about their potential, but one of the funny things about potential is that sometimes it just stays what it already is. Getting signed by Warner Bros. could have been the beginning of something big, but it turned into one of those standard 90s “indie band gets snapped up by record company” stories where the band’s major label release (in this case the solid Emits Showers of Sparks) didn’t light up the charts like the second coming of Nevermind. They weren’t shown the door in the manner of, say, Spoon after Elektra released A Series Of Sneaks, but by ‘98 it was clear the relationship wasn’t going anywhere and the band asked to be released from its contract. WB agreed. 16D put out a few more indie label releases after that but when Steven called it quits the drummer’s spot began to become the revolving door it had been before his arrival***. When Carrie left the band in 2000, Sixteen Deluxe was no more. 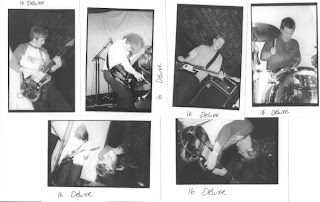 No more, that is, until this year. There was a time when 99% of bands disappeared forever once they broke up, but thankfully we live in an age where the reunion tour is alive and well and no longer reserved for arena rock dinosaurs. The internet is a greenhouse for the fanbases of old indie favorites like The Pixies, Pavement, Big Star and, yes, Sixteen Deluxe, bands who are now given the chance to reconnect with not just long-time lovers of their music but also the others who have come along in the intervening years, people who sometimes weren’t even born until long after the music had been forgotten by all but the die-hards and used-record-bin scavengers.
There’s a certain love that kind of latecoming fan has, a love that isn’t attached to record reviews or how cool scenesters think a band is or whether they’ll get laid if some hot chick finds out they’re a fan. It’s all about the music, and that’s as beautiful a thing as there is. I know there are at least a few of those fans out there, if for no other reason than SPIN Magazine naming Sixteen Deluxe one of the ten Greatest Bands You’ve (Probably) Never Heard last year. I hope the latecomers fill themselves up on everything they missed in the mid-90s, and then some, when 16D takes to the stage on March 13th at The Mohawk in Austin, and not too much later at SXSW. I’d be right there soaking it all up with them if I could.
* - Big Star actually recorded a version of “Femme Fatale” off Velvet Underground & Nico in 1974.
** - Smith’s delicate solo acoustic rendering of “Thirteen,” recorded for the soundtrack to Mike Mills’ film Thumbsucker, was one of the very last things he ever recorded.
*** - An old high school classmate of mine, Sean McFalls, actually ended up becoming Sixteen Deluxe's last official drummer of record. He and I once made an anti-drug video for a group project in health class, the plotline of which involved my miniature schnauzer abusing inhalants and running over Gumby with a pickup truck. True story.
Posted by Spaceman at 8:09 AM