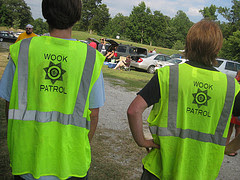 We just received special intel from our forces on the ground in Bethel Woods. W00k Patrol HQ is now issuing a WOOK ALERT for the next three nights....

Packs of Wooks are currently descending upon Bethel Woods. An entire colony has set up a camp in surrounding wooded areas.

Wooks can be found sleeping in trees, port-o-potties, and lush shrubbery areas -- so it's best to proceed in those areas with extreme caution.

Wooks will also smoke all of your stash, so make sure you secure your nugs.

Most importantly, do not feed the wooks after Midnight and especially don't give them any molly under any circumstance.

In addition... the camping fiasco at Yasgur's farm is threatening to ruin the fun for many folks headed out to kick off the summer tour. Thousands of homeless heads in desperate need of lodging might become prey for roving bands of gypsies, wooks, and local yokels.

Please advised to avoid any last-minute camping scams from anyone with a mullet wearing a Megadeath t-shirt, foul-smelling people in ornate clothing speaking in peculiar and unintelligible accents, and anyone with crystals danging from their dreadlocks.

Disclaimer: If you don't know, W00k Patrol is Coventry Music crew's elite unit of special forces. We're here to protect and serve all spacekids and spunions from potential evil forces in the lot.

Please have fun this weekend in Bethel Woods. Here's some veteran advice...

1. Drink lots of water.
2. Don't buy party favors from sketched out wooks or undercover officers.
3. Hugs are free. Don't pay for any.
4. Don't throw glowsticks at the band -- unless they play TTE.

And don't forget about Dr. Pauly's Rules for Psychedelic Usage:

1. It colder outside than you think. Bring a hoodie.
2. No one knows you're tripping until you tell them.
3. You cannot fly.

That's it for now. Stay tuned for future alerts. Let's keep the scene fun and friendly.
Posted by Pauly at 3:33 PM