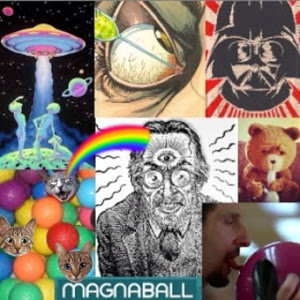 Big Day Saturday with 4 sets (3 official and 1 unofficial). Afternoon set in addition to a normal two-set show, plus the late-night "secret set" at the Drive-In Theatre.

MagnaBall is/was webcast by LivePhish.com. Also tune into Sirius XM radio or The Bunny for simulcast of the sets. Here's the audio link: Mixlr.com/TheBunny.

Check out our MagnaBall MAP of the festy grounds.

So here's what you missed on Saturday...

Set 1:  Divided Sky, MoMA Dance, Mound, Army of One, Scabbard, Sample in a Jah, Tube, Halfway to the Moon, Camel Walk, How Many People Are You, Circus Comes to Town, Undermind, Antelope

Overall Report: Set 1 mellow afternoon festy setting with a Mound bustout. Set 2 anchored by a juicy 46 Days and trippy Tweezer. The unexpected Big-Ass-Jam of the night went to Caspian. Yes, Caspian is still what everyone's raving about. Set 3's peak moments included Cities > Light. And that late-night secret set at the Drive-In? Phish opened up a portal to another dimension during a 45-minute tour of deep space...

Le Phish onstage at 3:38pm ET with Divided Sky (last opener was Red Rocks according to @change100). Sky = perfect summery afternoon song. Church of Phish officially in session... MoMA funk ass grooving... Mound bustout. Slop-city, but who cared?... The girlfriend noted that Page nailed all the high notes in Army of One. "For a dude, not easy!"... TAB minor-league Scabbard up next. "Don't want no methadone," joked @change100... Sample in a Jar sing-a-long... Tube quickie (cracked 4:20 mark)... Bathroom-line inducing Halfway to the Moon... Re-gained crowd's trust with Camel Walk funk... Majority of my multiple personalities dug How Many People. Wildo thought it was too wordy... Circus commentary on us (we're the savages man)... Undermind = Feed Fish. To avoid sluggishness and surliness, we must feed l'octopus living inside Fish every 3 hours w/ chunks of raw meat -- squirrels, gophers, pigeons, small critters etc...  "Antelope trotting out of the bullpen like Mariano Rivera," said @greyflannldwarf. Instead of Antelope, I longed for a random cover like that epic Monkey Man Sbustout at SuperBall... 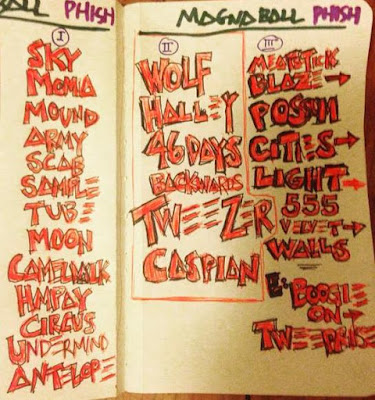 Set 2 resumed at 8:04pm... @change100 noticed wardrobe changes, particularly Gordo's scarf. Trey ditched first set red hoodie (Satan) for a white one (Reptilian overlord aka the Lizard Queen "Lizzie" Elizabeth)... Wolfman's quick submersion, but nothing too deep... Bitchin' Halley's Comet met the inevitable ripcord for a 2.0 tune... 46 Days popular deep-space rocket launcher. Intense 46 Daze-jam. Gnarly. Dirty. Destructive, yet with absurd precision like a dozen swirling ninja dwarfs with machetes cutting through the jungle canopy... Lost my chubby; another ripcord. Backwards or "Backflips down the Lumber Line" slurred Schwilly Meg... Trey took off his hoodie. His QBR jumped an average of 23.5 pts on nights he ditched hoodies mid- set... Tweezer. You knew it was lurking. Hyper-psychedelic Tweezer nipped at the farthest edges of the universe bending time/space. Apex of the night (perhaps weekend?)...

Shit got a little bit awkward. Tweezer ripcord Caspian. Ouch. The sports equivalent was an INT returned for a touchdown. Big Red fuckerpants threw a Pick-6. Yup, they boys trolled us hard (Backwards/Caspian in span of three songs) while lighting stacks of our money on fire and roasting baby albino gators stuffed with foie gras... Caspian quickly won me over. Trey answered his Pick-6 with a TD! Zesty. Fiery. Fiesty. Casp jam flirted and floated back into Tweezer's orbit with some Fish/Buddy Miles + Trey/Jimi whacka whakka for a sec. I got lost in that time warp/black hole. Tweezer/Caspian/Caspian/Tweezer? Whatever, wherever, whichever... that intense jam ended the 72-min set...

Set 3 kicked off with a brief Meatstick... The rookie song of the night, Blaze On, covered lot of ground quickly with Dead-like notes ricocheting everywhere. One of the better version in its short history... Morphed into chugging Possum... Cities delivered with Leo churning out funk-flavored buttah balls... Light always elevates the sparkly crowd to an heightened level of blissful consciousness, like doing yoga on a beach full of puppies... 555 had a cool new intro...  The slow Velvet Sea gave Fish a much-needed breather for Fish... Love the smooth haunting Page into on Walls of the Cave. Rocking and reeling Walls ended the set... Encore was a double dip of vanilla: Boogie On and Tweeprise...

Oh Set 4? The late night secret set was a 45-minute ambient tour of deep space while Phish played hidden behind the drive-in screen. The crowd had no idea their collective brain energy was being manipulated by John McAfee and alien overlords as a part of a shadow government experiment to dial up a Stargate and open a portal to an alternate dimension...

Day 2 Highlights: Mound, Tweezer > Caspian, Cities > Light. And don't sleep on Blaze On. Ah, and make sure you are in the proper head space to re-listen to the Space Jam...  Two nights dunzo. One more to go. Can't wait. Smoke em if you got em....

Tonight's show was magic in the making! I live-streamed it with broseph, my kid was dancing in circles around us. Thank you for your insight, your blog is a big part pf the experience, thanks for taking the time to write it. See you in hopefully our next phish show

Today's version of cities>light will lull me to sleep tonight...

These are NOT the droids...Drive-in jam (only Set 4)

Thank you, gents! I was curious if the drive-in set would pop up. SO excited to give that a spin.

CAN WE GET A REEEEEEDROIDDD :)

Ever wanted to get free Google+ Circles?
Did you know that you can get these AUTOMATICALLY AND ABSOLUTELY FOR FREE by registering on Like 4 Like?