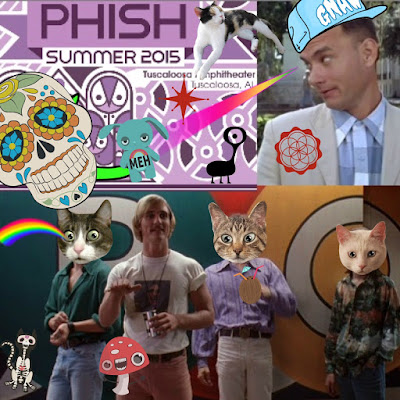 Phish in Alabama, what could possibly go wrong? Never miss a Sunday show, eh? The party migrated to Tuscaloosa.

E: Day in the Life

Phish's southern immersion continued with a stop in the heady lil Alabama own of Tuscaloosa. Phish was deep in the heart of the Bible Belt. You really can't say things like "never miss a Sunday" show in that neck of the woods and have local population think you're talking about Sunday morning church service. Local preachers are more than shepherds herding an aimless flock; they have unwieldy god-like power in a sinister, creepy cult-like way. If you've ever driven through the South or even the Midwest and come across a gigantic white tent in the middle of nowhere, you've stumbled upon a Revival -- a religious ceremony where traveling charlatans cum preachers put on one hell of a show for the often bored but perpetually spiritually thirsty locals. Most impromptu tent gathering are free, yet donations are strongly encouraged (the Holy Spirit don't dance for free, y'all). Phish set up their version of a church tent alongside the Black Warrior River. The Sunday congregation included the usual rabid zealots and curious soul searchers alike. Thanks to @lvnphish, the gospel of Phish was broadcast to the world in real time... Ceremonies commenced at 7:36pm, otherwise known Saint Peter's favorite time of the day (yeah, this is the shit we learn in Catholic school). Crowd-pleasing Sample in a Jar kicked things off, followed by a sanitized version of Chalkdust that never went toward the deep end of the pool. The first two songs indicated a "greatest hits" set was on the table until we got a legit bustout... Trainsong was probably inspired by the trains passing through, but those slow songs entice drunkards to chat, which is whenever Phish is playing to a whiskey-moonshine crowd, they need to keep the slow tunes to a minimum and play loud as fuck to drown out any uber-chatty drunks... Still sounds like a TAB song off of Shine, but upbeat rendition of Devotion to a Dream... Flabbergasted for a Meat bustout. Only gets played only once a tour. Sure it's only a coincidence, but four days earlier, we Twitter-bombed Gordo and begged him to play MEAT... Maze seemed very focused and on point in a sloppy kinda of way, but it all about energy right? Phish used to make hairpin turns around sharp corners in Maze, but now they just blow through walls to find the exit... The Line was another new song that was like cat nip for shit-faced-talkers... A tender Roggae, but too many talkers (bathtub meth is a horrible drug) to fully appreciate... Finally got some thunder and darkness with My Friend My Friend. I realized My Friend is the guy, with a suitcase of primo-blow and a Russian webcam girlfriend, you call up to rage it hard with the moment your wife goes out of town; or for my female readers, when your husband goes out of town for his childish fantasy football draft, My Friend is your hot-mess of a girlfriend (with a coke-dealing "boyfriend") who crushes an entire box of Rose with you while ripping Lohan-sized rails off a Williams and Sonoma polished-nickel kitchen island)... Thought 46 Days was gonna close out the set, but they kept it on a short leash and let Cavern take on the roll of mop-up duty... The most powerful moment of any church service is the sermon. Everything else is usually just a ritual or formality. But the sermon is when the preacher calls you out and shuttles you to the edge of the spiritual abyss. You have two choices: be a heathen and turn back, or be a believer and take a leap of faith by jumping. The preacher's job is to get you to jump and he dissuades you from turning back by scaring the bejesus out of you -- evoking fire and brimstone and using your greatest fears against you so you really have no choice but to jump... Like a hopeless cult-member, I followed Phish across America because I loved standing on that slippery edge and diving head first into the unknown. Phish is constantly luring us to the edge but whenever we take that leap of faith, we never know what we're going to get. That's how I feel about every Down With Disease, or every set 2 opener for that matter this tour. We never know what we will get but sometimes there's salvation waiting for us. DWD had some Piper licks and the worm popping its head out around 13-14 minutes. Felt like Gordo said "no" and instead the jam cooled down in a different direction... Camelwalk popped up, strutted out for a funk-party, and made a quick exit...


Seven Below has always been its own beast, but a fickle one. Pedal-happy Trey took the Seven into the Mutrony zone. I dug the underrated Seven jam as much as the DWD/Piper-fakeout segment... Fuego seemed phoned-in this tour, but this one had a little extra hot sauce because it was the foreplay to a dance party...

Was feeling the 2001 vibes underneath Irving Azoff's Mothership in LA, but the boys saved the mothership connection for Alabama. Dancing away the evil spirits. Shaking out the demons. Purging the soul through a 2001 Dance Party... Hood was short and sweet. Whiskey-coke-drunk Spreadnecks and bath-salted-out-frat-daddy-Chads were screaming "BALLS" instead of "HOOD" during Harry Hood. Both are equally childish. But I like a good testicle joke. I wished I had a portable pen with stealth stun-gun capabilities so I could walk around at shows and shock douchenozzles in the nuts. ZOOOOOINK! Enjoy the piss-stained cargo shorts, Chad! ZOOOOOOOINK!... Speed-demon Possum closed the set. Like an all-star relief pitcher, it was a 1-2-3 inning... Another 7-song second set (6 out of 9 shows included set 2s that were only 6-7 songs), which means less ADD Trey and more group jamming... Page loves those classic rock covers. I keep beating this dead horse, but Leo slays covers. We got a third encore cover this tour (Loving Cup in Dallas and Rock and Roll the previous night) and a nod to the Beatles with Day in the Life... Summer tour is nine shows in and we have another high-water mark with the DWD. Seems like every night Phish is luring us to the edge of the abyss and asks us to take a leap of faith with them on some big jam (e.g. Bend Simple, Shoreline Twist, LA No Man's, ATL1 KDF, ATL2 Tweezer, Bama's DWD)... Religious circus migrates to Nashville then KC before returning to the Midwest next weekend.

Thanks again. LivePhish app wasn't working, or even the desktop one. So this is extra appreciated today.

Thank you very, very much!