Phish-uncle Essentials 001: We're Only In It For The Money

Part I: Hi Boys And Girls, I'm Jimmy Carl Black, And I'm The Indian Of The Group

Hello. My name is Julius_Goat. I play poker, write fiction, and listen to music, not always in that order.

First, the Phish thing. Let's get this out of the way so that I am properly vetted. Much as I love the band, as many shows as I've collected and listened to, as familiar as I may be with most of their numbers, I've never been to a live Phish show. My excuse? Hey, look over THERE!

Pauly's been nice enough to let me ramble in this space. It's the first time that I've been added on to a previously existing blog -- a fun, somewhat flattering, experience. It's kind of like entering into a college house, fraternity or otherwise, with an existing history. There's people already here, a fun and funky vibe, it's a little bit messy, and it smells like pachouli oil and old pot fumes.

I'm going to try to make a signature series here, which I've titled, all spur-of-the-moment, "Phish-uncle Essentials". In this series, I'll ramble, and then (maybe) tie it back to Phish. That's about it.

To explain my terminology, in brief:

Phish-uncle (n) 1. A musical artist or group predating the jam rock bluegrass barbershop jazz quartet Phish, whose motifs, methods, or signature sounds are similar enough to one or more aspects of Phish as to make their influence upon Phish obvious or highly likely 2. A musical artist or group who, though not showing obvious influence upon Phish, are intricate in composition, experimental in execution, and/or improvisational in performance. 3. Anything Julius_Goat wants to write about, if Julius_Goat is honest about it. 4. But he'll try to stay on point. 5. Though he sometimes gets off topic.

essential (adj) superlative indicating that, if you haven't checked out this album, then get with the program already, buckwheat.

Now that we've got that behind us (and I'm just as relieved as you are), here is the musical genius Frank Zappa. 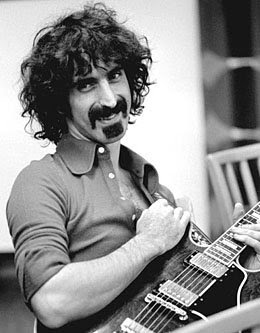 Here is Frank Zappa and his late sixties rock/craziness band, The Mothers of Invention.

Here is the greatest album (out of many) ever produced by Frank Zappa and The Mothers of Invention. 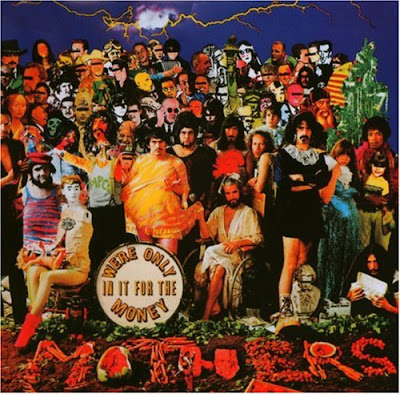 As you've probably already noticed, We're Only In It For The Money sports a rather obvious parody of the most iconic album covers of all time. What might not be clear to you is that it is also better than the famed Sgt. Pepper cover. This isn't subjective, by the way; as the late Bill Hicks said, I can prove this mathematically, using an etch-a-sketch. Much like the album itself, it keeps unfolding as you search it for acid-tongue-in-cheek reference. It's a beautiful pie in the face of the Official Greatest Album Of All Time.

If you're unfamiliar with the fellow, Zappa was a true iconoclast, both musically -- more on this in a bit -- and socially. Even within the rock scene he doesn't really seem to play ball. A cerebral, technically masterful guitarist with a bent for high-end orchestration and production, Zappa is just as likely -- maybe more so -- to use his gifts to create the technically-proficient equivalent to an atonal fart in church as an art song. It's a proclivity that often leaves him in the novelty rock ghetto, and it's probably why his biggest hit was "Valley Girl" the 1982 goof he did with his daughter, Moon-Unit. I've seen him lumped with Weird Al Yankovich. I've got nothing against Weird Al, heaven forbid, but it's just not right. It's comparing apples and crocodiles.

This platter dropped in 1968, at the height of the hippy drippy love-in that was radiating out (so the story goes) from the porches of Haight Ashbury and spreading peace throughout the country, Frank Zappa went ahead and put out this album, a poison plum chucked at the collective heads, and Heads, of the sixties. The target was all that was fatuous and empty and dark in society, on all sides. It's shock-and-awe satire, tough love minus the love, and poeser hippies (see the monologue at 1:45 of Who Needs The Peace Corps?) and hypocrite squares (Bow Tie Daddy) alike get scorched. Zappa's not tied to ideology; it's phoniness that he loathes.

OK, so how does all this equal Phish-uncle? Trey and Fish and Mike and Paige are not exactly rabble-rousers. Land this plane, Goat.

It's in the invention, of course. The tonal shifts. The reconition that it's an instrument, whatever 'it' may be. This is a guy who wouldn't be afraid to solo on the vacuum cleaner of destiny. (Remind me sometime to post the video of Zappa at 22 playing a bicycle on the Steve Allen show.) He's willing to hodge-podge his influences in much the same way, and produce out of the cacophony of doo-wop, rock, acid jazz, horrifying yelps, whines, something that lends itself to new discovery with each return trip. Consider, if you will, "Union Station", the unholy product of an Oh Kee Pah Ceremony gone awry, 26 completely unhearable minutes on the backfield of Junta — or completely unhearable for me the first time I came to it, that is. At some point, though, I forgot to skip, and my subconsious allowed itself to notice how the musical ideas take hold, gel and melt back from whence they came. Very neat.

So it is with We're Only In It For The Money. The first track is so unmusical it seems to be making a mockery of the idea of music, just as the cover mocks the idea of album cover, the title mocks the idea of titles. Tracks end with odd little skits, paranoid whispers, inhuman screams. The whole experience is designed to keep you on edge, throw you off your game. After the first time through, I didn't listen to this again for awhile. But the next time, I started hearing it take form. I noticed that there was music all through the madness, and most of it was brilliant. Even that off-putting opening track took on an insane rhythmic logic.

And, finally, I noticed how Zappa, after eviscerating an entire decade, in the later tracks found curmudgeonly veins of hope. It's an answer of sorts. We're all freaks. The key to true Free Love seeing that we're all the Other People. And then getting on with it.

Email ThisBlogThis!Share to TwitterShare to FacebookShare to Pinterest
Labels: Frank Zappa and the Mothers Of Invention, Phish Uncles

Way to hit a HR in your first AB in the show!

As in the (deleted) Pulp Fiction scene where Mia Wallace says, "My theory is that when it comes to important subjects, there's only two ways a person can answer. For example, there's two kinds of people in this world, Elvis people and Beatles people. Now Beatles people can like Elvis. And Elvis people can like the Beatles. But nobody likes them both equally. Somewhere you have to make a choice. And that choice tells me who you are."... I've always joked that there were two types of Phishheads - the Zappa people and Grateful Dead(heads). I like the Grateful Dead, and have grown to like/appreciate them more each year. Though, I am without a doubt, the Zappa type of Phishhead.

Oh, damn, BT. I love the analogy. Color me a Zappa-type, too, obviously, much as I dig the Dead.

Though a third rail of entry may just be the Pink Phloyd Express, no?

Really interesting article. I have writen a few academic articles on Zappa and have recently posted a couple of blog entries on http://paulcarrmusings.wordpress.com/

Since I am unable to admit a mistake, I'm afraid I'll have to pretend that I meant Allison Kruass's band.

So yes, Allison Krauss's band is 26 minutes long. And on Junta.

This is going to be a hard argument to win.