Concert review: Neon Indian with Sunbears! and BC the Black Child at Crowbar 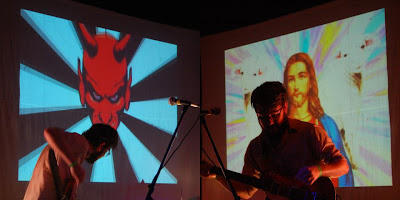 My crosspost from Tampa's Daily Loaf

If you had popped your head in to the Crowbar this past Tuesday night, you would have never known that the headlining band Neon Indian, was — as the inebriated and prancing band manager stated — “on top of the music world.” Alan Palermo’s latest project had just officially released their debut, Psychic Chasms, and scored a lofty 8.6 and “Best New Music” from the wordy, indie rock staple Pitchfork. I asked Palermo if he smiled or rolled his eyes at the recent good press. He laughed and humbly replied that he thought it was “great news.” Despite his soft spoken, unpretentious manner, Palermo is definitely the electro-rock star the indie press lauds him as. His first project, the short-lived Ghosthustler, stirred buzz with its “Parking Lot Nights” video. Vega, another ongoing Palermo project, has garnered similar praise. No more than 100 or so patrons were in attendance along with another dozen who raged the dance floor during the short, but tight set. Seeing Neon Indian made me nostalgic for a time I wasn’t even around for — it’s like if Billy Ocean took some good drugs and covered Hall and Oates songs for an hour. One thing missing was any visuals. This would have been a problem, but opener SUNBEARS! (pictured) brought enough lights, videos and confetti to cover everyone.

Jacksonville’s SUNBEARS! — touted as one of the better Florida indie bands — lived up to much of the hype with great arrangements, energy and enough Flaming Lips shtick to fill up Wayne Coyne’s bubble. While the two-some + computer make good music and put on a real fun show, by the end of their set, I’d had all I could handle of singer Jonathan Berlin’s Ben Gibbard-ish delivery and junior high diary lyrics.

Usually, I don’t make it to a show early enough, or am intrigued enough to catch the first act on a three-band bill, but Tampa-based MC, BC the Black Child, blew the minds of those who were quick enough to decipher his lyrics. BC rhymes in a furious pace, tight on the beat, and favors positive and conscious poetry over guns, money and ass. Check out his featured track on the rock the dub blog – “Ode to Gil Scott Heron” featuring Saul Williams.

For those who don’t know, an average Tuesday night at the Crowbar is a good time. Soft Rock Renegades spin indie hits and other tasty variousness in the open air patio and $5 liters of Dogfish Head 60 Minute IPA and Abita Purple Haze can be had by those who enjoy tasty brews. For this week’s edition, the guys at THX management added a darn good show to the mix.