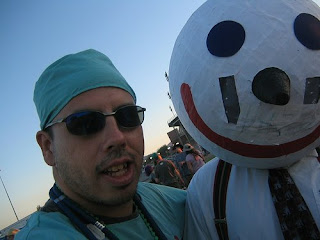 Pauly is a writer originally from New York City and currently resides in West L.A., California.

Pauly spent seven years in Las Vegas as a reporter specializing in poker, sportsbetting, and the gaming industry. He authored a non-fiction book about his experiences as a poker reporter... Lost Vegas: The Redneck Riviera, Existentialist Conversations with Strippers, and the World Series of Poker. He also penned of a novel titled Jack Tripper Stole My Dog. Proceeds to all of his books go toward running this site and funding Phish tour.

Pauly's newest novel, a rock-n-roll novel titled Fried Peaches, is due out sometime before Spring 2018.

Pauly started Coventry after he got back from Vermont in August 2004 and finally washed all that mud off his feet. He wanted Coventry to be a place for his friends to share their Coventry experiences. It then turned into a blog about post-Phish life and eventually evolved into a group blog where the contributors share their favorite music, talk about the stories that happened at the concerts they saw and festivals they attended.

Pauly is an admitted Deadhead and has seen the Grateful Dead 46 times. One of the greatest moments of his life was meeting Jerry Gracia a couple of months before his death in the summer of 1995.

Pauly saw Phish over 350 times (151 shows from 1989-2004 and 200+ shows in the 3.0 era) and even caught six shows in Japan in June of 2000. He's been to epic moments in Phishtory such as Big Cypress and the Hampton Reunion shows in 2009. He walked into the final Coventry shows after being turned away at the interstate like so many other fans.

In addition to Coventry Music, Pauly writes for several other blogs including Tao of Pauly, Tao of Poker, and Tao of Bacon. You can follow Pauly on Twitter... @taopauly. He also manages the twitter feed for @CoventryMusic while Phish is on tour.
Posted by Pauly at 4:20 AM

Not sure if you've gotten around to catching any of The Weather Underground lately. They're from your "new home" of LA.

Does anyone know where the T-shirts featured at the top of the blog came from? I found Mike and Page at Battery Street Jean in Burlington and wondered the history. I actually saw Page downtown while wearing his face and he said, "Hey that's me!" Please email me at tonybonez@gmail.com

I have been a longtime follower of Tao and have now been reading Coventry. I have never met a poker enthusiast who was into Phish? Any interest in hanging with your crew for the Gorge/San Fran shows? I understand, if it's cool if I'm not, but the prop betting that I could add to the group could be epic.

your bio really should just read, "pauly is the man!"