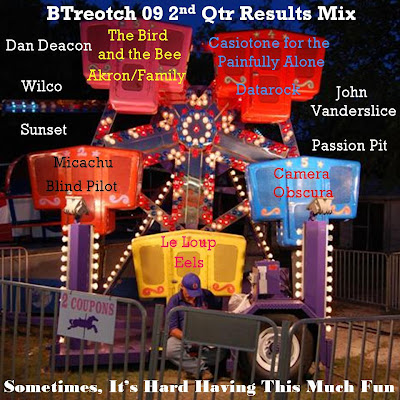 April, May & June. Too much shit has been going on. It's been great though. Weddings, shows, baptisms, vacations & conferences. Too many flashing lights & noise. No A/C in south Florida for three weeks. Austin, Germanfest, Dallas, the Red River, Tennessee & Bonnaroo. Too much face time with men, women & horses in uniform. Bologna & cheese sandwiches are shit. Phish is still the shit. It doesn't slow down. Connecticut, NYC, Flagler Beach, Hawaii & the bunk dank of Waikiki. WTF happened to Juliet? I just spilled water on my laptop the other day losing the function of my 'k' and 'l' keys - I had to remap my keyboard and now I can't make brackets. What a life. It's cliche, but music gets me through it. As always, this should be played in it's entirety the first time through and with quality headphones so you can keep your shitty music to yourself.

The Bird and The Bee put out their second album - it doesn't melt me like their first one did, but its got some great tracks (plus an ode to David Lee Roth). The band/artist whose show I want to see the most is now Dan Deacon. He seems to be an uber-hipster nerd at first glance - an all-star from lookatthisfuckinghipster.com - but from listening to his live shows he appears to throw any pretension out the window. Crowd participation via dance-offs, choreography and just silliness run rampant it seems. The 8 minute "Snookered" is my favorite song off this mix. Strawberry Shortcake turned me onto Le Loup - Canto I is actually from their very chill 2007 album. They sound like the type of band I'd love to play in. I first heard Camera Obscura from Justin's epic 2006 mix (see the comments from this post and 2007 mix) - still one of my favorite mix tapes ever made. Fun, poppy and timeless - I secretly wish for lead-singer Tracyanne Campbell to come over to my house and sing this to my face.

Wilco of course put out a new album that is simply uninspiring save for a few songs. Their show at Bonnaroo was still excellent, but it seems that Jeff Tweedy opiate-free brain isn't going to allow for some of the madness that created Yankee Hotel Foxtrot and A Ghost is Born. Regardless, the massive "Bull Black Nova" is one of my favorite Wilco tracks. Leilani Polk's review pretty much nailed Akron/Family's newest album Set 'Em Wild, 'Em Free. Thankfully the loss of Ryan Vanderhoof from the band didn't destroy the great energy their albums possess. And I still haven't had the chance to see these guys either - I need to move from south Florida. "Sleepyhead" was released last year on an EP, but indie flavor-of-the-month Passion Pit just released a proper album. It's not as good as I hoped, but this song is the tits. They're like this year's MGMT. Micachu - the stage name of Mica Levi - makes music that goes all over the place. Not all of it is as infectious as "Golden Phone," but Jewelery is a great listen.

Sunset is an Austin band that none of my Austin friends seem to give a shit about. They made one of my favorite albums last year - The Glowing City - along with three other albums or cassettes. "I'm Not a Perfect Person" is just one of two songs they've released this year. Slackers. Austin figures into my John Vanderslice story as well - he was the first artist I saw after I moved there in 2001. Michael Yates took me to hear him at the Mohawk(?) where he performed solo. Vanderslice had a funny name and long blond hair at the time. I remember thinking he reminded me of a Nelson twin who went solo, took some drugs and wrote better songs. Datarock's "True Stories" makes the cut purely on the back of the Talking Heads' epicness. If this song was described to me before hand, I probably would not have given it a chance - but it's a sincere tribute to a band that has inspired so many different artists.

Admittedly, I don't now shit about Blind Pilot, but "The Story I Heard" melts me. It should be played anytime it rains. The highly underrated EELS finally released another album. It took four years, but Hombre Loco is worth the wait and your $9.99. Hopefully they'll tour, but I'm not holding my breath. They album I've listened to the most is far and away Casiotone for the Painfully Alone's Vs. Children. Essentially a concept piece following a Bonnie and Clyde story in retrospect. It's just 11 songs - lo-fi and simple - but filled with every emotion.

What have you guys been into?

The Mohawk wasn't The Mohawk back then. maybe the show was at The Mercury, the stage definitely faced south. Or my name ain't Bumpus the Internal Compass.

not new music, but im really into "Low Rider" by War. such a great party song.

SS: I almost put two Akron/Family songs on there - one song doesn't do it justice..

Bumpus: what else do you rememba'? (besides the time we fell in love and when we first met?)

Before listening I'm going to say excellent choices on Mr. Deacon, Akron/Family, and possibly Passion Pit (still up in the air about that one). It probably doesn't surprise you to know that I didn't really like Micachu. Everything else...bring it on.

I member that Britt Daniel was the other half of the bill that night. Solo, with cassette deck as drum machine. and that you lived with a guy who played D&D all day and never changed out of his robe.

I saw Camera Obscura the other night at Antone's. The lady sang the song to me.

She is a magical fairy person.

The more I listen to this, the more I agree that Passion Pit's song, "Sleepyhead" is the tits, a full C cup.

Here's the full Le Loup album, too, if anyone's interested.

thanks for the mix bro!
gonna rock this shit when i get home from the jobby job later.

i'm Keeping the fingers and toes crossed that the phish atlanta rumored date(s) are true!

D-Nice and I listened to the mix all the way through. We liked Le Loup-D was jammin'.

I thought that I hated The Bird and the Bee because of that violently gay "Love Letter to Japan" song. But I like the song in your mix.

Eels are cool. The lead singer's dad discovered the theory of parallel universes. My dad stores dead raccoons in his garage freezer.

I like Royksopp's new album. Their videos are neato, also. Bergen is the Norwegian Austin, only with less mosquitoes and butt sweat.

I still listen to The Walkmen's last album almost everyday. The Blue Route is a killer song. Is it just me?

Yeah, I need to get a hold of the Walkmen album..

If anyone else wants a full album, let me know and I'll post it..