Music From The Future and Outer Space 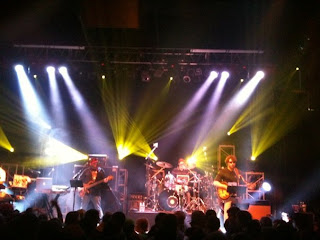 Thursday in Boulder felt a little mild- the crowd and the band were holding back something. After a fun Little Lai opener I felt the stand alone songs Flash Mob and Konkrete lost the energy that could never quite be recovered. Bisco opened the second set with what is arguably their YEM - House Dog Party Favor - but again it was a stand alone. The Thursday night Safety Dance>Abraxas>Digital Buddha segment got me sweating but I wanted more. I knew they could do better. I couldn't quite put my finger on it but knew somewhere something was missing.

Friday's show delivered where Thursday's show didn't - Bisco turned up the intensity. The crowd was a letting go to the flow of energy from the band. I thought the energy of Friday's show was off the charts. It was the kind of show where the band was jamming so well and seamlessly the set list is almost irrelevant. I make fun of Bisco sometimes for the relentless UNTZ UNTZ UNTZ but Friday's show had tempo changes and always kept the jams going somewhere. Boone reminded me of why he goes to see Disco Biscuits shows, and walking out of the Fox on Friday I truly felt like I was in outer space.

Video of Great Abyss by pameesi

Boone has got your back brAhs
http://tiny.cc/boone14