I never wrote a recap of New Year's Eve due to a couple of contributing factors; lack of time and bad notes. The primary factor was lack of time because I fled Miami in the wee hours of January 1st and I slept like 24 out of the next 36 hours when I returned to LA trying to recover for the four-day bender (and you can make an argument that I've been on a nine-week bender starting with Festival 8).

When I finally sobered up on Jan 3rd, the events of 12/31/09 seemed like a dream. I looked at the pictures. I read the setlist. I talked with my friends but the evening seemed like a dream. That's the other reason I failed to write something concrete -- I took horrible notes. I'm an avid note-taker and utilize Twitter as an electronic notebook and I also scribble down little nuggets, quotes, thoughts in my Moleskine notebook. However, on New Year's Eve I reached a state of inebriation where I was unable to record the events surrounding me. My notebook was sparse and soaked by sweat and champagne. I couldn't tweet because my palms were sweaty and my fingers were shaking like a Parkinson's patient after they ripped a rail of blow. Everytime I looked at my Blackberry, I became disoreinted and it became hard to focus. Sort of like when you are in a dream and try to read a sign, newspaper, or book -- for some reason the letters/words get jumbled and you're unable to make anything out. Well, that's how I felt most of the first and second sets on NYE. I had a tough time reading my Blackberry.

I was plastered after eating two doses of some of the cleanest liquid sunshine I had ever ingested. I could barely stand up let alone jot down any sort of coherent thoughts. As my buddy said, "I'm so fuckin' happy you took two."

Luckily music is the key to unlocking memories. I finally sat down in my office and listened to the entire New Year's Even concert from start to finish. At that point, little sparks and mini-flashbacks bombarded me while I sat at the laptop trying to re-create the events of 12/31/09. I got swept up in the wave -- which is even more odd that they played Swept Away at a moment when I was losing my mud.

Here's the thing... I purposely waited until I started walking up the steps of the AAA and went through security before I ingested my double-dose. I'm glad that I did because the doses hit me fast and hard. Shock and awe. A ton of bricks is a better description. As soon as I sat down in our row behind the stage, the visuals taunted me. The clusters of balloons attached to the roof of the venue were breathing. My eyes were distracted by anyone who walked by with shiny and sparkling things. The trails and tracers were everywhere and would not stop for almost 11 hours later. I told you it was some strong stuff, and there was a moment when I considered taking three -- one for each set.

I'm glad that I was in my seat and not having to wander through a crowd or kick a wook out of my seat when the doses seized control. I even tweet'd "Sweet Jesus, it's 8pm and the walls are already melting." Of course, that was my intended end result, however, I didn't want that to happen so fast. I was hoping to peak around 11pm or so, that's why I was surprised and morbidly concerned at the intense onset of the journey. Shit, if the walls are melting at 8pm, what the hell is the world going to look like come Midnight?

It had been a while since I completely fried my brain, probably since the Radiohead show in Golden Gate Park for Outside Lands festival in 2008. I went to 38 Phish shows in 2009 with the majority of them "sober shows" with marijuana being the only substance I sampled before/during/after the shows. I took on designated driver duties at different times for friends seeing Phish for the first time since they broke up. I wanted them to have a good time without worrying about getting home, so I stayed clean those nights. Since I had to drive a bunch for those spread out East Coast shows, I laid off the hard stuff. But even when I let it rip at Bonnaroo, Red Rocks, the Gorge, and Halloween... I kinda held back a bit because I still needed to save a little gas in the reserves (in those instances I had lengthy driving ahead and more shows to see or in Halloween's case, I had a major work assignment immediately after and couldn't show up all spun out).

I rushed up to the "edge" many times this year, but never crossed the line until Miami. Maybe it's maturity and that I'm in my late 30s and know that my body is not what it used to be.

For Miami and NYE, I was ready to dive head first into the darkness. I'm glad that I did because I had a blast and got to re-live those moments in the mid-90s when I ate so many mushrooms that Phish used to scare the living shit out of me with their music when we jumped down the rabbit hole into the depths of Hades, only to be pulled out of that tailspin by the boys on stage. It had been a while since I explored the sophilistic side of Phish's music but the only downside was lack of sufficient notes detailing my journey in Miami.

I've seen Phish on almost every possible drug imaginable (minus actual heroin, but I've eaten some pharmies which some would argue are stronger that the H train) and there's a difference in how the music affects you depending on what you're on. But there are other mitigating factors such as the environment, people around you, and your headspace which help alter how you process the music.

I made an effort to Phish sober many times during the 3.0 era so I can accurately gauge the quality of their playing. And yes, there's a certain cliche that fits -- sometimes certain drugs enhance the music. Parts of 2.0 were so horrendous, that I needed party favors to spice up the bland music. Alas, Phish 3.0 is an entirely different creation and concoction. It's a different beast. On NYE, the liquid sunshine shot me to the other side of the universe and I experienced the show from that warped perspective. 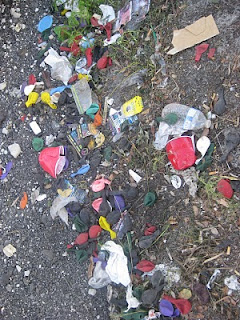 Just look down at the ground of any parking lot post-Phish and you'll see evidence that the inmates run the asylum like a roving band of miscreants. Trash. Empty baggies. Broken bottles. Popped balloons. Shoeless girl in fairy wings with blood trickling down her face. Spun out naked guys roaming the streets. Puppies cowering underneath SUVs in fear.

Some animals are snared in plastic handcuffs which the local law enforcement use as a last resort when the feral creatures lose self-control. As long as we stay within the herd, there's no harm to any of us. But the moment a few strays wander out into real society, that's when the trouble arises.

Phish is the Beastmaster taming the animals with their music. My friends have described Phish as an expanding and contracting organism that feeds off of the music. You have to go to a live show to see for yourself how a tiny cell morphs into a gigantic entity once the lights go down and the four take the stage. Some nights, the crowd is a tsunami wave that the band is trying to fight off with their music. Hold back the wave otherwise it will come crashing down on the entire stage and drown everyone. That's happened a few times like that natural disaster called Coventry.

Sometimes the crowd illuminated by Kurodas lights resembles a raging fire and depending on the different sections of certain songs -- Phish was trying to extinguish the inferno and at other times, they were fanning the flames. That's what the NYE show felt like to me. Sometimes Phish tossed barrels of gasoline onto the fire. With every explosion... I wanted more.
Posted by Pauly at 4:20 AM

I think that accurately describes how I felt during second set, esp. during Piper, Theme and Ghost.

And I only took one.

Man, that was well said.

Yeah, I wasn't even down in Miami, but that passage noted above accurately captures the flashback vibe of seeing 3.0 on the brink! I recall those 90s moments in a box, and there certainly ain't no chance of truly reliving those experiences, though it's definitely possible to feel it, through the looking glass, once again. Glad you had so much fun down there dude! Hope to catch up with you and your classy LOST/phish merch sometime at a once and future show in '10. PEACE.

...I'm jonesing for a bit more of your climactic writing about the experiences you had during the sets and specific songs.

Excellent write up my friend!
I too was spun out to the other side of the universe on NYE. In fact...i got pretty spun the other 3 nights, but for NYE i made sure i doubled up and put my helmet on for some serious bombs over gamehendge. If your goonna do it..do it right!! :)

I'm glad that i did. 12/31 was truly the epic culmination of an Epic week of straight up chillaxin miami style.

As always, your writing conjures up the atmosphere at the show. Spot on sir! Spot on!

Still a week later and i still glowing. I don't think i've ever felt this good after a run of shows like this.

I go because I enjoy laughing at people with an open container in my hand.

I'm just thankful to be exposed to this somewhat 'secret' side of happiness that I never felt inside before.

That, and for having some very special people now in my life who I wouldn't trade for anything in the world who don't mind when I get a little louder than an '11' and when I do ridiculously silly things.

I always enjoy hearing our crew's stories as if I was snuggled up on Grandpa's lap or learning about an ancient ritual from years passed...

You have to go to a live show to see for yourself how a tiny cell morphs into a gigantic entity once the lights go down and the four take the stage.

= how I always strive to feel in 'real life' and am now feeling through Phish!!!!

you obviously don't see shows in Portland and Seattle.

I've never seen a Phish show in Seattle. I lived there 2 years (97-98) and the closest they came both times was the Gorge. Actually the Portland Meadows shows were technically closer to Sea-town.

Usually the Green Crew cleans up after Phish, but they weren't patrolling these private lots at Miami.

Best collection of ringtones
Hi everybody!
Do you feel the ringtone of your cell phone is boring? Want to own the unique and unique ringtone on your phone? I recommend listing the best cell phone ringtones that you can download to your phone. Best quality ringtones below.

5 favorite ringtones you can refer and install:

There are also many other ringtones. All ringtones are free to download. You can search and reference more ringtones at my homepage: https://ringtonesmobile.net/

I need your evaluation.