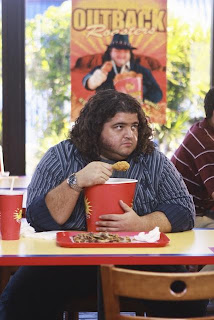 Another great episode! I have a strange craving for some fried chicken. Here is the setlist this week:

I am of the opinion that Desmond ran over Locke to give him a near death experience and make him remember the island. Some people are chatting about Desmond wanting revenge, but with Desmond's experiences last week I just don't see revenge as a part of his character now. With Ben there too we could have a situation set up were Locke is rushed to the Hospital, Dr. Linus by his side, and guess who operates on Locke and remembers everything? Jack.

I also think that Desmond can see what happens/is happening/happened in both timelines, brotha. Flocke pushed him into the well, but I think it is Desmond who is outplaying Flocke in the chess match of the island. Desmond is right over a pocket of electromagnetic energy- exactly where he is supposed to be.

Did anyone else catch the Seinfeld reference at the awards ceremony? Costanza is proud.

Can't wait for next week's episode, but I am sad I will miss it live. I will be at the 4/20 premier of the Phish 3D movie in Denver.

As always, head over to Hidden Track and join the discussion with Ryan and I. Don't forget there are still some LOST + Phish t-shirts left!
Posted by the joker at 4:20 PM

Email ThisBlogThis!Share to TwitterShare to FacebookShare to Pinterest
Labels: lost

i think you are exactly right about why Desmond ran over Locke. My brother and I were just talking about that very thing earlier today.

Right on -- These are always so much fun. Love the left-field "Wishing Well."