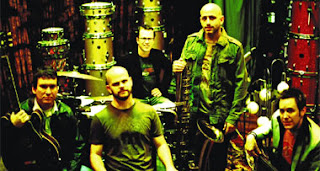 The G-men are ready to bring a New Orleans style party to your hometown! They are kicking off their fall tour with a gig in Flagstaff and they boys will be tearing it up this weekend at the House of Blues n Hollyweird.

For the majority of their shows, they will be having Chali 2na (of Jurassic 5), Mr. Lif and Boots Riley (of The Coup) as supporting acts, plus special guest Lifesavas.

Galactic will also be making their first ever appearance on the Conan O'Brien Show, which will be taped in New York City on November 19 on NBC in the afternoon. The show airs at 12:35am.

And here are some international dates as Galactic heads to France and Japan.

And lastly, the boys will be playing a couple of holiday shows to close out 2007.

Email ThisBlogThis!Share to TwitterShare to FacebookShare to Pinterest
Labels: Galactic