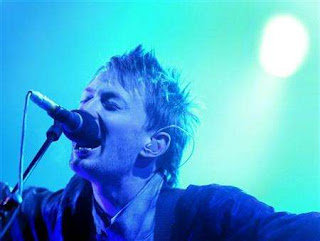 Last week, Radiohead released their seventh studio album In Rainbows onto the internet. Stop by their site www.inrainbows.com and you can download it and pay what you wish. I'm a cheap bastard and snagged it for free.

I heard some of the songs on In Rainbows when I caught Radiohead at Bonnaroo in 2006. The majority of them have been played in concert before and have been already floating around the interwebs.

I only listened to it once and will have to hear a few more times before I can trash it for being absolute crap or applaud it for being pure genius.

Of course, the folks over at Rolling Stone did a lackluster "track by track" review. At least it contains a couple of You Tube clips.
Posted by Pauly at 4:20 AM

Email ThisBlogThis!Share to TwitterShare to FacebookShare to Pinterest
Labels: Radiohead