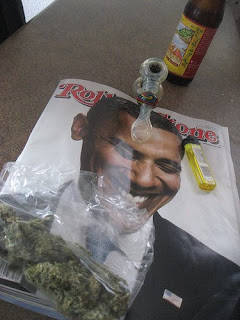 Interesting read... Will Obama End the War on Drugs? by Arianna Huffington (via AlterNet.org)

When it comes to addressing America's disastrous war on drugs, the Obama administration appears to be moving in the right direction -- albeit very, very cautiously.

On the rhetorical front, all the president's men are saying the right things.

In his first interview since being confirmed, Obama's new drug czar, Gil Kerlikowske, said that we need to stop looking at our drug problem as a war. "Regardless of how you try to explain to people it's a 'war on drugs" or a 'war on product,'" he told the Wall Street Journal, "people see war as a war on them. We're not at war with people in this country."

Also... check out Obama's Drug Czar Calls for End to 'War on Drugs' by Tony Newman.
Posted by Pauly at 4:20 AM

I live in Los Angeles and my connection for heady bud disappeared about 6 months ago. Uh oh, busted probably. So, my friends say "Get signed up for medical marijuana". I resisted because I have no medical condition like glaucoma that would allow me to be certified.

I ended going to a shitty, dark office in a shitty building off Santa Monica Boulevard in West Hollywood. Paid the clerk the money ($150), sat with a doctor for 2 minutes, spun some bullshit about insomnia and 10 minutes later I was across the street deciding between sativa or indica (sativa FTW), joint or bud etc.

It's a farce, I felt ridiculous doing it, but unless they totally shut down all dispensaries, I'm good to go.