Sorry I'm a few days late telling you about this...

Well the short story is that I got into Girl Talk on Friday and had a fuckin' blast.

There was kind of a disgusting scene outside the Fox, lots of people looking for tickets and the extras that were available were being offered for $60 ($15 face value). I eventually got in for $25 and Nicole was miracle’d at the last minute when a friend from Madison House discovered she had an extra. I berated a couple of kids trying to sell their extras for way too much money...I hope I made them feel bad but probably not.

It was a hot day in Boulder, nearing 100 degrees. It wasn't much cooler in the Fox, either. When I say I was dancing hard, that is nothing compared to the kids that got let up on stage. Or some of them- it was an interesting mix of kids that look like they were fresh from a shopping spree at American Apparel, indie rock kids who were too cool to dance, Boulder neo-hippies and high schoolers.

At some point in the show- I say at some point because it is completely impossible to describe what "song" it was with the onslaught of samples- the party really heated up. Tawny, Nicole and I looked over and caught the first awkward kiss between the two cute girls we had been dancing with. After they realized that it was ok for them to kiss, they let go and it was On Like Donkey Kong (technical term). Tawny made friends with them and by the encore the 3 were up on stage shakin' it. From that standpoint it was pretty much one of the hottest dance parties in recent memory.

The music was a seamless mix of tracks from the Girl Talk albums- It seemed like Greg is mixing in samples that are in pre-recorded packages he has prepared at home along with live beats. But it is hard to tell exactly what he is doing up there. I would say that most of the people at the Girl Talk show don't really care how he is doing it - we just want to get down. He can't be doing anything too intricate up there, mostly because he is getting grinded on by 100 of his newest friends that got on stage to dance.

Here are some low quality pictures taken from my crackberry...I know I am not living up to the Coventry standards and am sorry to say that I do not have video of the lez make out session mentioned earlier. 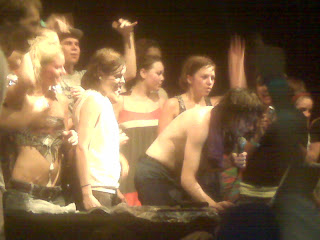 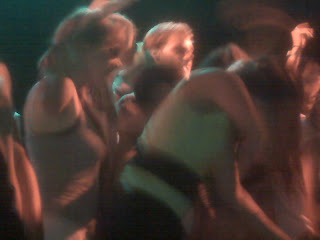 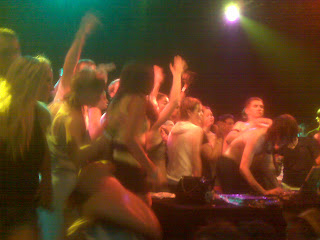 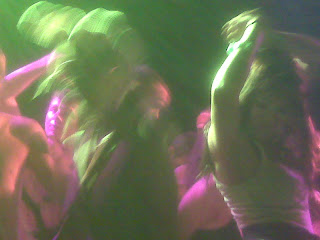 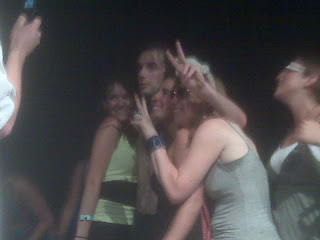 sweaty bodies makin' out and dancing = a perfect time!

sometimes, threesomes are 3 steps away. This is opposed to the normal, 17,000 steps away.