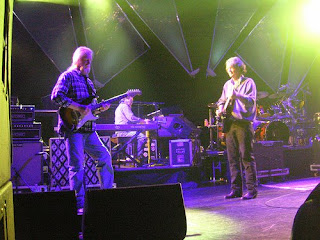 Mark the date. September 20th. That's the day when Widespread Panic gets inducted into the Georgia Music Hall of Fame!

Athens, Ga., July 18, 2008 - Widespread Panic will be inducted into the Georgia Music Hall of Fame at the 30th Georgia Music Hall of Fame Awards Show on Saturday, September 20th in Atlanta, GA. The show will broadcast live on Georgia Public Broadcasting and will include a special performance from the band. Past inductees include Georgia musicians including Ray Charles, Gladys Knight, R.E.M., and the Allman Brothers Band as well as industry professionals such as music attorney Joel Katz and record label owner Antonio “L.A.” Reid. "Sharing this honor... with so many of our greatest musical influences, is something I'm sure none of the Band members imagined when we first started making music together. September 20th is going to be a truly special day for the entire Widespread Panic Family," says John Bell, vocalist and founding member of Widespread Panic.

Widespread Panic was founded in Athens, GA in 1986 and has since become a national touring force that has landed in Pollstar’s top 50 tours of the year for the past decade, has sold 3 million albums and played over 2,374 shows over their career. Despite thousands of concerts, the band has managed to never perform the same set list twice. The band released their 10th studio album, Free Somehow, in February 2008 via their own Widespread Records and has a catalogue of 19 albums to date that includes 8 live albums and 1 compilation. Widespread Panic is currently on the road on their Summer 2008 tour, which kicked off with their 7th headlining performance at the Bonnaroo Music & Arts Festival. In addition to Bonnaroo, the band has headlined almost every major festival in the US including Lollapalooza, 10,000 Lakes, Rothbury, Austin City Limits, Jazz Aspen, Vegoose, and the New Orleans Jazz and Heritage Festival. Their incomparable live show has earned Widespread Panic attendance records across the country. This June, the Mayor of Denver, CO declared June 27 "Widespread Panic Day" in the City and County of Denver marking Widespread Panic’s 32nd sold out show at Red Rocks Amphitheatre- more than any other band in history.

Widespread Panic utilizes their large success to give back to the community. Widespread Panic has played an active role in the Georgia music community, most notably playing annual concerts that benefit “Tunes for Tots,” an organization dedicated to support music education in Georgia area schools. To date, the concerts have raised over $350,000. In addition, the band recently sponsored a home in New Orleans’ Lower 9th Ward through the Make It Right foundation which inspired fans to spearhead a house of their own, “The House that Widespread Panic Fans Built.” Their fans have also come together to form Panic Fans for Food, a volunteer organization that holds food drives at shows to benefit the local food bank in that market. To date, PFFF have collected over $70,000, 13 tons of food in 28 cities. Widespread Panic charitable contributions also include John Bell’s annual Hannah’s Buddies Charity Golf Classic that raises money for Spinal Muscular Atrophy research.

The 30th Annual Awards Banquet, to be held Saturday, Sept. 20 in the Thomas B. Murphy Ballroom of the Georgia World Congress Center in Atlanta, will recognize those who have made significant contributions to Georgia’s music industry. The banquet is hosted each year by the Friends of Georgia Music Festival, Inc. and the Senate Music Industry Committee.

Congrats to Panic. Well deserved guys!
Posted by Pauly at 4:20 AM