Friday night included several hours of serious partying in the local clubs in Denver that the Joker frequented such as Cervantes and Owlsley's. We caught Pretty Lights, Praang, and EOTO. That was some fun shit and Friday was the overall highlight on the long weekend. Too bad we peaked before the Mile High Festival began.

I woke up on Saturday super sluggish with a stiff back. I totaled my rental car about a month ago in Las Vegas and although I walked away from the accident without a scratch, some back pain lingered. I really felt the residual effects as far as way as in Colorado. Over the previous week or so, I was trying to ween my addiction to pain killers. Although I left Las Vegas in a good head space, I woke up in utter agony on Saturday morning. Only one thing would make my back feel better, so I popped a pain killer. That was a bad idea. Downers at a music festival? That's the opposite high that I actively seek at music festivals. I want to be up. Way up. Instead, I was faded most of the day and had to take several naps. Maybe I'm just getting old?

I blame the hot weather. Since I just finished a two month tour in Nevada, I was used to triple digit weather. A typical the Colorado summer is in th low 80s, but we were caught in a heat wave as temperatures raced past 90 and reached triple digits.

The pharmies caused utter dehydration and the sizzling sun didn't help things. With a lackluster bill on Saturday, combined with my faded self and the hot weather, I struggled to get super excited and enthusiastic about who we were seeing. I guess that's why I took naps in the middle of performances.

On Saturday, we had a late start and ventually arrived to the festival grounds around 1pm. We were in the far parking lot and had to endure a lengthy hike to the entrance. We missed Newton Faulkner... the dreadlocked crooner with an acoustic guitar from the UK. Instead, we wandered into a tent that featured Bob Schneider. That was my first time seeing him and the crowd was into his music. He's sort of the Bruce Springsteen of Austin most known for banging Sandra Bullock. Geez, what happened to her? 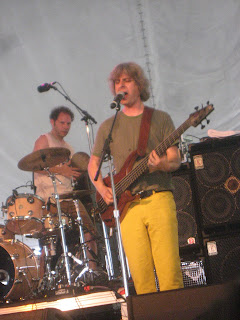 We got a good spot for Mike Gordon. Made me miss Phish. The crowd was into Mike, but it didn't 100% gel for me. He had some highlights, which appear in the video in a previous post, but I went in with low expectations and Mike's band barely met those. They were solid but you know, I'm going through Phish withdrawal. It's not Mike's fault. As the Joker said, "This band that Mike is playing with is so much better than his country band."

It was boiling during Steve Winwood. The highlights included Light Up or Leave Me Alone and Can't Find My Way Home. His newer material was lackluster and it was simply too hot so we bailed. The Joker suggested we grab some shade in one of the two music tents. That's how we ended up at Andrew Bird.

Andrew Bird is a regular on the festival circuit and one of those early afternoon artists who can snag an early slot and often sits in with other musicians during the afternoon and night. The stuff Bird played was out-there and different and just kinda weird. I didn't care because he was playing in the shade.

I caught some moe. and took a nap for a few minutes as I recharged my batteries. We left early to get a good spot for Spoon. We hung out behind the soundboard. The quality of sound was top notch and Spoon sounded amazing. I just had low energy and even napped during one song. The Joker and Change100 dug their set. Out of everyone I saw on Saturday, Spoon had the best technical performance.... meaning... they sounded good. I didn't know enough of their material to tell you if they fucked up a song or rocked out a high energy version of a specific tune.

We headed over to Micahel Franti and Spearhead to flash peace signs to him for Strawberry Shortcake. We hung out near a shrine in the back area of the stage Franti played. We drank and took pics.

We made a rookie move and tried to get food before Tom Petty's set. So did 25,000 other people. The result? Stuck in line for 30 minutes waiting my Illegal Pete's burrito. It was worth the wait, but we were super wasted in line. Everything I was on had kicked in at that point. I was mush, rolling hard and had itchy arms courtesy of the pain killers. The Joker was on fire and almost started a riot as our line slowly inched to the front.

Tom Petty was packed and we were somewhere in the back. I kept telling the Joker that Petty was outstandingly mediocre at best. I've seen Petty enough times to know if he had a hot set or just phoned it in. We checked out the monkey exhibit... 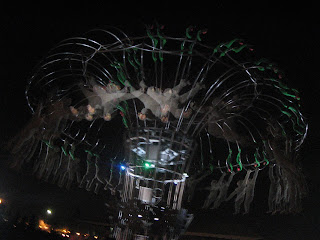 The monkeys at night
After tripping out on the monkeys, we sat in the waaaaaay back of Petty up on the side of a hill. If Change100 wasn't blocking me, I would have rolled down the entire hill. That's how wasted I was. We made fun of Petty's voice and the bad sing-alongers in the crowd. One girl was so wasted that she screamed out, "Play Free Fallin!" Petty had played it just twenty minutes earlier. Steve Winwood sat in for Gimme Some Lovin' which was sweet.

We crashed hard on Saturday night and woke up early on Sunday to rally. The lineup was definitely stronger on Saturday and we headed downtown to breakfast at one of the Joker's favorite diners called Sam's No. 3. I crushed an omelete and was ready to get to the festival... except traffic was kind of a bitch.

We found the secret food court inside the soccer stadium. We had no idea that area was open to the public on Saturday. They also had AC in the bathrooms. Nothing is worse than having to take a dump in 100 degree weather inside a sweltering port-o-pottie.

We missed Rose Hill Drive. We could have caught the end of their set, but they were playing at a stage out in the scorching sun. We caught the end of Alberta Cross and smoked tough. At the tent next door was Ingrid Michaelson. She reminded me of a more socially adjusted Ani DiFranco. Happy lesbian songs instead of angry dyke music. She did a cover of Ice Ice Baby > Parents Don't Understand. That whipped the crowd into a frenzy.

The New Mastersounds are my new favorite band. I have been on a serious kick the last six months on the British funk band that reminded me of Galactic circa 1998. They played twice at Langerado and I was eagerly awaiting their set on Sunday. They played a gig in Breckenridge the night before and also got caught up in the massive traffic jam that we were stuck in. They got a police escort and arrived in time so everyone could shake their booty. I skipped Tea Leaf Green in order to see The New Mastersounds.

The acoustic guitar dueling duo of Rodrigo y Gabriela was on the main stage for their 4pm set. We celebrated 4:20 with them before we headed back to one of the tents to see Grace Potter and the Nocturnals. I was more than please with their set. In fact the two acts I wanted to see the most came through in the clutch. New Mastersounds and Grace Potter were the highlights of the festival for me. Grace Potter is pretty hot and she frantically shook her ass during a couple of her high energy tunes.

We skipped John Mayer and hung out to drink and eat dinner in the secret food court. Afterwards we checked out a couple of song from The Roots before we migrated over to The Black Crowes. I wasn't familiar with their new material, but their set was solid as they mixed in a few of their classics with new stuff.

And then it was time for Dave Matthews Band. I really wanted to leave, but the Joker and Change100 wanted to see him. Before I flew to Denver I tried to persuade the Joker to throw a huge party at his house on Sunday night so we could skip Dave Matthews and rage instead. Alas, I got stuck at Dave in the back with a bevy of drunken frat boys and chatty high school girls on their cell phones. Luckily everyone had the munchies and I convinced the crew to seek out donuts and other snacks instead.

We discovered that there was a fire sale for food. Meatball subs for $2? Unreal. I was stuffed but ate one anyway. What a sick deal. They also had massive ice cream cones for $1.

We went back to the same spot we hung out for Tom Petty from the night before and caught the rest of the set. Joker is a closet Dave Matthews fan because he knew the names to all of the songs. I kept giving him guff over that. I was super happy to finally leave and we skipped the last two tunes.

Overall, the music festival was average. Nothing special. The highlights were Grace Potter, New Mastersounds, and Spoon.
Posted by Pauly at 4:20 AM

I was wondering how the joker knew the names of all those songs...

hey, hes playing the same shit since 1996, so its easy to know the songs. and the frat daddys next to me know the new ones. dave started out cool in 1994...plus i got laid cause i could play those songs on guitar, so stop the hatin...hehe

Free ringtones for everyone.
Unique ringtone. Ringtones are attractive. Ringtones have nice melodies. Ringtones fun. Latest ringtone 2018. Do you have your favorite ringtone on your mobile phone? Want to change the ringtone? You can view my homepage for more references and search for other ringtones and leave a review for me here:https://ringtonesmobile.net/