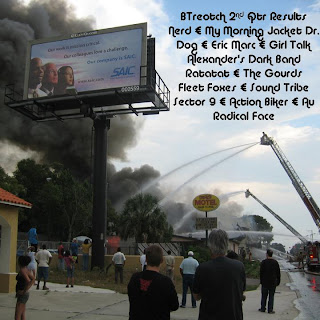 As my trusty Toyota Tacoma was taking me south on I-75, I noticed a thick plume of black smoke arising near my exit. There's another six miles from the highway to my house - a straight shot down Hillsborough Avenue - in between are several businesses and I figured some plastic company had gone up in flames. But as I continued down Hillsborough, passing the Hard Rock Casino (which probably deserves to be be set aflame), past the industrial areas , past the 24 hour porno store, past We Finance Everyone used car lot - I did not pass the fire, and it looked as though the smoke was shooting straight from my neighborhood. I was listening to Dr Dog's newest album Fate, an excellent album which at times can be down right chilling - this only intensified my growing anxiety of finding out what exactly was burn, burn, burning. I gave my wife a call - no answer. As I turned onto a side street, just a few blocks from my house the smoke seemed to be coming from my neck of the woods. Seminole Heights is one of those neighborhoods with an eclectic mix of people - you may see a rainbow flag on a porch next to a house with a few rottweilers turning grass into dirt. The houses are early 20th century bungalows with tons of charm surrounded by some gorgeous trees providing quality shade. I don't want to lose those trees. Taking a left onto my road, the smoke was now taking over the neighborhood, I couldn't see where the fire was coming from, but I now knew it wasn't MY HOUSE. I pulled in my driveway ran inside to grab my camera and took off around the corner to find the local hardware store - a pre World War 2 business just a long fly ball from my house - going up in flames. The business was family owned and old school - they still didn't use a computer. As sad as that was, the fire was epic - that kind of chaos reminds us that shit can get out of control very quickly.

Evil Urges, My Morning Jacket's third release, is a fire - a funk filled rock album - that will roast (see Evil Urges, Highly Suspicous, Aluminum Park) then smoke you out (see Smokin' from Shootin, Touch Me I'm Going to Scream). Girl Talk, whether or not you think he is a DJ (he's not) and whether you think was he does is music (it is), makes some of the funnest and funny dance tracks I've heard in ages. Ratatat is producing highly original takes on electronic dance music. What makes them stick out is their approach to melody, guitarist Mike Stroud has such a cool tone and unique style, it sounds like a completely new instrument. Upon first listen, I thought the Fleet Foxes were a bastard son of Band of Horses and My Morning Jacket, but after more listens I think that sells them short. Their excellent harmonies, often haunting, and stripped down songwriting sounds like a avant garde facelift to mountain music.
download here

seriously, that was the funniest thing...smack dab in the middle of the tunes, just like a Btreotch would do it!

you had to put an MMJ song on here didn't you?

album of the year so far.. even though Librarian = gag reflex