There were many great Bonnaroo stories! I don't know where to start!! I never wanted to leave.

I think even you would have enjoyed the Dave Matthews show. They were amazing - and no humping teenagers this time. Robert Randolph came out for a couple of songs (watchtower was INSANE!!!) and Warren Haynes played one song i think. but wow - the whole weekend was just one great show after another. I didn't see a bad show the whole time.

Some fun highlights: during Jack Johnson, people started climbing a HUGE tree. One guy got up to the very top and jack gave him a shout out and when he started to climb higher jack was like - "Hey man you've already impressed us, don't hurt yourself!"

It made me incredibly nervous - it was raining and things were kicking in if you know what I mean. But it all turned out ok as far as I know!

Sunday - we walked into the concert area for the last time and suddenly, a completely naked man (except for his shoes) started running around waving his shorts in the air. OK, at first this doesn't sound hilarious, but a cameraman was running w/ him and filming him. The guy was fast! he eventually outran the cameraman!! But to see that camera try to keep up with a really fast naked guy was hilarious!!! When he finally outran the cameraman he got many cheers from the crowd.

Number one wierdest thing that REALLY happened: my friends and I saw a wild animal give birth. seriously. This was right after we woke up and none of us were in an altered state, so I know it really happened! Apparently it was a 'vol'? An animal that is a little bigger than a field mouse. Anyway, it was right between two tents and we were like "Awwww, isn't it cute!"

Tracy said, "Hey let's give it some food!"

And I said - no because it will keep coming back. Then she looked at it more closely and saw something coming out of it. Euuuwww - I know. Then it started walking away and we realized it was giving birth to a baby 'vol'. Oh my God. People were freaking out. It walked off, giving birth, under one of the tents! The girl who was sleeping in that tent was not happy! She told it to go away - that she couldn't promise she wouldn't roll on top of it in the middle of the night and break its neck! We never saw the mother and baby again. I promise, it really happened.

I never imagined that every band would be completely amazing. I have seen a lot of them before, but to see all of them play incredible shows all in the same weekend was mind blowing.

Alison Krauss - perfection. The guy who sang for Clooney's character in "O brother..." came out for a couple of songs and that was great and a lot of fun. It was so hot during this show that it was nice just to sit in the grass and relax.

Allmann Brothers - how have I lived my whole life loving this band and NEVER seen them until now? they blew my mind! Great songs - lots of surprises - Franklin's Tower cover - how can you go wrong? I was speechless.

Dave Matthews - fabulous. I would almost go see them at riverbend again after that show. ALMOST!

WIDESPREAD PANIC!!!!!! Definitely my favorite Saturday show. Somehow I had room to dance and nobody got in my way. Some of my friends were sitting down. Too many party favors if you know what I mean. No way. I shook it the whole time. They were awesome! I have got to hit another Panic show this summer for sure.

Trey Anastasio band - I have already seen Trey 2 times this summer and of course, he was playing a lot of the same stuff. But it was still good. By that time in the night we were all exhausted and actually started walking back during his show. So we missed bo bice on stage, but did hear 'Panama' while we were in line at the portapotties. That was the night I dropped my jacket on the floor of one and had to throw it out. Only casualty of the weekend!

We also saw another band during Trey - someone was playing flute (which is my instrument) so of course I enjoyed that! Not sure of the name... I could go on and on!

Yonder Mountain - start to finish - GREAT SHOW! They did a cover of the Beatles 'Dear Prudence' which is one of my all time favorite Beatles tunes. It was excellent!

Jack Johnson surprised me and put on a fabulous show and besides the tree climbers making me nervous, it was quite enjoyable!

My Morning Jacket - great! They had all of these huge characters on the stage and at one point one of my friends was like - "Oh my god - is that a giraffe?" And sure enough, it was!

The Word with Robert Randolph - that man is amazing!

Oh and Bob Weir with Ratdog! So many Dead songs - I was pleasantly surprised. They were very good.

Black Crowes - Who knew that they rocked the live show? Not me! They were really great. And Chris Robinson is one sexy m.f. on stage!

I am leaving out some things - like Galactic on friday night - great time, the Shackshakers on Thursday night - so much fun, the Mr. T float carrying Bo Bice..... 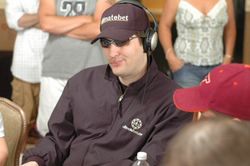 I bumped into Phil Hellmuth a few minutes before the John Bonetti roast here at the Rio. Phil is a tough guy to get one-on-one time with. I was going to ask a few other players before Phil, but since he was their, I siezed the moment. I got up the courage and said, "Fuck it!" and stopped Phil

I asked for an interview. He seemed uninterested. I told him it was just a single question interview, specifically, "What's on you iPod?"

He was about to walk away and stopped in his tracks and perked up.

He told me that his 15 year-old son uploaded a lot of rap and hip hop onto his iPod. He likes 1980s music and said he enjoyed some of the rap. I thought he was fucking with me but he insisted that he dug it. He also said he purchases the "Top 100 Songs" from iTunes so he can figure out what people like these days. 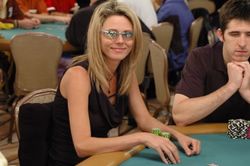 Greetings from Las Vegas. I've been hard at work covering the 2005 World Series of Poker.

I'll be posting a new feature on my blogs called: WSOP iPod. A lot of poker players listen to music while at the table, especially during lengthy tournaments. I decided that I was going to ask different pros what they were listening to.

First up is Clonie Gowen. When I asked her about her iPod two days ago, she said she didn't own one. The one I saw her with was borrowed her boyfriend. However, she assured me that she was going to buy one the very next day. Sure enough when I spotted her on Wednesday, she had her brand new iPod... pink of course. I tracked her down and asked her to tell me what show me what she was listening to. She likes to listen to a lot of oldies.

Check back soon for the next installment of WSOP iPod.
Posted by Pauly at 4:20 AM No comments:

I'm moving to Las Vegas for two months for work. I'm covering the World Series of Poker for a bunch of different websites and organizations, including Lasvegasvegas.com, Poker Player Newspaper, and Fox Sports. Here's an article that I wrote for Fox Sports called Who's Next? Sorting out WSOP favorties...

Anyway, I'm pumped to live in Vegas. The downside is that I won't be psoting as much as I'd like to over the next few months. But stay tuned for some great posts from our other contributors!
Posted by Pauly at 4:20 PM No comments: