Krautrock: Tony Conrad with Faust, Outside the Dream Syndicate (1973) 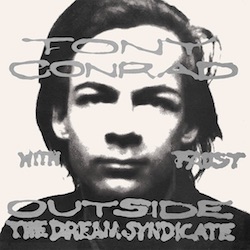 Faust, the band from Wümme in northern Germany outside of Hamburg, is one of a handful of Krautrock acts invariably named whenever the genre is considered.

We’ll discuss the curious circumstances of their formation and initial marketing soon enough when the time arrives to consider the four Faust LPs included among Julian Cope’s list of “50 Kosmische Classics.” Today Faust gets to make an early, cameo appearance in our survey, though, as part of a discussion of one other record on which they appeared, one for which they played a supporting role to Tony Conrad, the avant-garde filmmaker, musical and artist from New Hampshire.

As a filmmaker and later video artist, Conrad earned significant renown for his various formal experiments during the 1960s and after. His first film, The Flicker (1966), consists primarily of just solid black and white frames alternating in an intermittent sequence for a half-hour. Some walked out of screenings, while others endured headaches or nausea (take a look at excerpts on YouTube, if you dare).

Other Conrad experiments in cinema included Yellow Movies (1972-73), actually patches of emulsion painted directly on walls inside of painted frames, with the emulsion subsequently reacting (very slowly) over time, and Pickled Film (1974) which involved stuffing film in bottles of vinegar and showing it that way (and not through a projector).

Conrad passed away at 76 almost a year ago, and not long after his death came the release of an acclaimed documentary Tony Conrad: Completely in the Present. The trailer gives you a further idea of his personality and artistic envelope-pushing (while also featuring music from today's album):

Conrad made a lot of music during his life as well, including belonging to a famous ensemble of experimental musicians known as the Theatre of Eternal Music, a.k.a. the Dream Syndicate. The group included important figures like La Monte Young, Jon Hassell, Angus MacLise, and John Cale, and tended largely toward minimalism and drone music. In other words, as with film, Conrad frequently challenged formal boundaries in music as well.

Speaking of Cale, Conrad played an important role in the Velvet Underground’s backstory, and in fact with Cale and Lou Reed played in the Primitives, the pre-VU band that only lasted long enough to make one single in 1964. Conrad is in fact credited with having indirectly inspired the name of Reed and Cale’s famous band, the pair having once visited his New York City apartment where Conrad had laying around a copy of Michael Leigh’s 1963 book about sexual perversion, The Velvet Underground.

During the middle-to-late ’60s Cale oversaw a series of recordings titled “Inside the Dream Syndicate” featuring the collective. The title of Conrad’s 1973 collaboration with Faust thereby casts the LP as a kind of companion work.

The record came about after a chance meeting in New York between Conrad and a filmmaker from Hamburg. The filmmaker knew Uwe Nettelbeck, Faust’s producer, and suggested he might be interested as well in Conrad’s music. Conrad flew to Germany and met Nettelbeck who took him to a farmhouse.

“It was these people Faust,” Conrad later explained in an interview. “They had been, to some substantial degree, incarcerated in this farmhouse for months, and they had their partners and sexual liaisons and different social complexities enacted on a long-term basis within this farmhouse. It was a microcosm, where everything seemed to have been evolving in some strange way over the course of months and months.”

By then Faust had recorded its first two records (Faust and Faust So Far) and were in the midst of a process that would result in their next (and best) two LPs appearing in 1973 (The Faust Tapes and Faust IV).

“It was no wonder that they really didn't really have a lot of involvement with me,” said Conrad of the group. ”But Uwe said that they wanted to do stuff too, so we did one that was my style, and one that was more like a rock 'n' roll style. That's how there's two sides.”

Conrad refers to the two side-long tracks that comprised the original LP, culled from three days’ worth of recording at the farmhouse. Conrad plays violin along with Faust’s Werner Diermaier (drums), Jean Hervé Péron (bass), and Rudolf Sosna (guitar/keyboards).

The song on Side 1, a 27-minute long experiment titled “From the Side Of Man And WomanKind,” is the one Conrad refers to as “my style.”

“I basically said, ‘Keep an even beat going through the whole thing,’ which is almost impossible,” explained Conrad. The track is a remarkable feat of discipline, the Faust members keeping time and never wavering from their metronome-like march while Conrad’s violin drones overhead. Kind of like The Flicker, it’s a disorienting piece. Some will find it maddening, while others might be tempted to dismiss it as joke art. Meanwhile there are those who sincerely regard it as a powerful, utterly absorbing track.

Side 2, “From The Side of the Machines,” lasts nearly as long, but features a generally lighter mood. It’s a more dynamic piece, though is still carefully circumscribed within relatively tight parameters of rhythm and melody. The intensity increases as it goes, becoming almost menacing at times. Sosna’s keyboard surfaces about halfway through, mostly mimicking Conrad’s drones while covering everything over with a kind of soft-focus psychedelic patina.

(Bonus tracks of varying length from the same sessions appear on subsequent reissues but don’t introduce anything particularly distinct.)

Some describe Outside the Dream Syndicate as “meditative” or “hypnotic,” but that’s not the case for me at all. The record just keeps aggressively demanding our attention, forcing us back time and again to focus on the mechanics of the performance.

This is one of those records that reminds me of Brian Eno’s quote: “Avant-garde music is sort of research music. You’re glad someone’s done it but you don’t necessarily want to listen to it.”

Even so, like some of Conrad’s hard-to-watch films, Outside the Dream Syndicate is often held up as a signal work in minimalism, drone music, and the eclectic Krautrock genre. Check it out, if you dare.

Posted by Short-Stacked Shamus at 9:20 AM 12 comments: 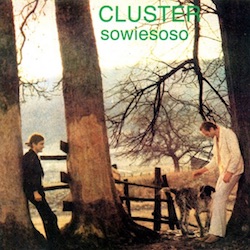 Posted by Short-Stacked Shamus at 11:41 AM 3 comments: