More hula hoop vids! Katie Sunshine is getting down to Woman's a Devil by Goldfish.

I enjoyed this documentary about reggae music and the history of music in Jamaica.

Panic rocking a cover of Fire on the Mountain....

Grisman and Garcia: So What

Today is David Grisman's birthday. Here's Grisman and Jerry Garcia plucking away at a cover of Miles Davis' So What...

Bruce Springsteen is at his finest during Rosalita. Perfect song to get you fired up on this dreary Monday.


Thanks to The Daily Vinyl for spinning the Springsteen record.
Posted by Pauly at 4:20 AM No comments:

I love stumbling upon old black and white jazz videos. Here's one that I'd like to share with Bill Evans trio (with Chuck Israel on bass and Larry Bunker on drums) live in London in March of 1965.


If you dig this genre of music, check out this jazz playlist I created that I usually write to every morning.
Posted by Pauly at 4:20 AM No comments: 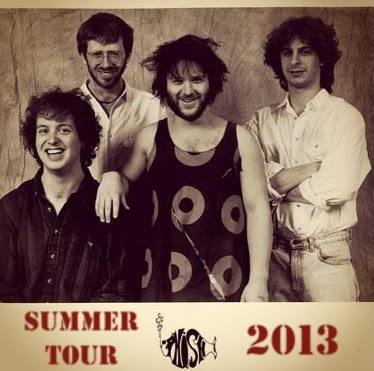 The day has arrived. Load up the bus. Call a sitter. Start rolling those doobies. The Phish are back on tour. For a west coaster, I'm pumped. this has 8 shows on the West Coast and the usual Dick's run in Colorado, not to mention a stopover in Canada.

For setlists, just click on the individual show links. 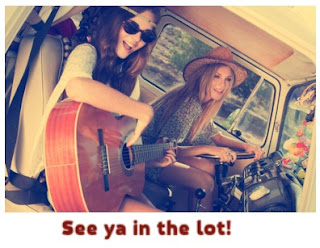 Steely Dan was Phish for their era (minus the harmonies and the Quaaludes). Donald Fagen and his crew at Steely Dan give us a good way to kick off this Monday morning.


Thanks for our friends at The Daily Vinyl for spinning this record for us.
Posted by Pauly at 4:20 AM 2 comments:

This originally appeared on Tao of Pauly. 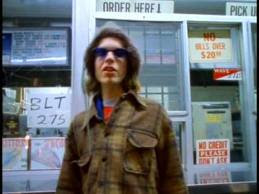 Time flies. Twenty years ago, Beck hit the mainstream with Loser. Grantland posted a good piece Choking on the Splinters, which analyzed Beck's career on the 20th anniversary of the release of the original Loser single.

Loser was blowing up. MTV aired the video at least once an hour (this was back when MTV aired videos 20 hours out of the day). Every radio station had Loser it in heavy rotation. It became an overnight hit months before. Beck recorded Loser in 1991 as a bad inside joke among friends and he treated it more of a throwaway song. Yet one man's trash is another man's art. Bong Load, the indie label that produced Beck's record, released Loser as a single. One local DJ started playing it and that sparked what would become a raging inferno. Although Beck was on the radio or MTV all the time at the end of 1993, we had to wait until early 1994 to buy the new Beck album (his third), Mellow Gold, which included Loser as first track.

The massive machine of consumption gobbled up Loser and spit back out again and again and again and again and made a ton of dough in the process. At my first Beck show in 1994, after every song a drunken moron shouted, "Play Loser!" Beck did not play it during his set, but at the end of the show for the encore, Beck pulled out a boombox and put in a tape (or CD) and blasted Loser, while he nodded his head and gazed at the stunned crowd.

Music critics and the gatekeepers of the establishment pegged Beck as a spoiled brat. You could tell Beck was embarrassed at Loser's success more than trying to stick it to the fans. Besides, it's a tough song to play live because of all the loops and samples. Stiff white squares in suits tried to peg Beck's Loser as the slacker anthem. The older generations used Loser as the perfect example why Generation X were a worthless bunch of stoned and ambition-less losers who overdosed on pop culture and brand bombardment.

A couple of music geeks tried to say Beck was the Bob Dylan of Generation X. Kurt Cobain had (supposedly) just blown his head off, so it was up to Beck to carry the musical torch for Gen X. It was a ridiculous comparison. Beck was talented, certainly more talented than his peers, but he was no Bob Dylan.

I don't recall much about One Foot In the Grave, the album between Mellow Gold and Odelay. But I listened to Odelay to death. I lived in Brooklyn in 1996 and threw a birthday party at my brownstone. We blasted Odelay all night long and played it nonstop on a continuous cycle while thirty people danced in my kitchen and we drank cans of MGD and ate mushrooms with peanut butter and Ritz crackers. The entire album clocked in under 55 minutes, but it was a rager from the first note on the opening track of Devil's Haircut, to the catchy "two turntables and a microphone" bit from Where It's At, to the "hidden track" of computer-blips at the end that freaked out everyone who was shroomin'. A bunch of friends had not heard the album (maybe just heard Devil's Haircut, but that was about it) and they were blown away by hooks, samples, loops, lyrics, and hokey country funk. The one girl I was crushing on the most had shown up to my party. I impressed her with my musical tastes, particularly Odelay. She loved it and begged me to make her a copy. I was trying to be cool and wait three days to call her, but I was going apeshit and gave in on day two because I was afraid she was going to go out and buy it. In the end, Beck's Odelay got me laid, which is why it's one of my Top 10 all-time albums.

Listen to Odelay and the full album here:


I lost track of Beck when I moved to Seattle in 1997 and then got lost into a bunch of different music. It wasn't until a couple years later when I befriended the Joker, who turned me onto the three albums I missed (Mutations, Midnight Vultures, and Sea Change). We listened to a ton of Beck while on Phish tour in the summer of 2004. I was back on the Beck train and I couldn't wait to get my hands on his next two albums -- Guero and The Information. I listened to both nonstop when I lived in Las Vegas, and both were perfect driving music or background music when I played online poker.

When I moved to Los Angeles in 2007-08, I had a developed a new-found respect for Beck as I slowly adapted to my new home. Living in L.A. gave me a chance to soak up all of the random local references Beck slipped into lyrics throughout his entire career. I remember the day when I was driving on the freeway with my girlfriend and finally understood all the lyrics to Debra (by the way Zankou Chicken fucking rocks). It was like a moment of clarity hitting you in the junk.

With the Guero album, Beck made music that was accessible to more people by dropping Spanish slang and Spanglish (a fused mixture of English and Spanish). Los Angeles' diversity became a cultural ingredient and component to almost every Beck album (especially Guero and its Spanglish blend).

A couple of years ago, I caught Beck on the festival circuit when he played at Vegoose and Bonnaroo. Beck's sets were among the highlights of both festivals. He put on a true show with lots of busy shit going on stage. Beck had an outdoors boy scouts theme. It was part performance art, part Vaudeville. He even paid one guy to run in place most of the show. He also had a puppet show at Bonnaroo... sort of. The band did a short film with the puppets (poking fun at hippies), which aired before Beck took the stage.


A couple of years ago, Beck spearheaded a cool project in which he and friends covered entire albums in a single jam session. Most of it was super loose and weird as fuck, but hey, it's what Beck wanted to do at the time. He was having fun and paying homage to musicians who inspired him the most.

Beck is a Scientologist, which is just way to sketchy for my tastes. I don't know much about his personal life and don't care much. It's not like he's jumping up and down on Oprah's couch. Funny thing is that Beck might have been one of the original hipsters. He dressed pretty fucking rad for 1993. That was the pinnacle of grunge and everyone wore ripped jeans and flannel, but Beck had a unique style... retro-cowboy meets 70s pimp. These days every fucking dweeb in Silver Lake or Williamsburg dresses like Beck did in the 90s.

It's 2013 and Beck embraced more avant-garde hijinks like releasing his new album as sheet music, so it is up to his fans to figure out how the record goes. I'm sure his record label was thrilled with that idea. That's the kind of artsy stuff that give suits ulcers, but it's the kind of innovation that reminds everyone why Beck is, and always will be cutting edge.

Time fucking flies. Seems like just yesterday that Beck's Loser hit the airwaves. Man, was it really twenty years ago?
Posted by Pauly at 1:11 AM 2 comments:

Email ThisBlogThis!Share to TwitterShare to FacebookShare to Pinterest
Labels: Beck

I couldn't sleep, so I spliced together a 2001 video. Here is a little footage from Kubrick's 2001: A Space Odyssey with an accompanying soundtrack of Phish's 2001 from the Island Tour (1998).

Things really get cooking at the 7 minute mark...


Watch this video ASAP before the YouTube police takes it down.
Posted by Pauly at 2:22 AM No comments:

Email ThisBlogThis!Share to TwitterShare to FacebookShare to Pinterest
Labels: 2001, Phish

Spring is almost upon us. Katie Sunshine is back with a video she recorded while hooping in the snow and getting down to MGMT's Electric Feel.

More Hoopsie Daisy here.
Posted by Pauly at 4:20 AM No comments:

Thanks to the Joker for suggesting this week's key bump. It's a Flight Facilities Edit of Paul Simon's You Can Call Me Al...


Feel free to download the You Can Call Me Al track via soundcloud.
Posted by Pauly at 4:20 AM 1 comment:

I posted an Alien Abduction video the other day with a dubstep soundtrack. I snagged the video and replaced the audio with Phish, specifically Sand from 6.29.2009 Camden, NJ. Warning this is a pretty intense animated video depicting so-called real life abduction stories (and in the last minute of the video, there are actual drawings from kids claimed to have been abducted). If you get freaked out by little grey men or disturbing images of alien vaginal probes, then you might want to pass on this video.

What is better than an over-the-hill Britney Spears auto-tuning singing Toxic? How about cute girls with acoustic guitars covering Toxic?

Rachel Wong's rendition of Toxic is a doozy...


Kendra Dickerson looks like a girl you'll see slinging veggie burritos in the lot. Here's her faded-Xannie version of Toxic...


The best version I found is by Romaine Dee, a breezy blonde who just sings and does not play guitar, but it's so good I had to share it with you...