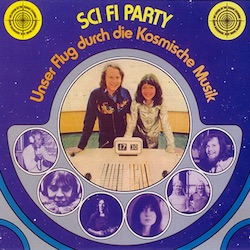 That’s also the year of Sci-Fi Party, the fourth of five LPs by the Krautrock “supergroup” the Cosmic Jokers. In fact all five of the Jokers’ albums were released in 1974, and all five are also included among Julian Cope’s “50 Kosmische Classics.”

We’ve covered the Jokers, not so much a “group” per se but rather a collection of musicians who performed solo or in other outfits whose acid party jams were surreptitiously recorded and released without their knowledge or permission by Rolf-Ulrich Kaiser and Gille Lettmann for their Kosmische Musik label.

This release continues the couple’s commercial conniving, in this case stitching together lightly remixed excerpts from other Cosmic Jokers releases along with additional material from Ash Ra Tempel, Walter Wegmüller, and Wallenstein. The approach is similar to the one employed with other Jokers releases, themselves the result of live performances later edited into the side-long suites found on each disc.

In other words, this one is kind of a “best of,” and perhaps uncoincidentally probably rates as my fave of the five despite its uncertain categorical status. Unlike Cope who sees fit to keep all five Cosmic Jokers LPs on his list, I would probably have stuck with this one only while recommending further exploration to those so inclined.

“Im Reich der Magier” (taken from the self-titled first LP) provides the record a soft, comfortable lift off with Kaiser and Lettmann’s occasional, whispered voice-overs functioning as earnest-though-unobtrusive announcements from the cockpit.

Having reached cruising level, “Der Herrscher” from Wegmüller’s fantastic double-LP Tarot (the penultimate entry on Cope’s list) provides a tasty in-flight snack -- a rock riff paired with Wegmüller’s echoed mystical musings. “The Cosmic Couriers Meet South Philly Willy” (from Wallenstein’s superb 1973 LP Cosmic Century) then melodically rounds out the side, supplying some of the most conventional sounding prog rock to appear on any Jokers disc.

Side Two starts with a couple of short, spacey excerpts from “Kinder Des Alls” (Side 1 of Galactic Supermarket), deftly divided by “The Electronic Scene” inserted here after being lifted from the fifth and last Jokers’ LP Gilles Zeitschiff.

“It is the new Science Fiction,” say the liner notes, describing the “Flight through the Cosmic Music” contained within as “a delight of colours, flashes of lightning, and sound of electrons.”

That might be a stretch, but it isn’t a bad starter sampler for anyone interested in either the Cosmic Jokers in particular or Krautrock in general.