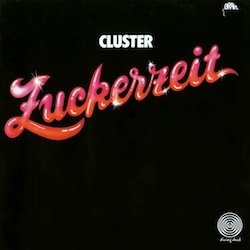 Along with Tangerine Dream and Klaus Schulze (both of whom appear with entries among Julian Cope’s “50 Kosmische Classics”), Cluster is part of the so-called “Berlin school” of electronic music also regarded as an important Krautrock offshoot (or interloper, depending on your point of view).

Dieter Moebius and Hans-Joachim Roedelius’s variety of “space music,” much of which might be classified also as “ambient” or “thinking” music, would directly influence some of Brian Eno’s later experiments, as well as David Bowie’s collaborations with Eno later in the decade. In fact, Eno was in the middle of collaborating with Cluster on two full-length LPs at the time he began working with Bowie on his famed “Berlin” trilogy (Low, “Heroes,” Lodger).

Cluster’s third album Zuckerzeit detours from the duo’s first two records (and the three Kluster LPs that came before), offering a more accessible variety of proto-“synth pop” instrumentals with a greater emphasis on melody and rhythm. The title means “sugar time,” and with Michael Rother of Harmonia helping with production, the sweeter sound contrasts sharply with the darker moods of the earlier discs.

“Hollywood” is an absorbing opener, immediately rewarding the listener for having set the needle down with a groovy, mellow march. “Caramel” similarly employs programmed percussion while cycling through a slightly more zealous-sounding loop, though the mood remains light.

That track segues directly into “Rote Riki,” a lengthy collection of electronic buzzes and chirps underpinned by a kind of equestrian-flavored clip-clop percussion (kind of a distant precursor to the goofy “Die Bunge” from Cluser & Eno). “Rosa” then completes the first side with an echoey synth exercise similar to some Kraftwerk and Harmonia.

The second side opens with “Caramba,” another track featuring a repetitive rhythm hammered out on overlapping keyboards. “Fotschi Tong” follows, giving the drum machine prominence while the duo dance up and down the synth in a somewhat claustrophobic way. “James” then incorporates plodding multi-tracked guitars and bass in a manner that might suggest a kind of 25th-century John Lee Hooker if you cup your ears just right.

“Marzipan” is another bite-sized confection, featuring still more synth noodles tangling with each other. The slight “Rotor” likewise aims for cuteness amid mechanized monotony. Finally the short “Heiße Lippen” saves things by reprising the cool formula “Hollywood” in a merry, head-bobbing way.

This record starts promisingly for me but trails off, with most of the latter tracks sounding a little too much like inconclusive dabbling with available machinery for my tastes (“Heiße Lippen” being the exception). I mean, I have a sweet tooth and love candy as much as anyone else who does -- but you can’t make a meal out of it.

I’ll grant the record’s historical significance. I’ll even argue that the best tracks here challenge contemporaries like Kraftwerk, Neu!, and Harmonia while variously prefiguring the work of later artists like Four Tet, Autechre, Boards of Canada, Bill Nelson, Air, and -- most importantly -- the Eno of Another Green World and certain other ambient outings.

But for the most part I tend to agree with Julian Cope’s assessment that “the whole album seems like merely snatches of some passing car’s stereo turned up full.” See what you think: 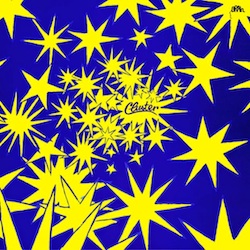 As noted at the start of this series, the category of “Krautrock” is hardly homogeneous. Rather it includes a wide variety of wholly dissimilar artists, many of whom didn’t even care that much to be thought of as belonging to a musical movement (let alone one named after an epithet).

In any case, within the Krautrock kaleidoscope there’s a subcategory of electronic and/or synth-based music such as represented by groups like Tangerine Dream, Kraftwerk, Cluster, and others. Some prefer to carve these mechanized maestros away and set them outside the Krautrock circle, keeping bands that tend to feature (mostly) prog-rock instrumentation like Amon Düül, Can, Faust, and Neu! positioned at the center.

I’m not one to fuss too greatly over where the lines are drawn, usually inclined instead just to consider as Krautrock just about any music made in Germany during the late 1960s and 1970s that cannot readily be described as “Schlager” -- that is, the inoffensive, lightweight pop that often filled the German charts during those years.

Many Krautrock acts had a dim view of Schlager, thinking of it as mindless and redundant, and were thereby motivated to shun the traditional forms and themes exhibited by it. And while some Krautrockers certainly absorbed Anglo and American influences (blues, rock, jazz), others very deliberately eschewed those influences as well, wanting to create something entirely new and seemingly untouched by other influences.

Worth noting here as well was the country’s troubled, horrific political history which for many young adults discouraged any identification with their own nation’s past. Some of these artists pointed back to Germany’s “stunde null” or “hour zero,” a reference to the moment World War II concluded and the start of an entirely new Germany disconnected from its former Nazi-led state.

This idea of an absolute break with the past was sometimes reflected in the free-form, experimental music some of these acts created, with the electronic tradition being especially inviting given its relative newness and the lack of history or set of common practices. The band Cluster -- essentially the duo of Dieter Moebius and Hans-Joachim Roedelius -- is our first example of such technological trailblazers from Germany who helped shape the modern era of electronic music.

To step back just a bit, we should mention that pair’s earlier work with another important figure in German electronic music, Conrad Schnitzler, in a band similarly (and confusingly) named Kluster. First forming at the short-lived though influential and fertile Zodiac Arts club in Berlin, as a trio they made three LPs in short succession at the start of the ’70s, each of which is innovative and interesting.

All three Kluster LPs originally had very limited pressings (just 200 or 300 copies), though were reissued on CD in the 1990s and found their way online not long after that, making them much more accessible.

Schnitzler then moved on, leaving Moebius and Roedelius to start afresh as Cluster, with producer Conrad Plank initially listed as a new third member. The debut was released in 1971 by a label run by the Dutch electronics company Philips whose list of acts included early Kraftwerk plus an eclectic variety of pop and classical acts from around the world.

Cluster (or Cluster ’71, as it sometimes appears) features a more cinematic and expansive sound than is found on the sometimes claustrophobic Kluster LPs, its resonating waves smoothly progressing from one “scene” to the next in intuitive, logical-seeming ways. That the tracks are titled after their lengths (“15:33,” “7:38,” “21:17”) further underscores the tendency toward abstraction.

Cluster then signed with Brain Records of Hamburg run by a couple of artists & repertoire guys who’d defected from the popular Krautrock label Ohr. Though only active for five years, Brain would issue numerous Krautrock classics including releases by Neu!, Harmonia, Klaus Schulze, all Popol Vuh who all also appear among the “50 Kosmische Classics.”

For Cluster II, Moebius and Roedelius presented themselves as a duo with Plank being listed as a producer and earning co-writing credits for all six of the tracks.

The mechanical, ominous “Plas” kicks it off, sounding like a dark, disorienting ride through an underground mine shaft with the mix of sounds disorienting your sense of near and far. The almost 13-minute “Im Süden” follows, featuring distorted, menacing guitars marching through a repetitive though slowly evolving dirge that ultimately resolves into a quiet, industrial wasteland. The first side then ends with the short “Fur die Katz” (“for the cat”), a collage of effects, modulated guitars, and electronic purring.

The second side begins with the almost 15-minute “Live In Der Fabrik” (“live in the factory”) featuring a rapid rhythm that mimicks some sort of futuristic production line. “Georgel” follows, a spooky experiment with organ and tape manipulation. The noisy cacophony of “Nabitte” (“there you are”) then provides a rapid postlude.

There something remarkably stimulating -- both intellectually and emotionally -- about both the Kluster records and these early Cluster LPs. It’s all very different from the other Krautrock we’ve covered, and indeed different from much else happening at the time.

That’s the point, of course, although soon enough many other artists would start to cluster around Moebius and Roedelius and demonstrate their influence for many years to come. 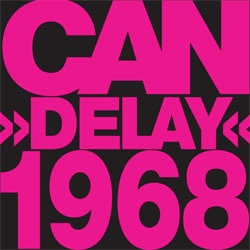 The fifth and final Can album Julian Cope includes among his “50 Kosmische Classics” is one I wouldn’t necessarily insist upon as a must listen for anyone other than the band’s most ardent fanatics.

Delay 1968 is an unreleased collection of tracks recorded prior to the band’s 1969 debut and released much later in 1981. Intended initially as the band’s first LP, labels shied away, causing Can to shift gears slightly and try again. Some of the record’s seven tracks surfaced here and there on bootlegs, with the best of the bunch -- “The Thief” -- getting an official release on a compilation in 1970.

The record further establishes Can’s reputation as proto-punksters while also elevating Malcolm Mooney’s importance both to early Can and suggesting even more of an influence by him over the “classic” Damo Suzuki-led lineup that followed his departure.

“Butterfly” opens with a grungy, droning sound that like other early Can points back to the Velvet Underground and ahead to Metal Box-era Public Image Limited. A modest organ stars during the first half of the tune, then percussion steps up for the latter half while Mooney chants about a dying butterfly.

“Pnoom” follows, a goofy bit of Beefheart-like sax squonking that got included in the band’s “Ethnological Forgery Series” of odd fragments. “Nineteen Century Man,” a suitably primitive-sounding jam with nonsense lyrics sounding vaguely accusatory (of a “nineteen [sic] century man” who is behind the times?).

“The Thief” ends the first side, the most melodic and pleasing track on the LP. Has a doom-laden vibe the urgency of which matches the singer’s lament (“why must I be the thief?”). Radiohead spotlighted its debt to Can with intense live performances of “The Thief” (one is included below).

The second side starts with a noisy one about a “Man Named Joe” that sounds excerpted from a longer jam. “Uphill” comes next, probably the most Velvet-sounding song on the record (that not incidentally sneaks in the adjective “velvet” multiple times modifying various nouns). Finally “Little Star of Bethlehem” recounts a strange, surreal meeting between two characters named Froggy and Toady.

There’s historical value here, but as I noted in the previous review I’m much more in favor of following Can’s story forward into its “late” era prog masterworks than to forage around too much back here before the beginning.