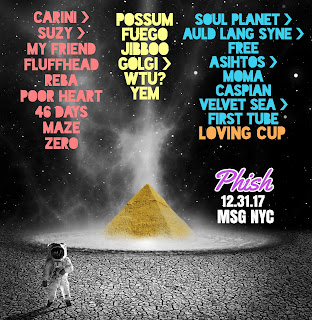 Phish completed their four-show holiday run at MSG with a NYE show. This also marked its 17th show at MSG in 2017.

What's the NYE gag? Tune into LivePhish for the webcast. 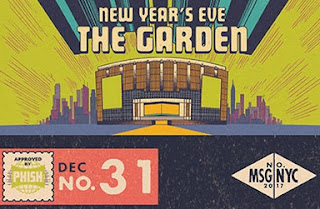 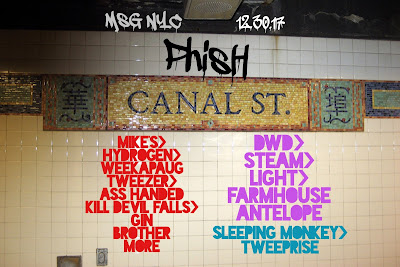 The third night of Phish this run and the 16th overall show at MSG this year.

The shows are webcast on LivePhish. If you're resourceful enough, you'll find someone with a mixlr feed. 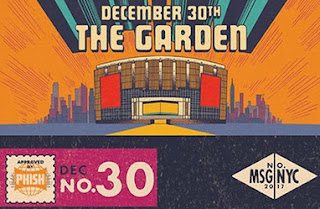 Talk about busting a nut. The night before NYE has historically been the big rager of holiday runs of Phishmas past. But hell...12/30 shows have always been a nutbuster (or "nuddt-bustahhh" as Providence friends say). And 12/30/17 lived up to the numerical hype... Mike's > Hydrogen > Weekapaug kicked off the festivities. H2 was one of a trio of MSG debuts not played at Baker's Dozen... Rare first-set Tweezer batted in the cleanup spot and clocked in at a bong-rattling 19 minutes. "Holy apetits Batman! 19-min Tweezahh?"... Fishman hijinks with Ass Handed... Smooth GIN packed in oodles of flavor into the 15-min blissful burrito... Brother bustout and second debut not played at BD... More setcloser and the tour wife @change100 caught me muttering to myself, "Talking to things not there again? What did the aliens tell you this time?"... Roamed hallways at setbreak. Found Javier and met up with old NYC friends G & G  (both lawyers on Long Island... always good to have Jewish attorneys on speed dial). G brought his wife OJ to her first-ever Phish show. "He's been going to see Phish for 20 years and I never went until now. I wish I went sooner. Phish is so much fun. It's amazing to see so many people without inhibitions and having a good time. I totally needed this."... Yup, truth from the insightful eyes of first-timer... DWD blasted off set 2. Phish harpooned the 28-min bloated space whale of a jam with a special spear-like weapon powered by pyramid crystals. Wildo pointed out "26 min DWD with 2 mins of WOOs!"... Steam got weird quickly and I got lost twice. I asked the wifey the fucking score during Steam at least twice... Light jam got cooking before Trey ripcord for Farmhouse... I told the guy next to me that "When I heard Farmhouse for the first time ever at MSG in 1997, I thought it was an obscure Bob Marley cover." And few mins later, he elbowed me with glee, "There's your Marley... BRAH!" during the No Woman No Cry teases... Sloppy, but ripping nonetheless Antelope slammed the door on the 5-song set. First two nights featured 6-song second sets... Sleeping Monkey > Tweeprise encore. Monkey was the third MSG debut not played at BD. I suspected a Loving Cup>Tweeprise double-dip, but the boys have been avoiding covers this holiday run.... 3 down and 1 more to go... Get ready for NYE.
Posted by Pauly at 4:20 PM 14 comments: 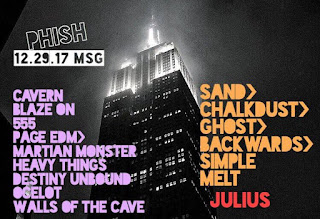 Phish returned to MSG for the 15th time thus year for their second night of a four nighter.

Here's what you missed on Friday night in NYC.... 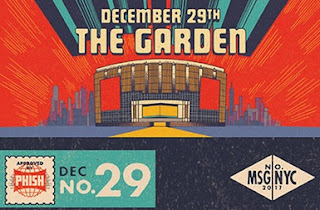 Went to show with Senor and his two brothers. First time all 3 of us at the same show since the late 90s. Senor gifted @change100 and I amazing seats (second row behind stage) and we hovered over Leo all night... Show kicked off with a rare Cavern opener... I fired up a fatty doob of Diesel during Blaze On... Gordo showed off his guns (and Pharells redonk pricey jeans) during 555... Saw Trey turn to Page and ask him, "Want to play Page EDM?" To which Page said, "Fuckyeahbigred! Beep beep, toot toot!"... First sighting of extreme weirdness arrived during Martian Monster... Destiny Unbound bustout. Only played twice in 2017, but both at MSG. Sick brag: I caught 11 out of the last 13 Destinys... I was not wearing the Ocelot shirt... Leo crushed Walls of the Cave en route to his MVP-performance... Six-song second set anchored by Sand... Chalkdust went cosmically deep clocking in at 21 mins... Short and sweet Ghost... Backwards was the red-headed stepchild of the second set... I doubted Phish could top the Simple from the Bakers Dozen, but they didn't try. Kept Simple rather... simple... Melt had been getting the first set treatment for much of 3.0, but the last two Melts at MSG were second set heaters... Understated Julius closed out the second night at MSG... Two down, two to go.
Posted by Pauly at 4:20 PM 17 comments: 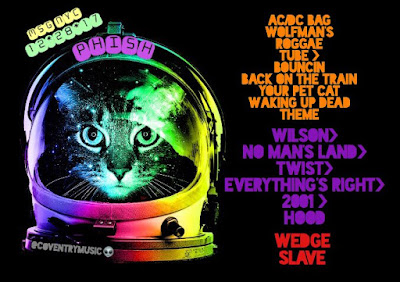 Phish returned to Madison Square Garden for a classic four-show holiday run to end the year. This particular New Years run will also mark 17 shows at MSG in 2017.

Here's what you missed on the opening night... 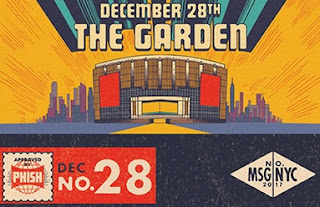 First show of the holidaze run... 14th overall at MSG in 2017... Shows on the 28th of DEC have been a mixed bag (historically speaking), yet the VT boys didn't phone this one in. It took a while to get locked in, but when they did, shit got real in the 6-song second set... The tour-wife flew in from LA where it was 77 degrees and she was semi-freaking out that temps in frigid NYC were like 7 degrees... Section 103 for the first show back... CK5 added/utilized another layer of lights to the ceiling and made the top of the Garden look like the underbelly of a mothership... Rusty first set, as expected. Eventually picked up the tempo... TUBE made it to at least 8-minutes! Bringin' da funk to shake da rust off... Waking Up Dead was my section's take a piss song. No joke like 63% of my section bounced... Wilson set 2 opener... Deep-deep space exploration during a 24-minute space-rager NMINML... I had two moments during the jam out when I asked change100 or my neighbors if Phish was still playing No Man's... Everything's Right is a cheesy burrito layered with cheese and dipped in cheese. I'm sure it was the party favors talking, but it annoyed me a lot less than some of the other fromage-laden new material. Killer moma-esque funk-out jam at end of Everything before the band dropped into 2001 formation. Thought Phish would save 2001 for NYE or Saturday night dance party... Elated Hood to end the set... Double-dip encore with Wedge and a sublime Slave... Phish played 3 of my Top 5 songs (Slave, Tube, and 2001) in the same show. I'd typically be thrilled to get 2 in the same night, but it was a sincere treat to get three favs on the opening night... One down, 3 to go.
Posted by Pauly at 4:20 PM 13 comments: