It's been a long year. Time to throw down for one last night of decadence.

Phish finished up their 4-night run with three sets on NYE. The show will be webcast via LivePhish.

Follow @CoventryMusic for in-show snark and updates (we promise we won't get as spun as last night).

Set 1: Don't Bogart That Joint, Your Pet Cat, Kill Devil Falls > Back on the Train > My Soul, Lawn Boy, Divided Sky, Ya Mar, Zero, Walls of the Cave 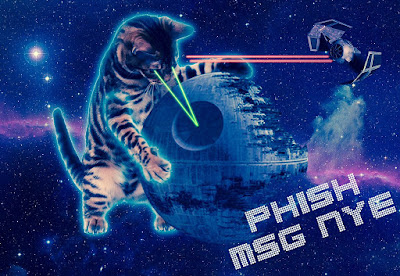 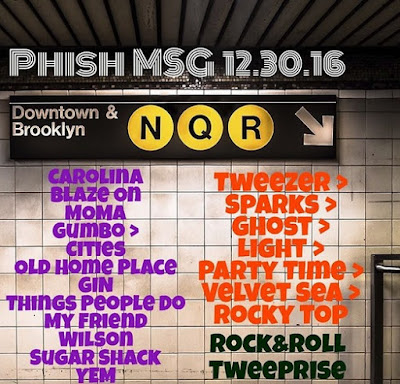 Night 3. Phish returned for the third show of a four-nighter at the most famous arena in the world. Watch the MSG show webcast via LivePhish.

In case you just woke up from a k-hole, here's what went down on Friday night at MSG.... 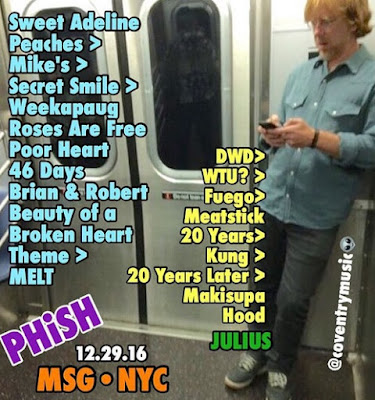 Phish returned to MSG for the second show of a 4-night run. These shows will be webcast on LivePhish.

Here's what you missed for night 2... 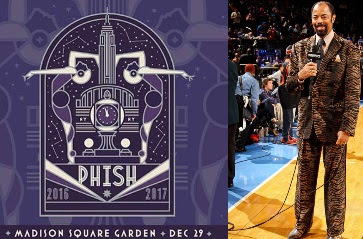 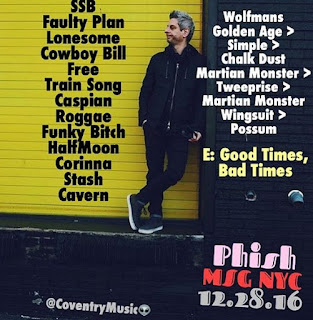 Phish returned to MSG for another 4-show run to end the year. This year they are kickin' old school with shows on the 28-29-30-31 instead of staggering the dates in previous years to incorporate a Jan 1st show.

The entire run will be webcast over at LivePhish.com. 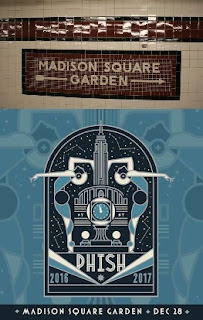 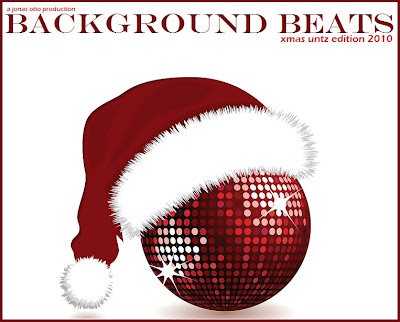 Need something that's Christmasy but kinda downtempo and funky? It's time to get down with the XMAS UNTZ and some Christmas Background Beats. It's the perfect background music for office parties, fun holiday gatherings, waiting in line at airports, or getting down and dirty with someone on a cold December night.

The Background Beats started as a series of mixes curated by Jonas Otto here on the blog. Six years ago, Jonas posted the original Background Beats: XMAS UNTZ Edition 2010. Three years ago, the Joker re-upped the mix. And now it's time to post it once again.

If you have any holiday parties coming up, make sure you download this mix. This special edition of Background Beats features DJ Matt J Loya who has made many incredible mixes over the years, but is especially talented in making Christmas mixes that are guaranteed be a big hit at any holiday party.

This mix is one long track, and unfortunately I do not have a track-list, however the mix brings the same downtempo, funky beats that the Background Beats series has always provided, only with a Christmas twist.

The tracklist is unknown, but it's one continuous mix that's roughly 74 minutes.
Posted by Pauly at 4:20 AM 1 comment:

Here's what she wrote:


After witnessing Phish's performance of this song in Las Vegas on October 29, 2016, and in light of the difficulty 2016 has brought with it, I was inspired to make this video to help make sense of it all. I hope it brings you some lightness. (continued...)

Thank you Trey Anastasio for writing such a powerful song, and thank you Phish for every note, every show, and every dance. The beautiful circus surrounding you is a testament to the joy you have given to all of us. My life is so much better because I've grown up as a phan. So lucky.

I looked for a website where anyone could go to volunteer and discovered volunteermatch.org. If anyone wants to do more, it's a great place to start.

"There is no darkness so dense, so menacing or so difficult that it cannot be overcome by light." 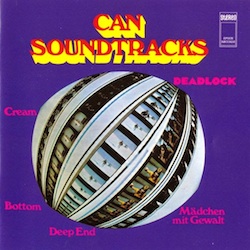 A few years ago a writer for The Guardian asked the musical question “Can: the ultimate soundtrack band?”

The article was occasioned by the appearance of a few Can songs on the soundtrack of the 2010 Japanese film Norwegian Wood to which Radiohead guitarist Jonny Greenwood contributed the film’s score. As it happens (the article notes), Can’s music had cropped up several times over the years in the movies, including in films by Wim Wenders and Pedro Almodovar.

In fact, the title of Can’s first album unsubtly evoked a certain variety of popular cinema -- Monster Movie. And it’s second LP was a compilation of early tracks that had actually been used in various German films (all quite obscure now), the collection suitably titled Soundtracks.

The record appeared after the band had parted ways with its original singer, the American Malcolm Mooney, replaced in 1970 by the Japanese-born Damo Suzuki. Suzuki is featured on five of the seven tracks, and Mooney the other two.

I mentioned last week Mooney’s status as a Syd Barrett-like figure in Can’s history thanks to his important role in the band’s initial development and his absence from the group during its later triumphs.

There was a touch of madness thrown in as well, with stories of Mooney acting erratically including one involving him repeating the same refrain from a song for three straight hours during a show -- even while the band took breaks and after it had finished for the night -- as though he’d worrisomely short-circuited.

Such stories got exaggerated later on, according to most, but in any case Mooney did make his way back to New York after parting ways with the group, and after a brief period Suzuki took his place (more on his introduction to Can later).

As you might guess, a record with seven tracks from five different films featuring two different lead singers is a bit disjointed, and a result Soundtracks sounds more like a brief detour between Monster Movie and the monumental Tago Mago that followed than a coherent whole.

The first three songs were all used in a spaghetti western, the first of which shares the film’s title, “Deadlock” -- a moody, electric dirge. “Tango Whiskyman” follows, a quieter, almost-folksy, softly-sung track with Velvet Underground-like percussion and noodling, followed by a short instrumental version of “Deadlock.”

Next is “Don’t Turn the Light on, Leave Me Alone,” a song that appears repeatedly in a mostly tame, mostly lame softcore comedy titled Cream - Schwabing Report (a.k.a. Secret Life of a Schoolgirl Wife). The tune is pleasant and rhythmic with a recurrent, descending chord progression -- not bad in the background, though doesn’t really demand close attention.

The first of the two Mooney tracks, “Soul Desert,” then rounds out the first side, taken from the thriller Mädchen... nur mit Gewalt, a.k.a. The Brutes. Just a brief bit of workmanlike faux-blues.

With metronome-like percussion, a simple and repetitive driving bass, a howling electric guitar constantly rising and falling, and Suzuki’s haunting vocal describing the the madness of “mother sky,” it’s a must-listen even for undergraduate Krautrock students, uniting as it does both meditation and mania in a fashion much explored subsequently by the genre’s greats (including Can).

The closer, “She Brings the Rain,” from the sci-fi flick Ein großer graublauer Vogel (English title: Bottom) provides a groovy coda to Mooney’s involvement with early Can, a smooth jazzy number that sounds like a different band entirely.

I personally would be more quick to think of later Can -- particular the post-Suzuki, often instrumental output -- when imagining them as a soundtrack band. And in fact, some would be more likely to pick out other Krautrock acts (Tangerine Dream springs to mind) as better known contributors to the silver screen.

But there is still certainly something unmistakably “cinematic” about this group -- there’s film in the Can.