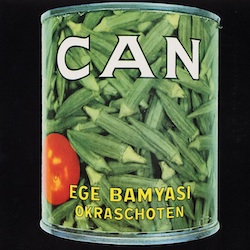 Ege Bamyasi is the fourth of five Can albums included among Julian Cope’s “50 Kosmische Classics,” the fifth (Delay 1968) being a compilation of unreleased material from the band’s “early” period.

Even the band’s most ardent fans forget (or ignore) the full title of this one -- “Ege Bamyasi Okraschoten.” They also either disagree or never bother to figure out how to pronounce it. As far as I’ve been able to tell, “bamyasi” is Turkish for okra while “ege” alludes to a company from Istanbul that among other things canned vegetables. Whatever you call it, “the one with a can of okra” deserves a spot near the top of any discerning listener’s Krautrock rankings.

Contrasting with the epic that preceded it (Tago Mago), Ege Bamyasi presents a (relatively) less freaky selection of seven accessible tracks, even producing a top 10 single in Germany. While lead singer Damo Suzuki would stick around for one more album before departing the group, Cope nonetheless regards Ege Bamyasi as “the only true Damo Suzuki/Can album” given the turn toward more instrumental, prog-like music subsequently produced by the band.

A short burst of feedback heralds the opening track, the nine-plus minute “Pinch.” It’s a highly funky, Electric Miles era-type groove over which Suzuki improvises nonsensical word associations (in English). “Sing Swan Song” follows, the sound of running water giving way to a soft, lullaby-like tune that gradually fades up to reveal what sounds a bit like an incantation amid its many layers of effects-laden guitars. By contrast, the driving “One More Night” closing out the first side features crisper-sounding clarity, with harmonics propelling the tune forward not unlike an Eno-era Talking Heads track.

Side Two begins with a moody number titled “Vitamin C” in which Suzuki enigmatically croons to someone about losing his or her vitamin C (a symbol for strength?). The track throbs along, giving bassist Holger Czukay lots of room to caper about, before finally resolving into the uncanny electronic warbling that becomes the next dish, the ten-plus minute “Soup.” After a few minutes of percussive head-bopping, “Soup” slips back into the avant-garde, with an extended sequence of weird chirrups, crashes, sirens, and shouting.

All is made nice again, though, with “I’m So Green,” a track whose super catchy, toe-tapping vibe evokes thoughts of a band of hipsters sneakily sauntering down some trippy sidewalk. The LP then concludes with “Spoon” -- the hit single -- which begins with metronome-like clicking over a vaguely Eastern sounding organ, then builds into yet another fun, trance-like slice of Krautrockin’ pop.

It’s “the closest to a pop LP that Can ever got” writes Cope, a record full of “clear cut songs with grooves of delightful melody and moment, plus a teen-appeal that still leaves me gasping with love for Damo Suzuki.” Partly for that reason, it’s the Can album I’ll often recommend as a starting place for those new to the group.

Sadly drummer Jaki Liebezeit passed away just last Sunday at age 78. In addition to serving as a core member of Can throughout its run, Liebezeit performed and recorded with numerous other acts over the decades including various side projects by Can members, Jah Wobble, and Michael Rother. He also notably helped percussively-push along the tiny, crowded canoe in Brian Eno’s “Backwater” from Before and After Science.

Here is a nice remembrance of Liebezeit from The Guardian detailing his achievements and remarking on Can's important place in the larger musical landscape.

Meanwhile, crack open this Can and enjoy:

Posted by Short-Stacked Shamus at 10:11 AM No comments: 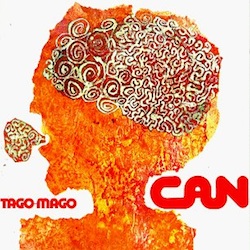 After original lead singer Malcolm Mooney’s abrupt departure from Can -- and from Germany -- in late 1969, the band continued without a frontman for about six months. Then in May 1970 Holger Czukay met Japanese singer Damo Suzuki performing outside a Munich cafe and invited him to perform with the group at a show that evening.

Soon enough they had a singer, and after recording a few songs with Suzuki that appeared on Soundtracks, they spent the latter part of the year recording in a castle near Cologne, ultimately emerging in early 1971 with their masterpiece of dark psychedelia, the double-LP Tago Mago.

“The music sounds only like itself,” says Julian Cope in Krautrocksampler. “It’s pointless to describe the music, but it’s huge free-rock, as though each member of Can has a field to play in.”

The seven tracks take up the 70-plus minutes, a couple of which occupy entire sides. Unlike what appears on Soundtracks (save “Mother Sky”), here Suzuki’s contributions often function like the addition of another instrument to a fusion-y ensemble, his low mumbles and energetic shouts ably augmenting an increasingly exploratory sound.

“Paperhouse” begins the record in somewhat plodding fashion, with Michael Karoli’s charming jingle-jangle strumming quickly encouraging the listener to nod along. A percusion-and-bass driven middle section suddenly accelerates things considerably before reprising the opening that in turn chorus-pedals the Can machine to the finish.

The apocalyptic and moody “Mushroom” follows (via a clever segue), one my favorite “classic” Can tracks and one that has been covered many times over, most notably by The Jesus and Mary Chain. Suzuki’s vocal conveys tangible dread, alternating between frightened whispers and urgent cries over an eerie soundbed culminating with an explosion. From the smoke and ashes fades up the next track, “Oh Yeah,” a repetitive, hypnotic exercise with backwards vocals and a tribal rhythm that will signal to Radiohead fans an important influence.

Side 2 is covered by “Halleluwah,” powered throughout by a melodious, funky groove with Jaki Liebezeit’s stuttering drum providing a determined backbeat crossing Moe Tucker with Jack DeJohnette. Suzuki’s improvised lyrics include references to the titles of other Tago Mago songs, and the sheer variety of sounds (many of which are likewise unscripted) emanating from the guitars, bass, keyboards, and occasional effects and edits together elevate the track to a kind of comprehensive encyclopedia of Can.

“Augmn” takes up Side 3, the title of which alludes to the meditative “om” and/or evokes the idea of a magic spell. The first two-thirds are a formless, electroacoustic imbroglio of various instruments over which keyboardist Irmin Schmidt moans through heavy reverb and echo. Then the last six minutes feature manic percussive work by Liebezeit careening headlong toward some secret inner space.

I was tempted to call “Augmn” the most experimental track of a double record full of experiments, although the 11-minute “Peking O” that begins the final side aggressively takes that title as a multi-part pastiche of noises and effects approaching “Revolution 9”-level weirdness. Finally the short “Bring Me Coffee or Tea” serves as a mostly calming coda, though again builds to a rousing finish with cymbals crashing like so many waves upon the shore.

Named after Illa de Tagomago, a private island off the coast of Ibiza in the Mediterranean, Tago Mago simliarly stands apart as a strange, small marvel on its own amid the early ’70s musical sea.

Posted by Short-Stacked Shamus at 12:02 PM No comments: 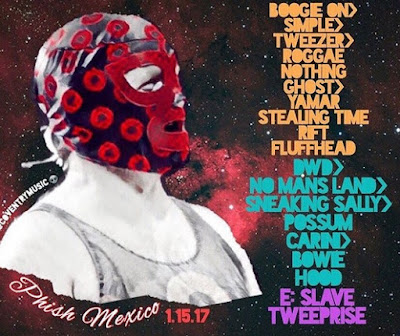 Never miss a Sunday show, especially in Mexico during an odd year in a month that begins with the letter J!

Phish completed their three-show run in Riviera Maya, Mexico. Sunday's show will be webcast via LivePhish.com

Here's what you missed on Sunday Funday... 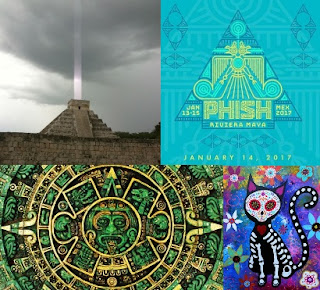 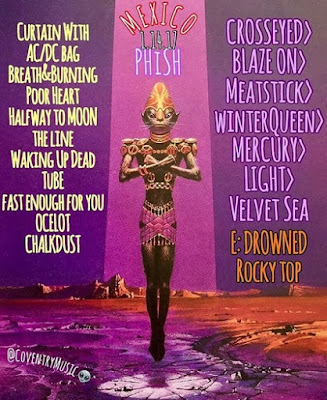 Saturday night in Mexico. What could possibly go wrong? Phish played the second of a three-night run in Riviera Maya. These shows are streamed thru LivePhish.com.

Here's what you missed on Saturday...

Set 1: The Curtain WITH, AC/DC Bag, Breath and Burning, Poor Heart, Halfway to the Moon, The Line, Waking Up Dead, TUBE, Fast Enough for You, Ocelot, Chalkdust 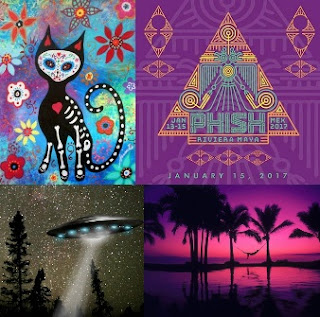 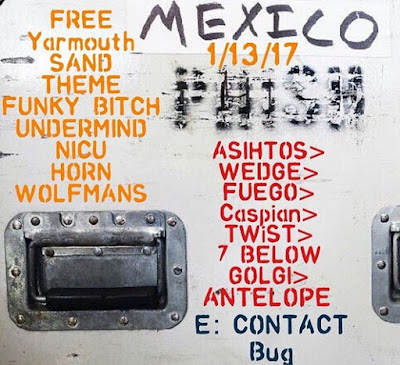 Phish returned to Mexico for a three-show run on the beach. If you're not going, then you're in lucky because Live Phish will be webcast all three nights. 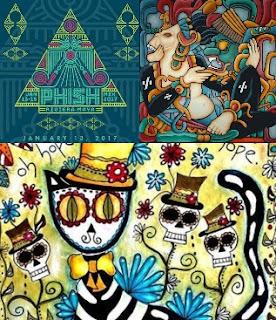 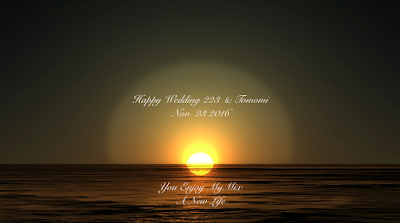 Awesome news. I got an email from one of our dear Japanese friends, Hal Masa. You might remember Jpahan Hal Masa from his renditions of You Enjoy My Mix over the years. Well, Hal Masa has returned with a brand new mix to help celebrate the new year. He originally created it as a wedding mix for friends, but now he shares it with us. Arigato, Hal Masa!
Here's what Hal Masa wrote me:

I created brand new you enjoy my mix a.k.a. Year End Mix for my friend's wedding. This is NOT jam but Jazz, Latin & Chillout. Good for a holiday and I hope you like it. Have a Happy New Year!

Email ThisBlogThis!Share to TwitterShare to FacebookShare to Pinterest
Labels: Hal Masa, you enjoy my mix


Here's the official video of Petrichor > ALS > Suzy Greenberg and the indoor rain gag plus raining cats and dogs...