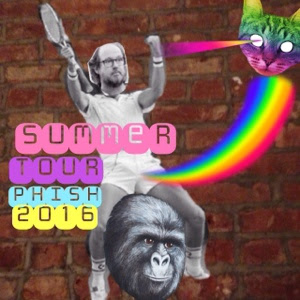 Despite the horrible rumors (that we help fan the flames) that Phish was breaking up, the boys will be back on the road this summer for 23 total shows.

The bulk of the summer tour is 20 shows deep plus the usual Dicks run over Labor Day. Not including Dicks, there's 5 multi-night runs (Wrigley, Mann, SPAC, Gorge & Bill Graham).

Only a solo show at Deer Creek and the two-show run at Wrigley sealed Alpine's fate. Yes, no love for Ohio once again. And the south whiffed completely. Maybe this fall, eh?

There first half of tour kicks off in the Midwest with a rare show in Minnesota, then a two-shot at Wrigley before it heads east then skips out west with 7 shows on the Left Coast starting at the Gorge and driving south along the coast to SF, LA, and SD. And... then there's a long layoff before Dicks.