Came across this gem from Big Cypress!


Click here to view the video.
Posted by Pauly at 4:20 AM No comments: 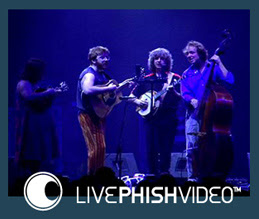 Aside from 1997-1998, the Phish shows in 1995 were some of the best in their careers. The Live Phish series released the 11/14/95 show from University of Central Florida Arena in Orlando, Florida in both audio and video format. It includes that epic 40 minute Stash with Manteca and Dog Faced Boy sandwiched inbetween the epic version. Videos are only $1.99 per track or $19.95 for the entire show. The MP3 id $9.95.

And like my buddy Jay Sheer used to say, if Phish played Rocky Top during the encore, they felt it was a kick ass show.
Posted by Pauly at 4:20 PM No comments:


Click here to view the video of Phish singing the National Anthem. Thanks to Tony Pierce who blogged the gem on LAist.
Posted by Pauly at 4:20 PM No comments:

The schedule for Langerado 2007 has been released. Head over to Jambase.com to see the lineup.

I glanced at it and here's who I'm thinking about:

Friday: Tea Leaf Green, Lotus, New Monsoon, North Mississippi All Stars, Galactic, Bela Fleck, moe, and Trey. It sucks that STs9 and Trey are playing the same time and TLG and Lotus are playing against each other as well.

We also have tickets to Trey and STS9 late night shows starting Thursday! Can't wait for Langerado.
Posted by Pauly at 4:20 PM 1 comment: 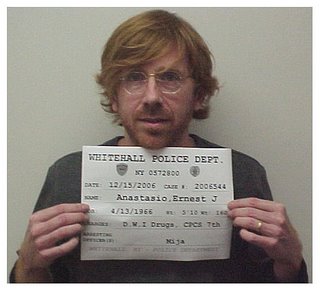 Just read an interesting article in article in the burlington Free Press. Trey Anastasio could serve up to 14 years in jail after he was indicted on according to the article, "one count of felony drug possession, two counts of felony driving under the influence of alcohol and drugs, three misdemeanor charges of drug possession, and a traffic infraction."

No court date has been set.

The initial lineup for the 2007 edition of the Bonnaroo Music Festival was announced today, confirming that the recently reunited Police will indeed be headlining the weekend. The largest music and camping festival in the United States, Bonnaroo will take place this year from June 14-17 on a 700-acre farm Manchester, Tennessee, about 60 miles south of Nashville.

Tickets go on sale on Friday, February 23rd at 12:00 PM Eastern. The complete lineup follows below (courtesy of Jambase):

Email ThisBlogThis!Share to TwitterShare to FacebookShare to Pinterest
Labels: Bonnaroo, The Police, Tool

Solo Page! My favorite member of Phish, Page McConnell is releasing an album on April 17 on Legacy Recordings. Page's album has nine songs and Fish, Trey, and Mike all make contributions.

"I started working on it about two years ago, not with an end goal in mind, but for the joy of the process," said Page. "As the project evolved, I realized the songs held together as a body of work with some recurring themes, especially that of new beginnings. The last few years have been a time of great personal and professional transition, and I think that’s reflected in the album."

Here's a quick video of Big Day Out at the Gold Coast in Australia. We were not supposed to take photos or video backstage, so I had to be super slick and shoot while the surly security guards were not looking. It features performances from The Killers, John Butler Trio, Jet, and Muse.


Click here to view the video via Bloglines or an RSS feed.

Shecky was supposed to get three tickets to Big Day Out for us. It had been sold out for months, yet he knew Tool's manager who said he'd put three tickets aside for us. When we showed up at Tool's hotel, there were only two tickets for us. Shecky was pissed and called up the manager. He apologized and not only gave us three tickets... but we got backstage passes. Talk about getting the hook up!

Since most of the bands we wanted to see were late afternoon and in the evening, we headed backstage and sat in a huge tent adjacent to the dressing rooms. There was free food and drinks and we found a table to sit down and play Chinese Poker. It was a little strange because members of random bands would be walking past us while Brandon Schaefer, Shecky, and I were gambling. The guys from Chemical Romance, Jet, The Killers, and Tool passed us at one time or another.

Shecky started out hot and I went South quickly. I had a 32 point swing in the first ten hands while Shecky picked up 16 quick points. Then Shecky went on severe BCPT (Backstage Chinese Poker Tilt) and was getting his ass kicked by Schaefer. Shecky's -36 swing destroyed him as Shaefer went on a rush. I wanted to end the game to go see John Butler Trio's set. The band had walked past us and headed on stage, but Shecky would not let me leave until he won a hand. That went on for about 12-15 hands and we ended up missing the first fifteen minutes of John Butler Trio. Bastard.

I had only been backstage at a major concert once... and that was Phish in Arizona in 1999. The Big Day Out backstage experience was unreal and surreal. When Kate Hudson walked past us, our jaws dropped. She's apparently banging the lead singer of Jet. At one point she bent over in front of me and squated for a few minutes so she could see Muse. Shecky poked me in the ribs and said, "That's the closest Kate Hudson will ever get to your cock."

Two feet away. Surreal. I was jotting down notes and the setlist and just like the scene from Almost Famous, I expected Penny Lane to take the pen out of my hand and toss it away. And yes, she's amazingly smoking hot in person.
Posted by Pauly at 4:20 PM No comments: