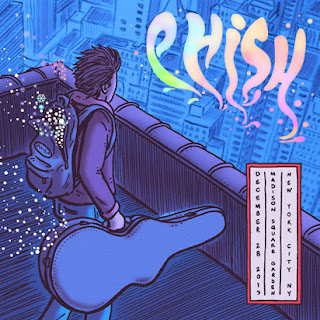 Phish returned to Madison Square Garden for the first installment of their traditional four-show holiday run.

These shows will be webcast over at Live Phish.com with options for regular and HD. Yes, HD Trey!

I shall be attending all four shows with the lovely @change100 (follow her for those infamous fashion updates). Also, if you're late to the game and finally caved into Twitter, follow @CoventryMusic for updates (including random vines and Instagram pics). Updates are weather permitting (e.g. so long as I have battery power and don't get too spun. Heh.)

Here is the setlist from the first night...

Set 2: Sand > Piper > Back on the Train > Tweezer > Backwards, Steam > Silent in the Morning, Waiting All Night, Antelope


From one of the highlights (STEAM) of the night (via Instagram)... 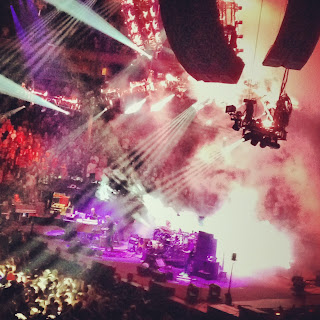 Pseudo hometown show. I grew up in NYC and MSG holds a special spot for me (saw my first-ever Dead show at MSG when I was 15 and that magical evening was the first of many wondrous evenings at the "world's most famous arena").

Good crew: my girlfriend (@change100), Senor, and our pal G. My girlfriend celebrated her 75th show. After working all day yesterday, she flew the redeye from LAX > JFK. Senor and I caught at least 100 shows together including Japan 2000 tour. First time I met G, he had just got back from Europe where he saw Phish in Italy with our mutual friend Gil. I was super jealous and thought that G was bad ass because he went to a foreign country to see Phish. That's dedication. These days, G is a family man and doesn't see too many shows. In fact, he revealed that he only sees two concerts a year. Only two. Both Phish. "I see them once in the summer and again at MSG to end the year." I like his style. If you only had a chance to catch two concerts a year, you bet your ass it'd be Phish for me too.

Preparty at Javier's in the East Village with the Connecticut boys. Even Igor made a cameo. No cactus dust. @change100 smuggled in a bottle of Fireball. She pulled a Leslie, who had snuck in at least a case of Fireball to Phish shows over the summer. Senor scored us all good seats... Gordo side, 'center court' about 20 rows off the floor.

Epic curveball with Wedge opener. Woulda expected that in Colorado, but Wedge was a welcomed change of pace instead of the same half-dozen of highly-popular openers. Wedge jam was an insta-highlight of the set. Axilla was on my Top 5 list of "itching to see rockers." Wolfman's was full blown funk-ragefest. The exuberant crowd couldn't wait to unleash several weeks of bottled-up frenetic energy, which had built up and was simmering since the last show in AC. Page milked some serious boobies in something I referred to as "Total Recall 3-Tit Hooker Funkgasm." Heard several Wombat teases. Where the fuck is Abe Vigoda? We got the first of two Wingsuit tunes with an electric version of Monica. I had set the over/under at 5.5 Wingsuit songs. I think they'll do at least 6. At this rate, we'll get 9. Bummed out with Seven Below. Trey ADD got the best of him and they aborted a potential delicious jam. Too bad short-leash Tube was a four-minute quickie. I wondered how MSG's facelift would affect the bouncy feeling that occurred when the floor was actually moving up and down. It happened a few timesduring Free and Julius. Average first set with Wolfmans and Wedge as the highlights.


A crew of familiar faces were nearby (@PeteLikesPhish, @adamicculus, super-trooper @SoozyGreenberg, and our fellow LA-heads @phortin and @sarahzeee). We couldn't decide if we were getting a DWD opener or maybe a cover (Drowned, Rock n Roll, Crosseyed). We got another minor curveball with a Sand opener. I thought Gordo didn't like it? He was digging it tonight. Gordo was sporting green glow in the dark sneakers and what appeared to be green pants when CK5's lights hit him the right way. Sand had a few rough patches but overall it was a Sandy MSG dance party to kick off the second frame. Piper started out with what Jonas described as "dirty tones." Piper was peppered with a few rough spots but peaked at the right moments. More urban funk with Back on the Train. Thought the boys would save Tweezer for another night but they brought out the GIMP!

[Tweezer side note... Fink was eagerly awaiting a final match up between Tweezer and Carini for Song of the Year. I enjoyed majority of it, but definitely lacked the strength and power of some other versions from this fall and summer. Guess we'll have to see what Carini pulls off. It's coming... but when?]

Backwards is always a buzzkill. But Senor loves Backwards. I mean he really fucking loves that song, especially the backstory. It's hit or miss for me and I was bummed when it popped up because the first four songs of the set were on point until a Backwards ambushed everyone. Senor was wrapped in his own bubble of bliss. When I think I'm about to have a bad time, Senor reminds me to stay in the moment and enjoy every second of every song. The good thing is that Backwards is an ascending emotional ride.

Steam.... delivered. Whatever rust had built up was chipped away by the end of Steam. Started out slow then frantically built up to a wicked cacophony of blissful dissonance. They really tried to blow the room off the Garden. Demolition Men. Welcome to the Phish Demolition Squad.

No mas HORSE. It's done dead. I thought HORSE was going to be part of the NYE gag, which is why we didn't hear it at all this year with several other songs coupled with Silent in the Morning. The second Wingsuit tune, Waiting All Night still needs work. I think they should send it back down to the minors until they shaved off all the rough edges. "It would be better as a TAB song," said @change100. "It would sound better with horns."

Energetic turbo boost Antelope ended the set. Senor thought they'd save Tweeprise til the end of NYE show, but they tacked it onto the encore with Suzy Greenberg. G wanted to hear it badly and he got it. My girlfriend and I visited Strawberry Fields in Central Park in the afternoon and dropped by the Imagine wheel. I had put the vibe out for a couple Beatles tunes.

Fun night with friends. Phish finally got their shit together late into the second set and unleashed a face-ass-tits-cock melting Steam. Go listen to it for yourself.

Don't ask for links. They will come if they come. Be patient.

I wasn't in the room, but watching the stream last night, I felt that the show had a couple of opportunities to take off, it just didn't.

Congrats on the milestone, Doc.

Best Birds of A feather EVER

Many thanks to all!!!

The 11-11-98 at the tight Van Andel Arena in Grand Rapids, MI was actually one of the great 'gems' in phishtory. I wish I had a SBD:)
The PYITE opener, Tela and Birds were truly outstanding.

If you need your ex-girlfriend or ex-boyfriend to come crawling back to you on their knees (no matter why you broke up) you need to watch this video
right away...

(VIDEO) Get your ex CRAWLING back to you...?