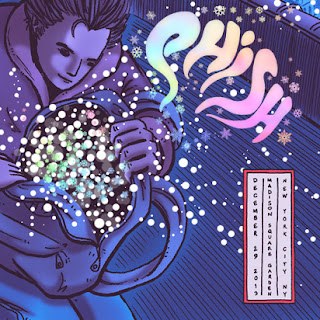 Phish returned to MSG for the second of four shows.

FYI... the entire run is webcast over at Live Phish.com (with options for HD for a few extra bucks).

In case you missed it, here's what they played on night 2...

Never miss a Sunday show, eh? It's not easy keeping every rigid faction happy because of Phish's savvy, yet impossible-to-please fan base. On Sunday, we got another buffet of Phish featuring a limited menu of throwbacks, country hokey, a sprinkling of greatest hits, a couple of new Wingsuit songs, plus a 6-song second set for jaded vets (like this guy) desperately seeking those elongated jams reminiscent of the Oxy years.

My pal G said it best about greatest hits Phish. "I don't mind those shows. You know why? Because the greatest hits are... great." Very zen-like attitude from G.

Wet Sunday in NYC. My girlfriend was convinced Phish was going to open with Drowned. I watched some football at my bro's apartment then we checked into a hotel near the venue so we had the closest commute to a show in a very long time (excluding Hartford). Our French friends rented an apartment around the corner. Michel and his crew are JamCruise vets seeing Phish for the first time. Always fun to share the Phish love with a diverse bunch of people, especially cerebral Europeans. Michel and his friends are in a French funk band, so they adore those blistering moments of galactic groove and deep-fried-Phish-funk. Fantastic that Phish opened with MoMA in their honor.

Michel scored us 200-level seats. My girlfriend (@Change100) and I sat with one of the Frenchies, Adrien, who was seeing his first show. I leave newbies alone and let them experience everything without me interfering with their initial experience. I prefer to be invisible and more there as a guide to answer questions/setlist info, or explain the truly weird things. I love watching new phans soak up their first show and pop their Phish cherry with mesmerizing gazes and wide grins. We sat right above the stage -- Roid-Side, Gordo-Side -- and high up enough we could almost touch Sky Bar, but not quite old-school MSG blue seats (start "Potvin sucks chant" now...). Our section was NOT overrun by schwilly wooks, but it was laid back with lots of tokers and a suspicious wookette who we thought was turning tricks in the last row. She continuously brought up random dudes every 20 minutes, giving hand jobs for heady mothership crystals or organic-squeezed molly. God bless Tinder.

Oh, so how about the music? The first four songs in the line up -- MoMA, Rift, Roggae, Sparkle -- included two from coke-addled Rift album. Although they tried to breathe some life into Rggae jam, it was too early in the show for something truly bizarre to go down.

The Line was the first of two Wingsuit songs on Sunday. As a sportsbettor and sportswriter, I appreciate the concept behind the song's origins. The Line sounds too much like a Wilco song; I couldn't tell if that bothered me or if that was the reason I dug it. During the break-up years, I always had hoped Page and Jeff Tweedy would form a new band together, but then Tweedy would get too insecure and fire Page. A relaxed Stash had those long, loose tendrils tickling the dark side of the force. I prefer those brain-turned-to-mush sojourns down the rabbit hole, but I was fairly sober (e.g. "PT sober") and wished I was cooking on mushrooms, but Stash jam never got too ferocious enough to spook out the rest of the acidheads.

555 won me over. I was on the fence after Halloween, but the second time was a much tighter version (but as Fink pointed out, it lacked the SF Bill Graham jam segment from 2012). Hey, and it's only going to get better. Early favorite Wingsuit song. The intro reminds me of Lowell George and Little Feat. Although I can't wait for a juicy Wombat funk burrito. Gordo has a little more confidence with his role in the band, so this was one of the songs that best symbolized and crystallized his evolving role with Phish.

ICE included an insane jam out that came out of nowhere to ambush all of us. Even the band was surprised. Felt like someone smuggled in a small thermo nuke and detonated it at the end of ICE. When Page stands up to play his clav, then we all get down. Page was channeling something from the heavens. He had become possessed with something. Maybe he broke into Knicks' JR Smith's stash in the lockeroom? Smith is the biggest snowblower in the NBA since the cocaine-glazed late 80s. Who knows how much Bolivian marching powder Smith (and Page) has hidden beneath the bowels of MSG?

Gumbo was a big fat pot of swampy deliciousness. 555-ICE-Gumbo trifecta was the highlight of the first set. Walls has slowly become a reliable set closer over the past year. Instead of the typical "peak" liftoff song (e.g. Suzy or Zero), Walls has taken on a tough roll of the "set closer." It's the one song that is supposed to leave the crowd wanting more. They've played it more and more because Page digs it and Trey loves jumping up and down at the end of Walls (when it sounds eeirly similar to Rock n Roll riff).

Crowd went berserk whenever CK5 lit up the space behind the stage with his small dot-lights that made it look like everything was underwater. Interesting crowd for a Sunday show. Saturday night had a decent percentage of hipsters and BBM (Brown Boot Mafia, a term we use in San Francisco to describe hipster chicks aka LCD Soundsystems\'s 'Drunk Girls' from the Marina). Sunday's show was a much easier ticket, so a lot more wastoids crashing the party looking to have a good time. We saw floor tickets available in front of MSG for face and below! Scalpers took a bath. Good riddance. Sunday was the most extras (for a NYC show) floating around in a very long time.

Predictable DWD set two opener, but you can never anticipate which slippery slope the band will take down the DWD mountain range. It clocked in roughly 20 minutes with multiple peaks and valleys. Trey had led everyone so far out into the cosmos that they sort of got lost until Fish took control and punched a hole through time and space. Good to see Fish keeping Trey honest there... Fish gave him enough opportunity to navigate the cosmos but when it got too out there, good old Fish created his own wormhole and zapped the Phish spaceship back to Earth's atmosphere.

The highlight of the night was easily Carini. Ooooh that dirty little vixen! Carini pulled ahead of Fink's Fight of the Year in its bout against Tweezer. Unfortunately, Saturday's Tweezer started out with tons of potential but before the jam could get really cooking, it was cockblocked and ripcord'd in favor of... Backwards. Yikes. Talk about a Debbie Downer. Carini eventually melted into Waves, but not before some serious thrashing, a Page spooky pumpkin interlude, and a couple of Trey-induced woos to end the woo hiatus. I know Wildo was back in Colorado shaking his head!

Waves completed a three-song run clocking in at 45 minutes. The set lasted six songs total... that's the Phish jammy goodness I missed. Short and sweet Golgi, so the bulk of the set hinged upon five songs. I expected more woos in Twist, but it was rather subdued. A semi-loose Bowie closed out the set, but figured they'd squeeze in one more. The French kid Adrien had a blast. Glad Phish served up a good show to first timers. On the flip side, Phish delivered an edible show for those famished vets with an insatiable appetite for the Phish.

Possum encore. Mixed emotions. Solid version (as per usual). Rather hear it as a popping opener and reserve the encore for a killer cover for the encore (e.g. Emotional Rescue, Sweet Jane, or previous MSG covers like Been Caught Stealing, WMGGW, and who could forget Sneaking Sally Reprise?). With that said... two shows in and not a single cover, yet four newish songs, though.

In the final bout of the year, Tweezer broke his leg on the rock solid Carini.

I thought 555 onwards was almost as solid as it gets. I just wish they had pushed II by dropping Golgi, and going Bowie, Slave to finish the set. It might have made it set of the year material. As it was, though, it was really damn good and fun to listen to on a Sunday night.

@RP Kraemer... we're on the same page! They really got shit together from 55 onward. Woulda gladly traded Golgi for longer Bowie plus Slave!

I hate to be that guy but here I am. Droids?

I was in NYC at that time and of all four times I was there, this was the best! I really wanted to visit this concert, but I was a bit afraid I won't find my way so late at night after it. Special thanks to http://new-york.hotelscheap.org/ who provided me with a cheap hotel right next to Madison Square Garden.