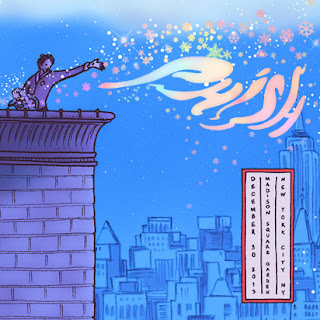 FYI... this show along with NYE shall be webcast over at Live Phish.com (with options for HD).

Phish is what you make of it. I've relied on Phish (and the scene) as an emotional crutch for many years. Phish is a healing band; every show offers up a healing experience. Like pious old Spanish ladies trekking across Europe in search of an image of the Virgin Mary on a piece of stale bread, I have made the Phish pilgrimage more times than I could count. Our bud Mr. Fabulous (from the infamous Cincy Deadhead crew) needed a Phish show more than any of my friends. I knew he was coming for NYE but he made a last minute decision and flew into NYC a day early so he could partake in the 12/30 festivities.

My friends engage in silly debates (e.g. who wins a fight -- grizzly bear or silverback gorilla?) and we've often argued about which is (historically) the best show of a MSG run? 12/29 vs. 12/30. My theory is that the band is often rusty leading up to MSG and getting used to the spacious MSG on the first night so 12/28 is often average, but there's too much pressure on 12/31, which is why 12/29 and/or 12/30 are usually the pinnacle of the four-show MSG run.

I really dug the six-song second frame on 12/29, but they whipped up a 9-song course for the second set of 12/30 and anchored by a 20-minute Chalkdust Torture that was so fucking far out into the cosmos that I had forgot what was being played... on six different occasions. Then again, the first set was as sloppy as I had seen in a while and almost felt like a 12/28 show. I dug the song selection and the energy levels were high, but despite the flaws, it was still a fun set. Very few bands can flub a bunch of shit and still deliver an above-average set, which is a testament to Phish's abilities. We've taken for granted how high Phish's musicianship is, so whenever they make an obvious error, it stands out a little more. Sort of like when Peyton Manning throws an INT, or Larry Bird misses a free throw.

Pre-party in our hotel. Lots of whiskey. We found our friend T just before show began. We had good section (minimal talkers) in the next-to-last row of Sec 102/103. Perfect view of the stage in the back. My girlfriend smuggled in more liquor. She had a great mentor in Leslie Fireball.

I had a minor issue before show began and lost part of my stash of Purple Kush.  Hey, only users lose drugs, right? It fell out of my pocket in front of MSG while I was trying to stash my stash. It was an awkward situation too because I know precisely when it fell, but there were five NYPD officers milling around and if I wheeled around and picked it up, then I was convinced I was going to get pinched and spend the next 48 hours in the Tombs, so I kept walking and left it there on the ground and hoped some other head found my Kush. Luckily we decided to go inside on the early side, plus I had plenty more and was staying in a nearby hotel so I could re-load supplies quickly. That minor fuck-up could have been horribly worse. As I told Mr. Fabulous, "If that is the worst thing that happens to me at the show... then I'll take it."

First set started out on a positive note. Mr. Fabulous mentioned how he enjoyed KDF more so than the average fan. The only other time he saw a Phish show at MSG in 2009, he had bought a KDF lot shirt in one of the dive bars around the venue. Someone was slinging shirts inside the bar and he snagged one. The Joker's song Gin was welcomed with open arms, but the jam was on a very short leash, which was the other (meh) theme of the first set. The band could have really blasted off at three or four other moments and really taken off into unchartered waters, but the band showed extreme restraint and kept the jamming short and sweet. I dunno if it was lack of confidence or ADD Trey... or both. I don't need a 4-song first set (although that would be kick ass if we had 80-minutes of just Gin, Wombat, 46 Days, and some other massive jam vehicle like Jim).

Then all hell broke loose. The crowd went apeshit bananas for at the first few notes to Wombat. I can't recall a crowd anticipating a song like that in a very long time. Seems appropriate... Phish funk is one of the most popular eras of the band and Wombat is a quintessential Phish song... goofy lyrics and a sick, infectious hook. I love that Wombat starts off like a Beastie Boys song and then quickly transforms into a funk machine. No Abe Vigoda sightings.

Despite the sloppy first set, Phish regrouped at setbreak and got their shit together. They let it rip second set and we were gifted glistening gems like Chalkdust and Ghost. I can't tell if Hood was really that good, or if I was really shitfaced (relatively sober night, but everything sort of hit me in the middle of Hood when inside MSG got bright bright green... like everything... my entire color and light perspective was green for about 90 seconds I thought someone had dosed me... so when I finally pulled out of that bizarre spin and got back to level ground, I realized that I was fine but totally bummed out that I didn't get dosed!).

No covers. I'm sure everyone had that one guy in their section who kept screaming, "No covers yet! No covers!" This one annoying guy kept shouting out "No covers!"

The 'no covers at MSG' theme fits the no covers theme from Halloween Wingsuit, but then again they might be saving it up for NYE. At the same time, I dig covers especially those 70s classic rock tunes because it gives Page a chance to really shine. For some odd reason, Page obliterates cover songs but without any covers, Leo is not getting as much love.

Yarmouth Road batted in the 4-hole. It's no Big Papi. 46 Days could have gotten really freaky, but it was also on a short leash. But definitely an underrated moment of the night. Page crooned the crowd during Lawn Boy. Insert boorish joke about wet Phishy chicks here ________. Leo went over to Gordo's side of the stage, but Fish felt a little left out so he joined them. I'm sure they were scouting out the "talent" in the front row.

PYITE was slop city, but the crowd lapped it up. I was pumped to hear the opening licks and they muscled through all the messy parts. Energy truly trumps precision (e.g. every Sex Pistols song ever). Crowd sing-a-long for Sample in a Jar and I was shocked Jibboo closed the set instead of a sizzler like Cavern or Zero. Boo was another happy and fluffy song. First set had a bunch of those.

Second set was all smoke minus Devotion to a Dream, the one Wingsuit song that my friends had dubbed "Dad Rock." It's not quite The National, but it really felt out of place and was more appropriate in the first set. Chalkdust mayhem anchored the second set. Mike's Groove did not include Simple nor H2. Instead we got a little Dream/Ghost lunch meat. Ghost delivered. Big time. But they also kept it on a short leash. Short and sweet. Compact jamiliciousness. Simple was stand alone. I suspect that Simple popped up instead of Cities in order to fit the "no covers" theme, but they still found a way to squeeze in a "skyscrapers" lyric.

Hood? I haven't listened to last night's show yet because I never re-listen before I write a recap, which is probably not the best idea because I'm going off memory, notes, and tweets... and I didn't tweet much last night. Guess that happens when I'm having a good time.

Cavern was going to end the set. Trey had pretty much thanked everyone but Fishman wanted to keep the party going. Initially, I thought Fish forgot they played Weekapaug because that's what it sounded like he was playing... the intro to Paug. Both Gordo and Trey looked surprised and were like, "What the fuck, Fish?" But they quickly figured out what was up and launched into a bong-rattling First Tube. Big Red... full-blown wank machine. First Tube is one of those songs that completely fills up every nook and cranny inside MSG.

Slave is my favorite song. A perfect way to end the night. That's how you end a fucking show! Glad they did not cheese out with a lame ballad or something worse like S.O.L.

Three down. One more show to go. Three sets coming for NYE. What will the boys have up their sleeve?

Nice to see Dr. P. back in form. Thanks for the recaps!

i'm looking for some droids...

I too am looking for some droids....

Here are your Droids.
These are flax, so fair warning for the large file sizes...

this should take care of any droid needs

Do you need free Twitter Re-tweets?
Did you know that you can get them AUTOMATICALLY AND TOTALLY FREE by getting an account on Add Me Fast?