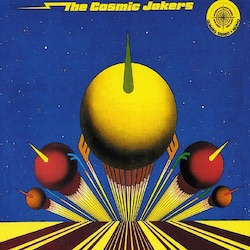 The Krautrock genre is an eclectic one, covering such a wide range of styles it’s really misleading to consider it a homogeneous category. That said, there was a lot of collaboration between individuals and groups to whom the label has been applied, including among those appearing on Julian Cope’s list of “50 Kosmische Classics.”

The high frequency of such get-togethers predictably led to some blending of styles and influences among the category’s members. It also makes those Krautrock “family tree” diagrams such as this one pretty damned complicated.

Probably the most famous example of such collaboration was the Cosmic Jokers, a Krautrock “supergroup” comprised of...

Posted by Short-Stacked Shamus at 5:32 AM