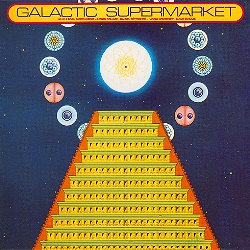 A kind of accidental Krautrock “supergroup,” the Cosmic Jokers were truthfully just an assemblage of musicians whose jams were surreptitiously recorded, edited, and released without the oversight or permission of the participants.

In other words, they weren’t a “group” at all, technically, but rather just musicians turning up at acid parties hosted by producer Rolf-Ulrich Kaiser and his girlfriend-partner Gille Lettmann at Dieter Derks’ studio. (See the previous review for more backstory.)

As such, the records sometimes feel like the products of ethnomusicological research -- “field” recordings capturing the exciting, unpredictable pulsations of a uniquely talented tribe. Or perhaps like what you might hear emanating from the back room of some weekend wingding, and after you stumble down the hall to see what’s going on you suddenly realize whoa... these guys are good.

Galactic Supermarket is the second of the five Cosmic Jokers LPs released in 1974, organized in post-production as two side-long pieces each casually presented as three parts.

The first part of Side 1’s “Kinder des Alls” features mostly conventional bluesy jamming with occasional weird effects and female vocalizing dropped here and there to keep you from getting too settled. A synthesizer mimicking choral voices then heralds the second part, suggesting the musicians have dropped their instruments and wandered into the backyard after someone noticed an unidentified flying object hovering above the horizon.

Out of the electronic washes eventually emerges a doleful organ, thereafter replaced by agitated beeps and boops until the players make it back inside to their instruments. A few tentative gestures lead into the third and final part, a sometimes placid, sometimes frantic finale in which Klaus Schulze and Jürgen Dollase play keyboard pong over top of the rhythm section’s improvising.

The title track comprises Side 2, starting with an early Pink Floyd-ish bit of warming up underpinned by a “Set the Controls for the Heart of the Sun”-like bass. The individual band members gradually rev up and recede, with the track gliding into the second part without any specific aural signpost to mark the transition. Disconnected bursts then continue to glide past on both sides without being weighed down by any rhythmic gravity pull.

The third and final part begins with another female voice -- either Lettmann or guitarist Manuel Göttsching’s girlfriend Rosi Müller -- announcing a heavily-echoed special over the PA: “Galactic Supermarket... presents raindrops... Galactic Supermarket... presents cosmic raindrops....” Things remain in an unhinged, experimental vein through these last eight minutes of the disc with the group gradually building a disorienting wall of sound before the final fade.

Though not as consistently gratifying as the self-titled debut, Galactic Supermarket nonetheless has enough prog rock staples on its shelves to tide you over until your next trip.

Posted by Short-Stacked Shamus at 11:12 AM

New Diet Taps into Innovative Concept to Help Dieters Get Rid Of 20 Pounds within Only 21 Days!