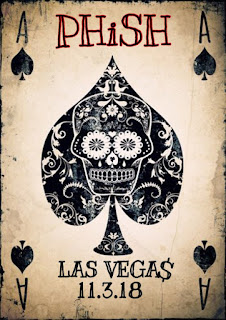 The finale. Phish finished their fall tour with the fourth of a four-night run at the MGM Grand in Las Vegas. Did you survive? We barely made it. Hey. we've been up for three straight nights... what's one more?

This show will be webcast over at LivePhish. There's probably a Mixlr stream floating there for you poors seeking audio.

Here's what went down on the final night of tour in Vegas...

I think the url of that is wrong. Nothing there :(

yeah doesnt for me either :(

Worked fine for me. Thanks again Phans
See ya next month!

Link works for me. Thanks for everything.

Thank you to all of you for taking your time to help the rest of us...

Thanks to :) for the droids we werent looking for.

Thanks to other droid linkers as well for this fall tour.

Thanks to everyone else for dropping by.

See you clowns in NYC for NYE.

On our visit to this place, we mostly stayed downstairs, where the beer and liquor selection was quite admirable. The staff at party venue here really pride themselves on the beers and food they have.