Day 2 was a more compact day for us and we only caught six bands; Grey Boy All Stars, Yerba Buena, JJ Grey & Mofro, Perpetual Grove, Medeski Martin & Wood, and My Morning Jacket. We skipped The Disco Biscuits, Michael Franti & Spearhead, Blackalicious, The Slip, and Soulive.

Sometimes you get a slow start to the day at a music festival. Day 2 was just that for us. The Joker went to the Disco Biscuits' late night show on Friday night and didn't get back until almost 5:30am. I had woke up at 8am and couldn't fall back asleep so I downloaded pics and wrote a quick recap of Day 1, while Nicky and the Joker were still crashed out. By that point, my back and knee were sore and bothering me. I popped a few Motrin and went back to sleep at 11am for an hour or so. When I woke up from that nap, I felt much better. The pain had almost subsided.

We didn't leave the hotel until after 2pm and hit up Denny's (again) on the way to the festival. We missed The Slip, Soulive, and Keiren Hebden from Four Tet. Sometimes those early acts miss the cut because it takes a while to mobilize the crew.

Pablo and Chris were waiting for us near the entrance to the actual venue and we wandered over to the Everglades stage. On our way, we caught Yerba Buena, a Latin-funk band from NYC that Schecky recommended that we see. They were a nice combo of Afro-Cuban-funk and backbeats with a tinge of hip hop thrown into the stew.

I was particularly excited to see the funkified melodies of the Grey Boy All Stars. When the schedule was first announced, I was initially pumped to see the GBA's on the lineup. They don't play too often and they are one collection of musicians that I rarely get to see. The GBA's took a six year hiatus while their members ripped it up with various solo and side projects. Elgin Park (guitar) has been working in Hollyweird scoring flicks such as Donnie Darko. Karl Denson (sax & flute) had been touring the world with his band Tiny Universe, just as Robert Walters (keys, organ) had been playing with 20th Congress. It had been a while since they all took the stage as a unit and tore it up for their hour set playing a few old tunes and a couple of jazz and Nola standards. The GBA's were one of the special moments of Day 2.

Since the two acts that we really wanted to see next were both at the Everglades stage, we moved up really close after the GBA's to set up camp. After smoking tough, I wandered around by myself and caught JJ Grey and Mofro. JJ Grey is the self-appointed redneck surfer who got to travel the world in his quest for good surf. Along the way, he picked up a few instruments and at any given time he can play guitar, piano, harmonica, bass and drums. In addition, he's a lyrical master and has a better than average voice.

I caught one song at Perpetual Groove. They're one of many bands that broke out of the Athens, GA scene and these guys have gotten notoriety over their live shows. You never know what you are going to get. P-Groove is an eclectic mix of psychedelic jazz, indie prog rock, R&B, and trance electronica.

We skipped Blackalicious and Michael Franti although we could hear the music from both stages during a break or a lull in the music. They were both scheduled against Medeski Martin & Wood. The NYC trio have been sharing their original sound for almost fifteen years which includes over ten albums. They began as an acoustic trio (bass, piano, drums) in the early 1990s, but John Medeski found it difficult lugging a piano around for gigs outside of the city. That's when he added a Hammond organ and the rest is history. Chris Wood plays both electric bass and the traditional stand up bass while Billy Martin keeps the pace on drums.

Martin, Wood & Medeski
I thought that MMW's set at Vegoose featuring Maceo Parker was one of the highlights of Vegoose, so I made an effort to see them again this time around. Since I've seen MMW over fifty times, they are one band that usually gets passed over at music festivals so I can get a chance to see other acts. That's how I felt about The Slip and Soulive on Day 2.

We also skipped The Disco Biscuits from Philly in order to catch My Morning Jacket and their two hour set. The Joker said that the show he caught the night before was average so we wouldn't be missing much. Besides, the last three MMJ shows that I saw blew me away. Last year's late night set at Bonnaroo hooked me, along with a sizzling show at Roseland Ballroom in NYC and an epic show at the Fillmore in San Francisco for New Year's Eve. I don't throw around the term "my new favorite band" too lightly. And without a doubt, thanks to Lori, I have been extremely fortunate to stumble upon those guys from Kentucky who remind me of a Southern-fried version of AC/DC. I love the fact that some of the guys in the band look like Pablo and the drummer could win an AlCantHang look-a-like contest.

By the time MMJ took the stage, Wilkins and his crew from Hilton Head joined forces with our base camp. We had ten or so people as we blocked off a nice area to dance and party. MMJ opened up with their standard show-starter of One Big Holiday. Wilkins was floored because his band back in South Carolina actually covers that MMJ song! Next up were some heavy hitters with Wonderful Man, Dancefloors, and Lowdown. The middle of the set was delicious with Wordless Chorus, Phone Went West, Cobra, Golden, and Dondonte. They closed the set with Gideon and Off the Record plus another song we couldn't figure out the name to, so we just jotted down the opening lyrics in our notebooks, "Oh she ha...!" 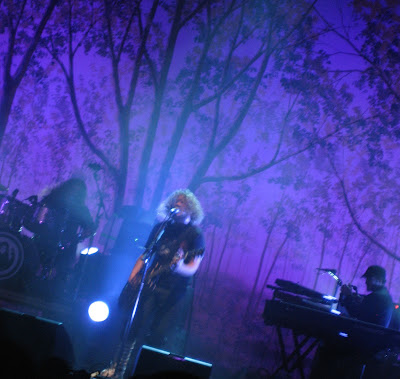 Jim James
Jim James, the lead singer and guitar player for MMJ, wore moon boots and bounced back and forth onstage like an eight year old jacked up on sugar corn pops and ritalin. His voice is unique and I don't know too many guys who can nail those high notes with such ease. He played one song by himself with his acoustic guitar. I dunno if it was Kentucky to Nashville or "Don't Call Me Out" which I had scribbled down in my notes. By that point things were fuzzy.

The band returned for the last 15 minutes of the set and blazed away with the crowd-pleaser Mahgeetah where several thousand fans were jumping up and down in sync with Jim James the super freak. When the set end, the Joker and I agreed that MMJ was the highlight of both days at Langerado and that all the bands playing on Day 3 will have a ton of work ahead of them if they want to replicate the energy and intensity of MMJ's set. Trey's set felt stale compared to the soul crushing tunes that MMJ busted out.

Day 2 was a short day that featured an acquisition of bunk doses, but the weather was amazing with plenty of sun and lots of breezes. The day was anchored by the return of the Grey Boy All Stars, Medeski Martin & Wood's slamming set, and the epic MMJ set to close Day 2.

Two days down, one remaining.

Here are some random Day 2 pics: 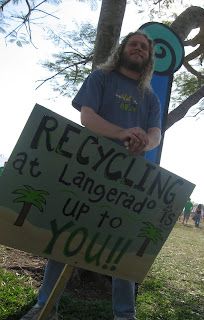 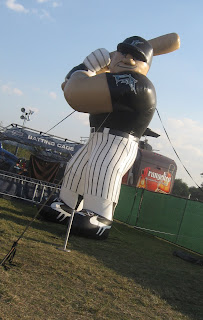 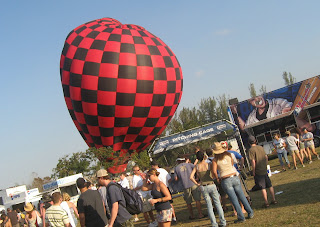 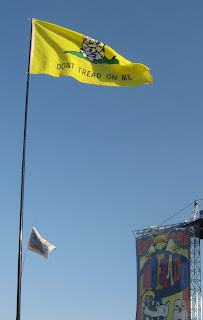 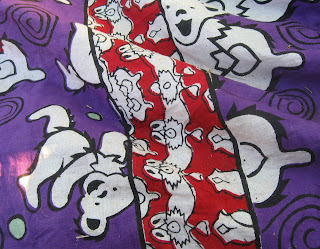 My Morning Jacket
Posted by Pauly at 4:20 AM