I had never done the Langerado Music Festival in Sunrise, Florida, but was excited to do so considering the lineup which featured over a dozen of my favorite bands. Since I wouldn't get to attend Bonnaroo this summer, I welcomed the sunny three-day music festival held in Markham Park in Florida with open arms. In the last nine months, I've been fortunate to see several of the largest music festivals in the world including Bonnaroo (June 2006), Vegoose (October 2006), Big Day Out in Australia (Jan. 2007), and now Langerado. 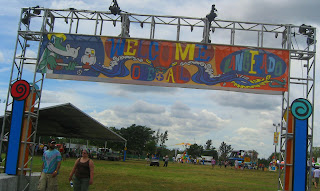 Day 1's lineup included nine band and acts that I got to soak up such as The Heavy Pets, Dubconcious, Lotus, Tea Leaf Green, New Monsoon, North Mississippi All Stars, Galactic, Bela Fleck, and Trey Anastasio. A few bands that I wanted to see on Day 1 but had to skip due to scheduling conflicts included STS9, Stephen Malkus and The Jicks, The Hold Steady, and moe.

We had the usual suspects for this event. Nicky flew out from Hollyweird. The Joker came down from Boulder, CO. Professional Keno Player Neil Fontenot and myself joined the crew as were ready to party it up for another music festival. We had special guests such as Sweet Sweet Pablo and his buddy Chris. The night before, we attended two pre-festival concerts to start the festivities on Thursday and caught a Trey Anastasio Band show at Revolution in downtown Ft. Lauderdale, followed up with a late night set of STS9.

On Friday morning, we all eventually met up at Denny's at 10am for breakfast, which was right next to Pablo's hotel. We headed to his room for a session before we drove over to the festival. It took less then a half hour to drive to Markham Park and park our rented Jeep. We lathered up with sunscreen, hid our stash, and headed into the festival.

Professional Keno Player Neil Fontenot tends to wander off at this events. Sometimes we don't see him for hours at a time. He split off right away to hustle some of the spun out crusty STS9 kids in various illegal dice games in the camping grounds. 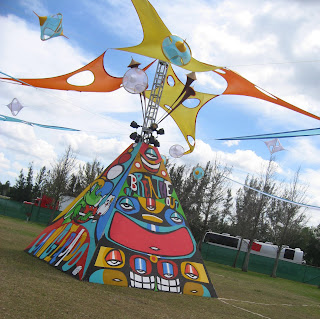 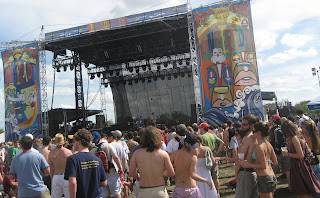 Security was light and we got a schedule on our way inside. There were three stages laid out in a large rectangle the size of several football fields. Surrounding the stages were various vendors. We were there so early that we got to catch the first two bands playing. I over-estimated how long it would take us to get into the show.

The Heavy Pets played at the Swamp Tent. The Heavy Pets are a local band who won a slot at Langerado through a contest. The squeaked in and ended up opening Day 1. They described themselves as "progressive, high-energy, guitar-driven rock n roll, to funky reggae, to inspired, reflective folk music." We caught a couple of songs and headed over to see Dubconcious, a reggae band from Athens, GA that I had seen a few times before. Those musicians truly believe that their music (and all music for that matter) has healing and emotional energy attached to it.

We headed over to the Swamp Tent and timed how long it would take to walk back and forth between stages. The Sunset Stage was exactly in the middle of the fairgrounds with the Everglades Stage on the far right side and the Swamp Tent near the entrance. It took less than ten minutes for the walk and we expected that it would take up to 15 minutes during the most crowded moments.

The Swamp Tent gave us plenty of shade. Daddy turned me onto Lotus and I've been able to catch them a few times. They are a five piece band from Philly that falls into the same category as STS9, Particle, and New Deal... they are musicians who play and replicate techno/club/dance/electronica music with regular instruments. I wanted to see their entire set, but they were up against Tea Leaf Green.

Tea Leaf Green
If it weren't for My Morning Jacket, TLG would have won Pauly's favorite new band award for 2006. The San Francisco based band has been winning over the hearts of many youngsters in the jam band scene while picking up critical acclaim from the music pundits with regard to their songwriting. Lead vocalist Trevor Garrod, who also plays keys and harmonica, is the heart and soul of the band. TLG busted out two of my favorites, The Garden, Part 3 and Taught to Be Proud.

We headed over to see New Monsoon. Nicky was skiddish because she hates any band with a banjo in it. She and the Joker wandered around the vendors while I stuck around by myself and watched their set. Also hailing from San Francisco, I last saw New Monsoon at Knit Ball in LA last spring. They are an interesting mix of reggae, folk, country, funk, and rock. The band members play a variety of instruments ranging from Latin, Brazilian and Indian percussion, drum set, didgeridoo, electric and acoustic guitars, banjo, mandolin, bass and keyboards. They invited sax player Jeff Kaufman to sit in for a few songs. They also busted out a Led Zeppelin cover of Bron-Y-Aur Stomp which energized everyone in the crowd. The Joker returned and told me about the food he ate, while Nicky showed off her new tapestry (aka concert blanket). It had dancing Grateful Dead bears on it.

Next up was the North Mississippi All Stars. I fuckin' love Luther Dickson's chops on guitar. Wherever the NMA play, they bring good old fashioned Mississippi Delta blues to the party. Chris Chew on bass is one of my favorite musicians on the scene. He's a massive black dude who plays a bass that looks like is 18 feet long.

Galactic
We skipped the end of NMA and headed back to the Sunset Stage to scout out a good spot for Galactic. At that time, Pablo and Chris were having a slight delay. Pablo locked his keys in his car and had to wait to get them out. My buddy Wilkins had just arrived and we miraculously found each other during Galactic. Their set was better than average. At Vegoose, they had a series of special guests many of which were hip hop artists. They cut an album featuring several legends of hip hop, but the Langerado gig was old school Galactic.

Their Langerado set was similar to the songs they played during the Colorado run where I caught them three times at the end of the summer. The boys from New Orleans all walked out on stage wearing sunglasses (except drummer Stanton Moore who is an alien and does not need shades to protect his eyes from the sun). They opened up with FEMA, a hard driving slam-funk song with dark political overtones. They also managed to weave in classics such as Crazy Horse Mongoose and Black Eyed Pea, along with Spiderbite and a sizzling rendition of Led Zepplin's Immigrant Song to close the set. My buddy Wilkins left Galactic early and headed over to see Brooklyn indie rockers The Hold Steady. I almost went but was glad I stayed to catch Immigrant Song.

I walked over to the food vendors and skipped the alligator meat and opted for a cheeseburger instead, which would be the only food I'd eat inside at Day 1. I managed to drop $40 bucks or so on water and Gatorade. I only drank one beer and concentrated on smoking tough. We found a decent spot for Bela Fleck & the Flecktones and eventually Pablo arrived with Chris. Bela Fleck's highlight was a smooth cover of the Beatles' Come Together.

The Joker headed over to meet friends from Colorado at the media tent where Trey was giving his press conference. He returned with a couple of adderrals and I popped a half of a pill. It didn't do much overall because I was so tired that it just sort of evened things out for me.

Once Bela Fleck cleared out, we decided to skip Moe and Stephen Malkus' set in order to get a great spot for Trey. The Joker led the way towards the stage and we found ourselves in the middle about 15 rows back. Perfect spot. Anything closer and we'd be crushed. We waited an hour for Trey's set. He was slated to close Day 1 with a two hour set and going up against STS9, which we had all seen the night before. 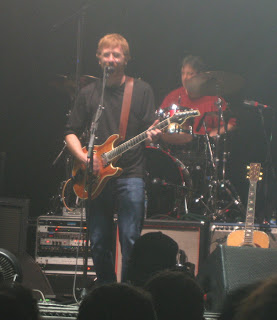 Sober Trey
Trey Anastasio Band came on exactly at 8pm and he set the scene with his opening song, Shine. He opened with Shine the night before which meant that we were going to see some repeats. Shine is a song that The Joker and I make fun of a lot. It seemed like Trey's weak attempt to write a pop song. It actually got plenty of radio air play when his first solo album (post-Phish breakup) was released and they even shot a live video of the song from Red Rocks. Alas, we're not big fans of Shine yet sing along anyway.

I wanted to hear Alive Again and it was one of six songs that Trey did not play on Thursday. I'm sure than only a handful of people saw him the night before and he decided to take the risk and double up on songs because his band probably doesn't know his entire material well enough to do random bust outs and covers. Trey was also very careful to not play any Phish songs. Although First Tube was popular tune played often by Phish (and appeared on Farmhouse), its origins were with TAB.

The highlight of Trey's set was Mud City with Aaron Neville sitting in on keys and First Tube to close the set. He encored with an above average Drifting. During the walk out I commented how it was a below average Trey show and an average Day 1. We definitely had better moments at different festivals. I also knew that I can't judge the entire Langerado on just the first day of a three day festival. Alas, I left feeling fortunate that I got to see nine different bands. However, I also left knowing that nothing really blew me away. Hopefully that's what Day 2 is for.

Here are some random photos from Day 1: 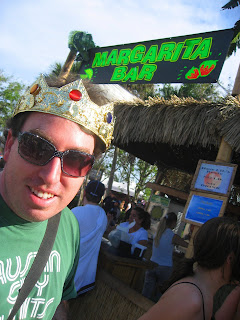 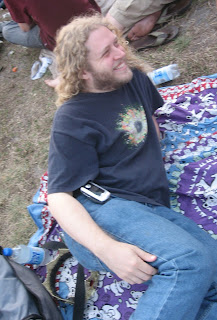 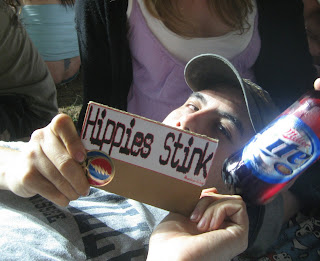