Editor's Note: I forgot to post this quickie recap which I scribbled down on my CrackBerry. I never posted it because I nodded out just before sunrise and before I could finish it! Anyway, here's the second part of the Gorge run...

I woke up a few minutes after sun came out just as all the vampire wooks scattered back into the dens their burrowed themselves under a bank of port-o-potties. I wandered up to the toilets as Mr. Honeybucket was cleaning out the shitters. I thank the Lord for having a decent job because I never appreciate what I do until I see someone vacuuming shit out of a port-o-pottie. I also had an auspicious start to the day because I didn't have to deal with heaping mound of of shit, piss, and vomit -- all discharged from the previous night. A cleaner shitter is always an awesome way to begin Day 2 at the Gorge.

I went back to camp, ate a few Clif bars, drank tea, rolled a fatty, and discussed the second set with my neighbors. They couldn't stop gushing about the Rock and Roll jam. A couple of them got super schwilly on Friday night.

"You go sooo wasted," said my neighbor to his buddy, "You thought Trey was talking to you."

"Braaah, I'm still wasted and stick to my guns. Trey. Talked. To. Me."

Yeah, it was one of those epic nights and it was the start of the tour. Only good things could come for the second day, right?

I met Justin and he gave me a couple of extra tickets for Saturday. He felt a Caspian coming. Awesome foreshadowing, eh? I went on an ice run at the general store and bumped into @ChinaKatSnflwr hanging out. We chatted for a bit and she every other sentence she repeated two words during our conversation -- Phish magic.

Phish magic? Phish. Magic. Indeed. There's something about the harmonic energies at the Gorge, that make Phish and it the perfect match. And as the Joker once said, "I've never seen a bad show at the Gorge." He's right. I think I've been to every show Phish played at the Gorge, and even during the Oxy Years, the show still slayed.

By mid-day my friends from Boise arrived -- The Human Head and his wife, Mrs. Head. They drove up from Idaho to see their first ever Phish show. One of the exciting aspects of 3.0 is going to shows with friends catching their first show and Phishy experience. Since the boys returned in Hampton 09, I've had the pleasure watching my friends react to the emotional rollercoaster of popping their Phish cherry. That list includes... IronGirl (SPAC 09), Benjo (Festival 8), Strawberry Shortcake (Knoxville 09), Iggy (Burgetstown 09), BadBlood (Charlotte 09), and Otis and DiscoSis 2 (Asheville 09). After the Gorge, you can add my friends the HumanHead and Mrs. Head.

I love turning my friends onto music, but Phish is an acquired taste and you really don't know what it's really like until you see a live show. Listening to Phish is akin to wanking off, while seeing them in concert is full blown sex.

The Phish world can be intimidating for a lot of newbies, but luckily most of the community is extremely welcoming. Whenever I'm accompanying a friend who is seeing Phish for the first time, I kinda get nervous because I want them to have an epic time. I know from my own experience that it took a dozen or so shows before I really found my Phish groove. So, I know it might take my friends a while before they finally grasp the entire concept of Phish and feel comfortable weaving up and down Shakedown without being freaked out.

I always considered myself a Deadhead with Phishy tendencies, but it wasn't until Jerry Garcia died that I started racking up shows and became a tour rat. Almost 16 years after Jerry passed away, I've seen 5x as many Phish shows than the Dead -- 230 to 46. I turned a few Deadheads onto Phish -- Bruce, IronGirl and Iggy -- and they now love them with a similar passion as myself, which was pretty rad because I know some Deadheads who can't stand Phish.

With that said, I was excited and nervous about how HumanHead and Mrs. Head would react. They totally went in cold without knowing any of the band's material -- yet they left the show with wide smiles on their faces. They are open-minded people who loved the Gorge. They saw previous shows their in the past, but never Phish. I gotta say, I admire their willingness to drive almost 6 hours from Boise to see only one show. I'm glad glad glad they got a scorcher and left wanting to see more.

The Heads loved Shakedown and the entire concept of the hippie bazaar. My girlfriend and Mrs. Head shared their thoughts on the different styles of fashion they saw from custie glam to hippie chic. I made sure the Heads experienced Shakedown before AND after the shows. Two totally different beasts, but we all had a blast watching all the schwasted spacekids, wooks, and spunions stumbled up and down Shakedown. 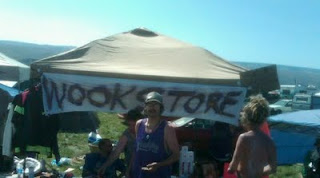 During my afternoon stroll on Shakedown, a sketched-out wook tried to peddle DMT. When I declined to buy any, he instantly lowered the price by $10. When I declined a second time, the guy offered to blast me off... for free... because he was convinced I'd want to buy some afterward. I politely declined his generous offer to get digital, but I asked if he had a business card, so I can contact him sometime in the future. He didn't have one. Why would he? He didn't even have a last name.

So what about the show... overall, it was more consistent than the first night, but nothing could top the Rock and Roll jam from the first night. Although, the came very close on a couple of instances.

We found a spot on the floor on Fishman side just to the right of the soundboard, where a slew of my friends gathered for the last night at the Gorge (Johnnie Walker, Friedman, G Rob, Uncle Ted, and the Heads). We had a good crew and prepped for "Phish magic" and the band to take the stage as the sun to set over the majestic Gorge.

First set opened up was your run-of-the-mill Possum, followed up by some sundown funk and Moma Dance. The guy with the white parrot got his bird into the show! He was denied entry the night before. The parrot was an ominous foreshadowing for things to come.

One of my favorite parts of the weekend happened at the end of Sample in a Jar. HumanHead tapped me on the shoulder and said, "This song is badass!"

That's funny because if I make a Phish mix for noobs, I always include Sample -- it's kind of a short song and has crossover appeal. I was stoked the Head liked one of the "Phish 101: Intro to Phishdom" tunes. Next summer well introduce him to "Phish 201: Year of the Funk."

During Ocelot, I told my friends to pay attention to the lyrics because the song is all about Trey's oxy abuse. I happened to be be wearing my Ocelot lot shirt, which now has a 75% success rate.

What a contrast from uppity, speed-grass and Poor Heart to the slowed down, almost valium-dipped version of On Your Way Down. My friends already got a sampling of different musical styles and ranges Phish could play at any given moment to classic rock, blues, funk, and country/bluegrass.

By the way, Page destroys all the covers he plays and we got a bit of morose-blues guitar from Trey during On Your Way Down.

Wolfman's jam delved off into a could "Medicated Goo" aspects and it was so sultry that my girlfriend kept smacking me in the ass, and Uncle Ted had to unbutton his shirt to boogie-down bare chested for the rest of the jam. Mike stomped down on his fight bell at the end of the Wolf-Gorge jam and they rocketed into Maze. Yeah, that Maze simply kicked my ass. Love the tension-release points. The orgasm point was spot fucking on and the guy with the cannonfetti nailed the precise moment. Nice work on the trigger, brah.

Wilson was thunderous and as loud as you'll get at an outdoor venue. My ears were ringing through setbreak after the eardrum shattering echo of Trey's guitar after the crowd chanted "Willllllllll-son!"

I turned around during the "Can you still have fun" part and G-Rob was grinning ear to ear. I've caught more Fluffheads than I would have preferred in 3.0. It seemed like they were playing it (along with YEM) every other show. The Fluffs have slowed down a bit, but the Albany Fluff in 09 might be one of my favorites since they returned. The Gorge Fluff was tons of ass-shaking fun. The crowd was feeding off the band's energy and vice-versa and nothing can go wrong during those symbiotic moments. Sadly, that's one of those "in the moment" experiences that you can't replicate when you hear a recording of the song after the show. Alas, Phish reached a stupendous peak at the end of Fluff as my girlfriend screamed "I love pills!" The boys walked off the stage with the crowd reeling in jubilation, just a few minute s short of the 90 minute mark. I sincerely hope they continue to play 90 minute searing first sets from here on out.

When the first set ended, HumanHead said "Ninety minutes in, and I'm starting to get what all the fuss is about."

Welcome to the cult.

Second set was pretty insane. Case in point was: Tweezer > Caspian > Sand > Tweezer > Birds > Waste > Golden Age. The only lowlight in the bunch was Waste. They teased 2001 more times than I could count. I'm not the biggest fan of Caspian, but it really wasted that bad this time around. That's what I love about Phish -- they can bring me around on songs on the bottom of my "MUST HEAR" list. The Birds must have been for the folks with the B-I-R-D-S sign. At different points, the D person was absent and it said R-I-B-S.

Reba was a crowd favorite and they lapped up every bit of it. Antelope included a bit of Reba whistling and tons of other teases (Golden Age, Tweezer, Sand). Check out the official video.

The three song encore was delicious, especially Sanity, which I would end up singing the lyrics the rest of the night.

After the show, we headed out to Shakedown so the Heads could see late-night wookery at the bewitching hour. They were impressed, entertained, and horrified at the same time. I loved it. I almost got violated by Gumby and we couldn't figure out why some dude was dressed up like Julius Ceasar. Back at the campground, I wanted to ease the pain on my sore hip so I grabbed a Vicodin, only to drop in on the ground. I dunno how we found it in the plush grass! Nice catch, eh?

We spent the rest of the night talking about the wonders of the Gorge, the TV show Hoarders aliens, the impending financial implosion, and Phish magic. That's when I nodded out in mid-sentence about how awesome it would be if lanterns had USB ports to charge iPhones.

Yes, ChinaKat was right. Gorge is the epicenter for Phish magic.

"I politely declined his generous offer to get digital, but I asked if he had a business card, so I can contact him sometime in the future. He didn't have one. Why would he? He didn't even have a last name."

You give the best reviews online, hands down. Good angles on the scene, much needed wookery discussions and plenty of 'I've been there' scenarios.
Cheers to a good pint in Hollywood!

I was the Caesar! It was my birthday. Nuff said.