After a 2010 which saw me on the road traipsing after my favorite bands like I was a full time tour rat (I was trying for 50 shows in my 50th year), 2011 has turned out to be pretty quiet on the live music front for me. I saw Phish's New Year's Run and two of the Bethel shows. I did SuperBall IX and short of a Mclovin show and 1 Furthur show I was unable to get out there but it was not for lack of trying. I also missed Gathering of the Vibes this year where FURTHUR headlined so last nights Albany TU show which I will always refer to as the KNICK was only my second of 2011.

The Knick was home to an iconic live recording released by the Grateful Dead: Dozin' at the Knick (the original name of the TU Center was the Knickerbocker Arena and then the Pepsi Arena) for us Deadheads it was known as Dosin' at the Knick. I was present at these shows, newly sober, slightly bewildered and sought out the company of my fellow Wharf Rats for support. I saw the Grateful Dead live only a few times after this largely because the death of Brent Mydland hit me hard and the scene for me was just getting ugly and frankly the playing sloppy.

I took a break from the live music scene but once a deadhead always a deadhead and I started seeing Phil and Friends, Ratdog, the Other Ones, The Dead, Rhythm Devils etc beginning around 2000-2001. The last The Dead show I saw in April of 2009 was a snoozer, so I was pleasantly surprised when I attended Furthur at Utica in February 2010.

If you want to say Furthur recreates the Grateful Dead experience your missing the point. Go see Dark Star Orchestra. With Furthur, Bobby and Phil have attempted to take songs from the vast Grateful Dead catalog and put their own spin on them. They have added some new songs and reworked some old songs and added some covers too. John K isn't channeling Jerry, he isn't playing Jerry note for note but I feel he captures the spirit or flavor of Jerry. Let's face it no one can replace Jerry and I think Phil and Bob knew that. My old roomie doesn't like the band without Bill and Mickey, but Joe Russo is one of the best young drummers in the business and holds it all down with a youthful exuberance in a less is better kind of way.

Best friend Kim and I enjoyed dinner at El Loco Mexican. Our server noticing all the tye-dye in a largely hipster neighborhood (El Loco is around the corner from Lark Street. If Albany has a hipster locale it would probably be Lark Street) asked what show was going on at the TU Center. I mentioned it was Furthur, and then added "two of the surviving members of the Grateful Dead" when he looked slightly puzzled. At Phish shows I'm the old lady of our bunch but at Furthur there are plenty of folks with a lot more grey in their hair then Kim or I. Granted we color our hair!!

We left our cars up in Washington Park and walked down the hill to the TU Center. Shakedown was in full force early on as it has been unseasonably warm in Upstate NY short of that freak October snowstorm. We passed on Shakedown kind of a been there done that attitude and went in right before show time. I had to stop in at the Wharf Rats table to say hello to my awesome pet sitter and pfriend Amanda. Kudos to Amanda for her service. She tirelessly works the tables at Furthur, Phish, DSO, and Umphreys shows. Say hello to her this weekend at the Calvin Theatre (MA) and Ithaca DSO shows. 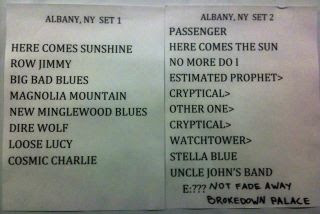 Set I opener was Here Comes Sunshine. This song was retired from rotation before my GD touring days. The first time I remember hearing it live for sure was The Other Ones show at the TU Center aka Pepsi Arena circa 2002. This was the first song from Wake of the Flood album that was performed last night (it is the 5th song on WOTF). Row Jimmy followed also from Wake of the Flood (3rd song on WOTF). Row Jimmy along with Black Peter were staples of my touring days. Love the harmonies but I can take or leave the song .

After opening with two John K vocal leads, Song III turned over to Bob. It was new-ish song Big Bad Blues. Last year Bobby popped up with a video post on his Facebook page saying "Hey Homies this is a little bit of what Im working on". Big Bad Blues is a work in progress. Lyrics by Robert Hunter but Bobby has been tweaking them. Many of the songs in the GD catalog have references to playing cards. Add this one to this list. Although its a blues song its gotta a funky twist too it. As a poker player I approve. Next was the cover of Ryan Adam's Magnolia Mountain, Since the first time I heard it at Furthur Utica it has only gotten better. The back-up harmonies of Sunshine Becker and Jeff Pehrson add a richness and depth to John K's lead.


New Minglewood Blues (another cover) once again featured Bob on lead vocals . The original version dates back to the 1920's and was recorded in the 1930's. Bobby has altered the lyrics over the years adding, repeating, forgetting them. Dire Wolf and a trip to a card game in Fennario followed. The second of two songs with card game references last night. Loose Lucy and Cosmic Charlie closed out the first set. How can you really go wrong with those two songs as a set closer. Once again stand-out harmony on Cosmic Charlie. It was a treat considering the horrible acoustics that muddied the song this summer at SPAC.

Passenger was the first song after an intermission that was almost as long as the first set. Once again the supporting vocals made this song flow. The Beatles - Here comes the Sun followed. Whereas Set I may look like it was all over the place and disjointed (it did work) Set II began to flow and segue seamlessly. I think the new arrangement with John K and Phil switching sides so John K can see Jeff Chimenti is working. John K, Bob and Phil also seem to be closer together and there seems to be more of an intuitive playing going on now then a year ago. No More Do I (a Phil and Friends tune ) threw me for a second with John K back on lead vocals. Then it was the Reverend Bob Weir's turn to step up to the pulpit. He took us thru Estimated Prophet, handed the sermon over to Phil for Cryptical Envelopment and I knew from the segue jam what was brewing was going to be a tasty and ominous That's it for the Other One. To me this is a triple D song: Dark, Dank, Dirty. I liken it to Phish's Down with Disease. In my GD touring years this song at first used to scare me until I embraced it. It was also done mostly without the Cryptical lead in live at least as performed by the GD during my touring years. The jam went back into Cryptical and then what followed was an amazing All Along the Watchtower. I've heard tons of different versions (both live and recorded) of Watchtower including author and original performer Bob Dylan, The Grateful Dead, RatDog, Dave Matthews, U2, Neil Young, Hendrix, Grace Potter and Pearl Jam this one was one of the best Ive heard. I credit Joe Russo to laying down ferocious licks on the drums to that. It had an energy that is sometimes sorely lacking from this song. I also felt it spoke to the Occupy Wall Street movement:

Businessmen, they drink my wine, plowmen dig my earth
None of them along the line know what any of it is worth.

Stella Blue followed (the third and final tune from Wake of the Flood). Once again John K handled the lead vocals. At some point a very drunk middle-aged dude in front of me asked Kim who the lead guitarist was. She deferred to me and I had to explain to drunk dude his name is John Kadlecik, and then K A D L E C I K when I was given a vacant stare. Still another vacant stare and I said he played the Jerry part in Dark Star Orchestra (another dumb look). Drunk dude finally looked at me and yelled "He's fucking great" and fist pumped the air. I am still caught off guard when people go see a show and have no idea who is performing. I mean he didnt even know about Dark Star Orchestra, its like he was just dropped into the middle of a concert from outer space!

Uncle John's Band closed Set II. Ive heard UJB so many times but still love it. Id sing it as a nursery rhyme if I had a baby to sing it too. Encore as usual started with Phil taking the mike to implore people to become Organ Donor's. I could say the NFA aka Not Fade Away encore was standard and a little lacking energy on crowd refrain but that was our fault not the band's. A beautiful Brokedown Palace closed out a nice double encore. Once again beautiful harmonies.

When I went to put on my coat it was soaked with beer. I realized that's probably why the very drunk couple from Long Island behind me offered me their weed. As I tweeted you must be embedded with hippies when you leave a concert smelling like a bong and an ashtray and covered with beer.